I've been playing a fair bit of Command and Colors Ancients and Battlelore lately and plan to put on a large Battlelore game for our MayDay convention. I think I will be using 28mm miniatures on my 4" hex mat and I wanted to have a nice river to use. In general the next year will be about improving or replacing old terrain more so than painting new figures.

These river pieces are all 60mm wide and either 100, 200 or 300mm long. This fits nicely in the hexes I have and can also be used to other systems like DBA and HoTT. There is roughly 10 linear feet of river all told. 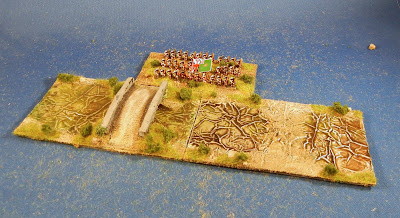 In addition to the straight sections, I have done some curves (and I may do a few more) as well as two bridges and two ford. I've pictured one of each above with some 6mm AWI troops. The bridge is a Timecast bridge I have had laying around.

The rivers are reasonable functional on the table (pardon the colour shift due to crappy winter light). They will look better when there are other terrain features in play. I've built rivers like this before and they are quite durable over time. 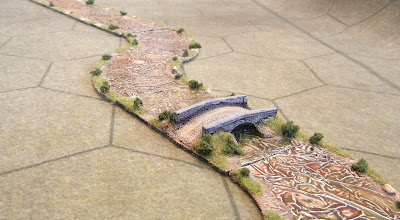 Up next: I have some 28mm dark age cavalry through the basing process and drying. I also have some 1/72 Egyptian chariots that I am almost finished painting. And there are a bunch of 15mm Flames of War French infantry that I will start cleaning tomorrow. After that--maybe some 28mm Roman auxiliaries and perhaps I will look to rejuvenate my trees.
at 11:18 AM

Thanks Tim; I'm pretty happy with how it turned out. Should be durable as well (would have put trees on an more extended shoreline but that creates storage hassles and breakage).