Sadly, no Hallowe'en gaming this year. But I did finish off some scatter terrain in the hope of gaming in the future! 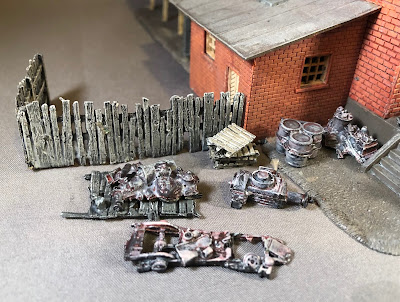 These are a bunch of HO-scale track clutter pieces in metal that came with an old train village set I bought, maybe 10 years ago? I'm working hard to clear up lingering painting project this winter. 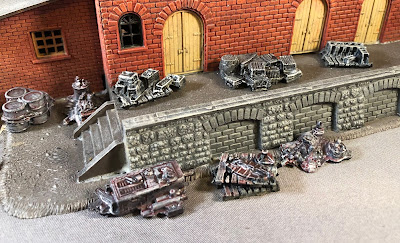 They go fine with the HO-scale Gotham buildings I have. They show a bit greyer in these pictures than they actually are. Excepting the wooden fence, they are all too small to really work as LOS blocks but they could function as objective markers. 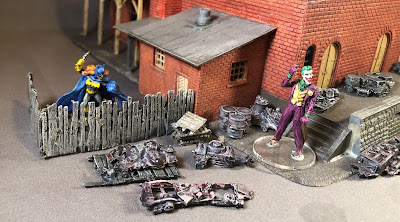 Up next: Hard to say. I have been working on some 54mm AWI figures but they take such a long time to paint! I also have some 28mm generic army guys that Scott dropped off underway. 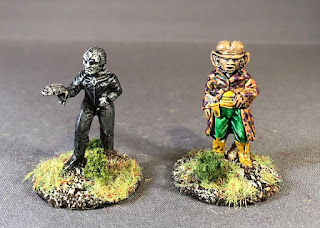 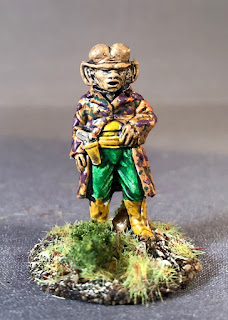 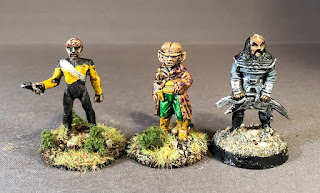 I bought a second Quark, thinking I could lop off the head and attach it to another body to make a Rom. But no joy there. And I think recent experience demonstrates I don't have the lobes to sculpt a head freehand. So I am carving down the second quark to make a Nelix.
at 4:00 AM No comments:

Back to the Future

And odds and ends post this week. I finished off an order from Crooked Dice with Doc and Marty from Back to the Future. 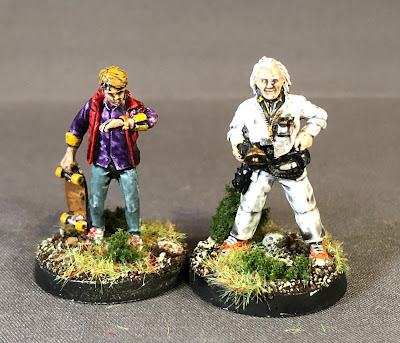 Nice figures. Unfortunately the lighting washed out the details on Doc's white jumpsuit. 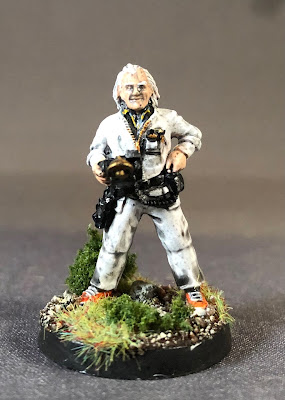 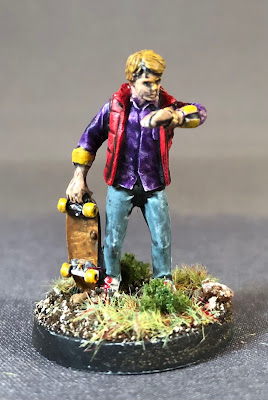 I also ordered a few ST:TOS not-figures from Space Vixens from Mars. 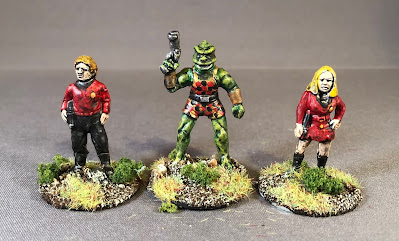 The red shiorts are okay, I guess. 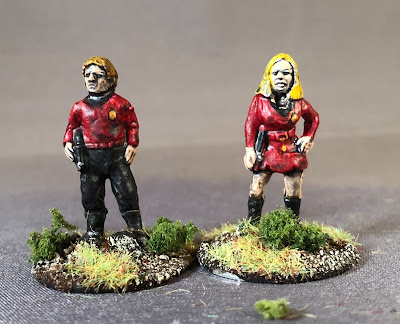 The Gorn was pretty good. I had forgotten the whole lederhosen look of the Gorn's outfit. The ray gun makes going sense but a pointy piece of obsidian would have been better. 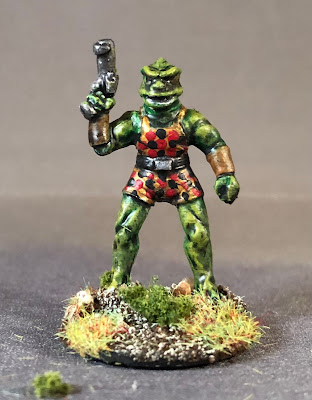 Up next: Finished off my ST:DS9 crew.

I painted up some Ghostbusters from Crooked Dice Miniatures in the spirit of the month (a little pun there, for Terry).

These are characters from the 2016 reboot; they also have figures from the 1984(?) original movie. 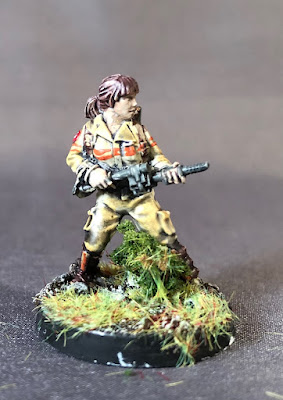 These are pretty nice figures and I only see a couple of painting goofs in the close-ups. 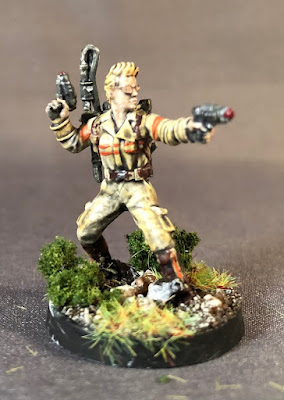 I used movie stills to try and replicate the costumes. 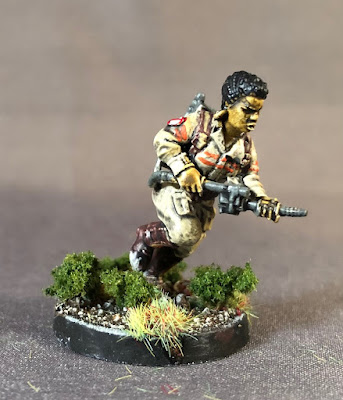 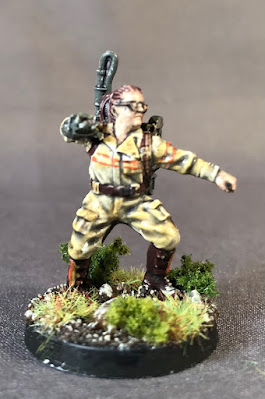 I've no idea who this figure (below) is supposed to represent (don't recall the 2016 movie enough to know). 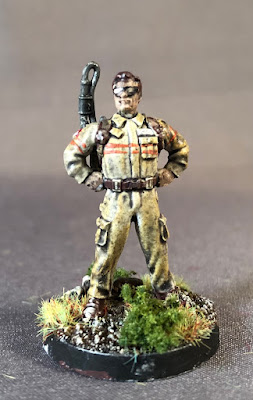 These figures are much better than the Ghostbusters I have from a game (as one would expect).

They do, however, fit in pretty well with the ghosts and ghouls from the board game.

Up next: Maybe some random Trek. Maybe some 54mm AWI? Hard to say at this point.

Crooked Dice miniatures recently released some A-Team figures. These are, I think, better sculpts the Foundry B-Team, which is the other option I can find. 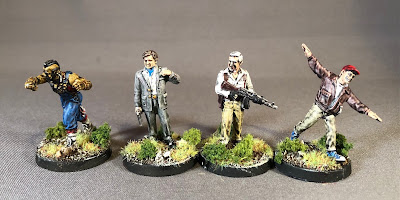 Hannibal is a nice figure and Crooked Dice actually has a second Hannibal option.  Oddly neither seems to be holding the correct weapon for the character (a stainless Ruger Mini-14). 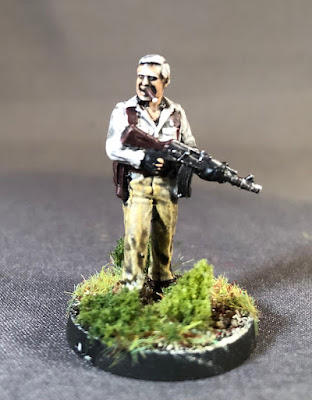 Overall, these are nice sculpts that capture the essence of the characters. I see I slopped Faceman's ascot. 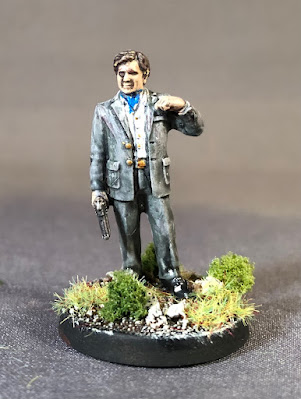 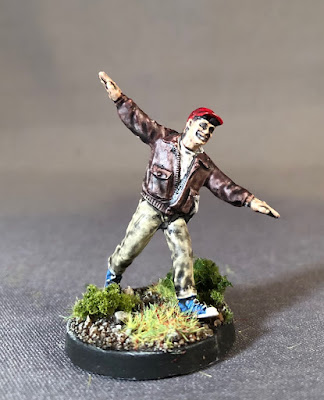 The BA Baracus figure is very dynamic which make sit hard to paint and photograph (his punching arm is in the way and casts shadows. Looks like I need to go back and darken his eyebrows. 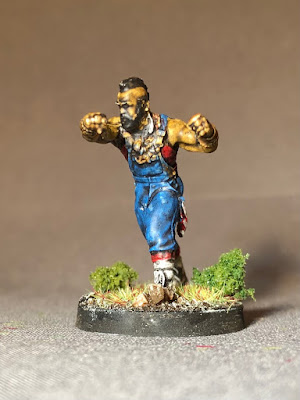 I was pretty happy with the skin tone I managed to get. 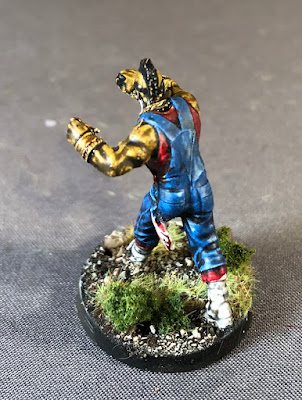 The figures scale well with other Crooked Dice offerings and are a bit smaller than Tangent Miniatures' Dirk Benedict figure. 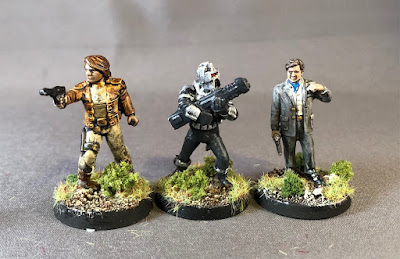 Up next: No Zombtober for me this year but I will be finishing up a bunch of 28mm odds and ends.