As I work my way through the Zombicide: Toxic Mall box, I decided to switch up the skin colour of the toxic Zeds.

Apologies for the photo quality; I had some weird lighting effect happening, perhaps interacting with the white undercoat and washes for the skin. I finished half of the toxic zombies but didn't post one of the poses because it was a bit over sexualized.

The basic zombies are cast in grey and the toxics are casting green so I went with roughly those colours for skin. I'm pretty happy with the results. I wanted a slightly more luminescent green for the skin but whatever. The effect is clear enough and you can tell which is which (below). 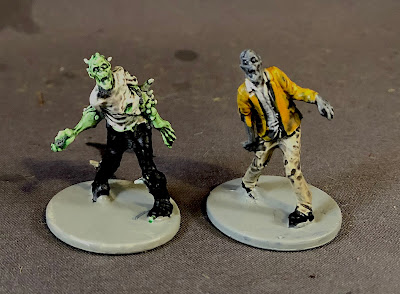 I wasn't sure what to do with the toxic boss. I figured red on white jockey shorts was a nice contrast to all of the bumpy skin and horns. While this post brings an end to Zomtober, I so have a few more Zeds in the pipeline that will appear over the next few weeks. 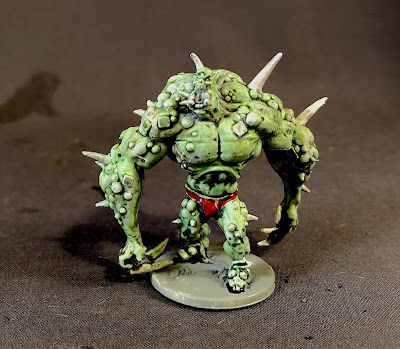 Up next: A church, some gangsters and some zombies.
at 5:00 AM 2 comments:

At the model train swap meet last weekend, I picked up a couple of cheap buildings. My favourite was this apartment building (there are never enough places for people to live (or eat!) in model towns). This building was $6 built. All I did was paint, wash, and dull coat. 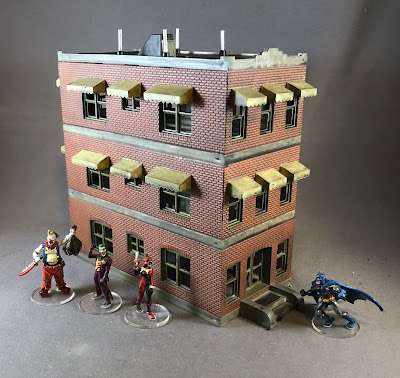 All it needs now are maybe a few decals and some blacked out glass installed in the windows (I seem to run out of clear plastic packaging). The building would be the perfect home for the United Clown Party (posed above). 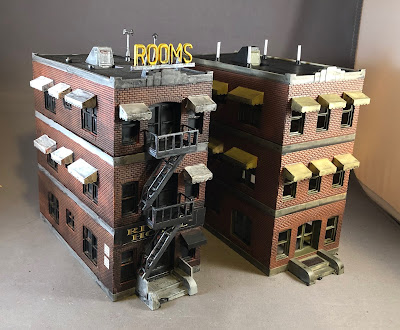 I have a different version of this building already (a rooming house). It wasn't until I was working on the newer model that I noticed that the person who built the roaming house model reversed the upper floors to put the fire escape on the front (thereby blocking the front doors?). Obviously the escape on the back makes much more sense. 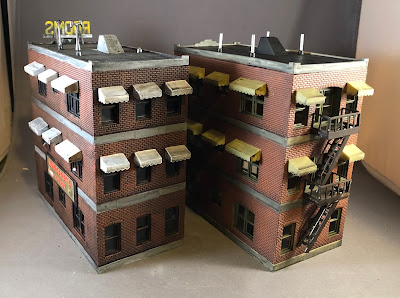 Up next: More Zeds, a church and maybe some gangsters. And then even more zombies.
at 9:11 AM 3 comments:

Not my best entry for Zomtober, but sometimes you have to post what you have done. And today that is nine Zeds from the Zombicide Toxic Mall box painted up as athletes.

The repetition of poses in the Zombicide boxes is a bit of a grind, so I tried to make the runners (necessary for the Zombicide rules) into something useful. Thus four male soccer players and five female basketball players--perhaps a team bus was caught in the apocalypse?

Up next: I have a few buildings from the model railway show (three buildings for $17? score!) underway plus more zombies, including some toxic zombies with a different approach to the skin colour.
at 5:00 AM 1 comment:

I hosted a Halloween-themed game at the club this week, using the Gotham adaptation of Tribal and a bunch of horror-themed 28mm figures I've collected over the years. Chen, Richard, Terry and long-time lost club member Mike played along with me. 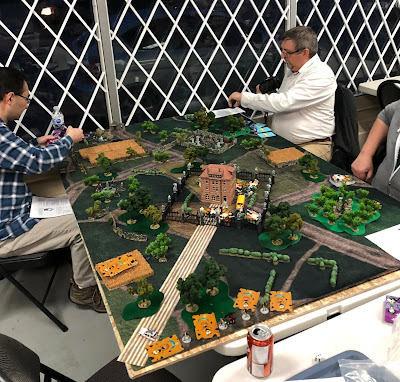 Each faction had a set of objectives:


There were also three groups of cultists summoning various monsters and ghouls that attacked whomever was handy. 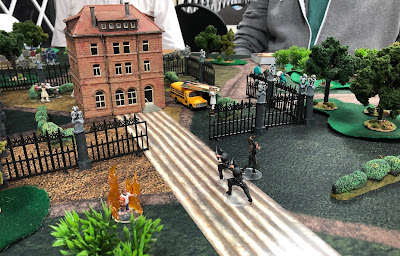 The Arkham crowd moved out of its fenced yard and immediately ran into random monster trouble with a Gentleman and, soon thereafter, a giant worm. 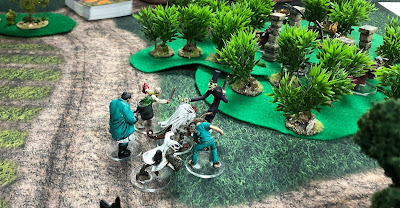 Penguin made a bee-line for Arkham to spring some villains but had to tangle with a toothy horror. 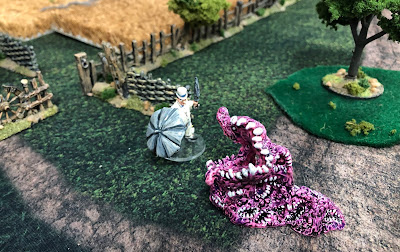 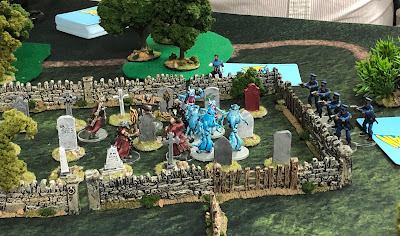 Dr. Brown retreated to within Arkham while the Ghostbusters lurked around the edges, sniping. Having driven back the pink monster, Penguin moved to quickly dispose of his cultists (a good move as it cleared the path to Arkham for his troops). 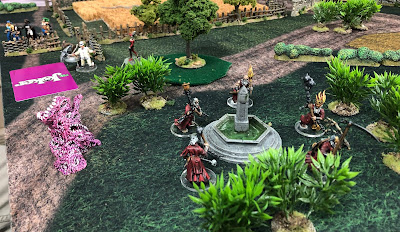 Bats and Katana ventured into Arkham and then set upon the warden. This weakened both of these teams and gave Penguin an opening to breakout some friends. Bats took it on the chin from a lowly gang during the resulting melee. 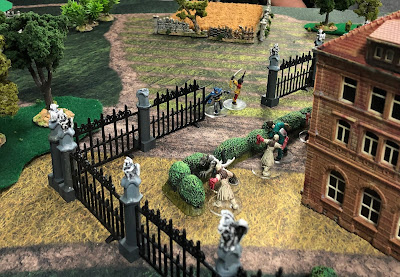 The Ghostbusters moved up, carefully sniping at anyone with range. This was tactically challenging to play and the Ghostbusters were vulnerable to melee attacks. Playing a move-and-shoot pattern allowed me to concentrate good activation cards on the shooters. 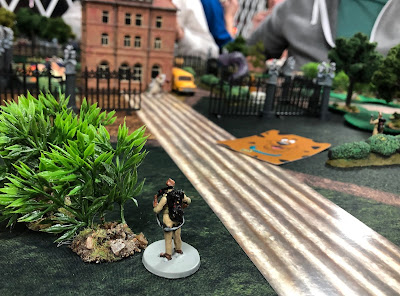 The game culminated in a three-way fight inside the grounds of Arkham. Penguin moved to break out some villains but got jumped by Bats. Batman's cards were ridiculously good and Penguin was driven off. But the Dr. Brown decided Batman would make great patient for his asylum and moved in to defeat Batman. Which kind of sets up a rescue scenario as a next game. 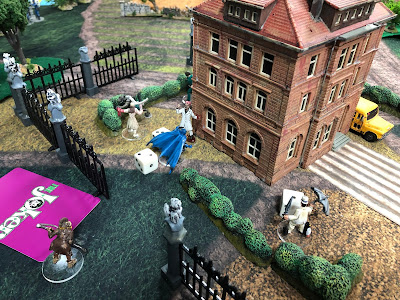 Overall, everyone had fun, perhaps despite the scenario! The game was close on points (9,10, 11 and 11) with the Arkham crowd being declare the winner for achieving closest to his actual victory conditions (Penguin was right behind and needed one more turn to snatch victory).

A couple of lessons:

The International Rules of Zomtober require one Zed per week. I am a bit behind on painting this week but I did finish a 28mm Frankenstein kit from Pulp Figures. 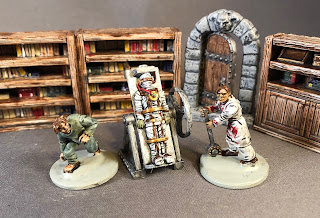 Here we have Igor and Doctor Frankenstein animating a corpse. Overall, happy with the figures but I see I was overly enthusiastic with the grey paint on the bases. 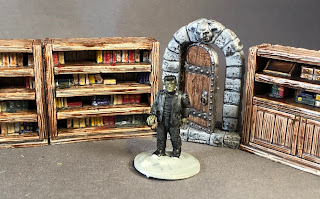 Then we have the Monster (which I'm calling a Zed). Nice figure. I fiddled a long time to try to get the black to work properly (an increasingly desperate set of washes, dry brushings, and dips). 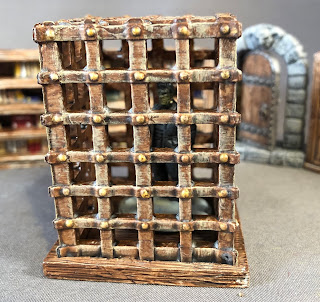 Freddie sits in the cage I bought last year from Red Claw pretty nicely. Overall, a sweet little set. I chose to paint the doctor and Igor a bit more modern-looking than might be appropriate to fit in with my pulp and superhero figures. 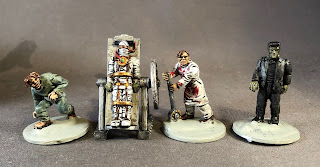 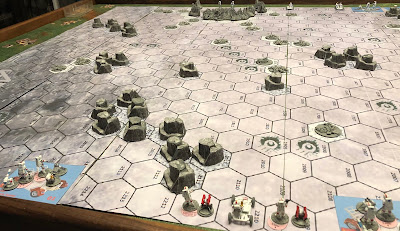 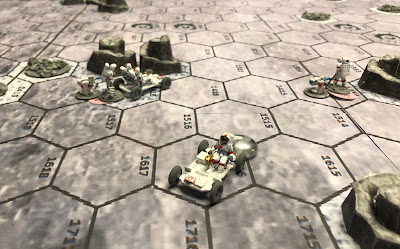 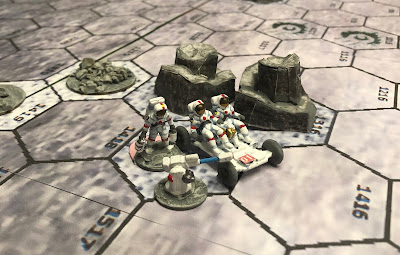 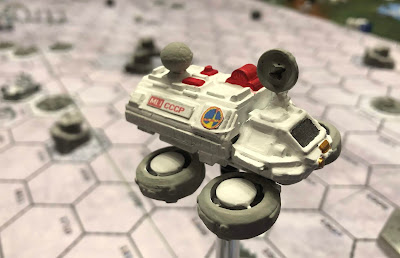 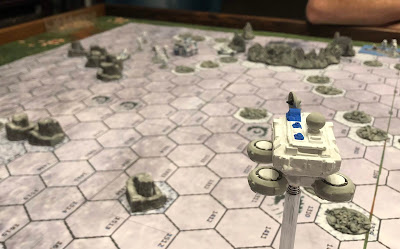 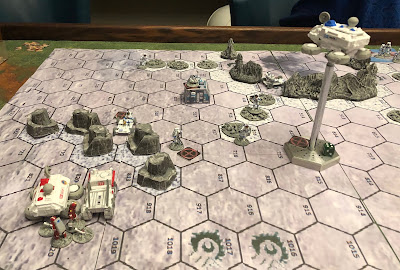 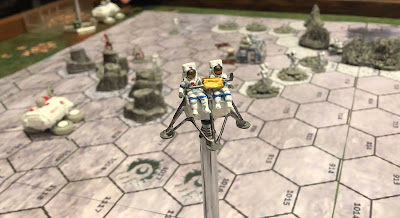 Overall, a pretty fun game that would be easy to teach and you ould play two scenarios in an evening.
at 5:00 AM 6 comments:

I'm grinding my way through the Zombicide Toxic Mall box this Zomtober. A challenge with these boxes is limited poses. I thought I would do a small number up as medical staff from a hospital or clinic that had turned.

Overall, they are a touch drabber than I had hoped. But they fit the bill.

They are a little smaller than some Heroclix figures that I have along the same lines.

Up next: Some Astronaut gaming, some Zed-soccer teams, and maybe some more pulp.
at 5:00 AM 2 comments: 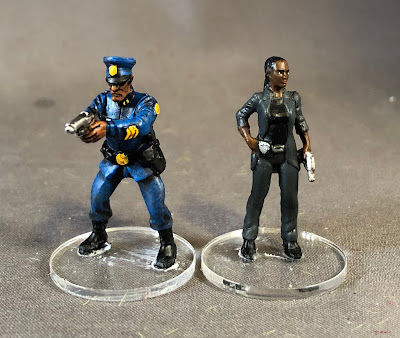 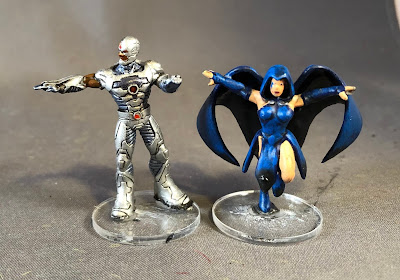 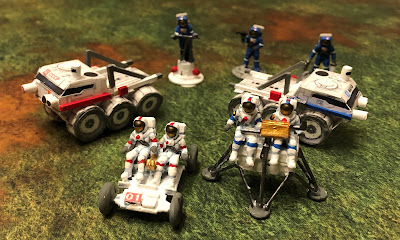 With October upon us, a young man's paint brush turns to zombies. These are from the Zombicide: Toxic Mall expansion I picked up last year.

Nothing too special here. Lots of runners and some new poses. The painting is nice and easy!

Up next: No club gaming for me this week because union business takes me out of town. But I do have some heroclix that I've just finished painting. Plus more Zeds are on the way.
at 5:00 AM No comments: