I finished up a few more 15mm lizard riders from my Battlelore pile. I am excited to be almost near the end of the goblins.

Up next: I have a bunch more foot and some dog or wolf riders and the goblins are done. Then onto the remaining dwarves.
at 10:30 AM No comments: 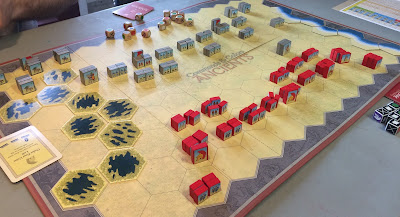 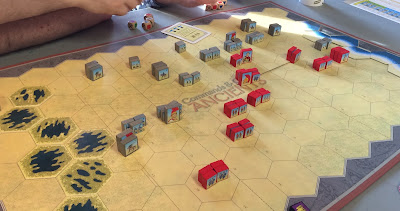 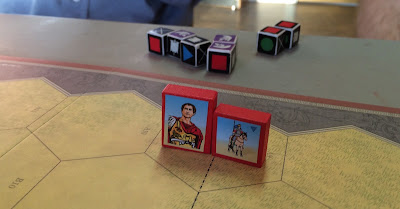 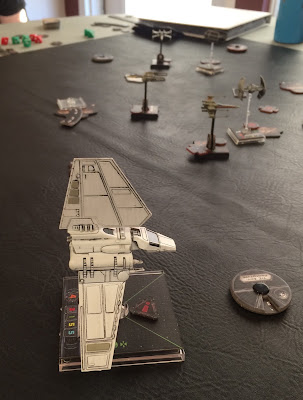 Up next: Some more 15mm fantasy figures are drying. Then I'm not sure.
at 1:47 PM No comments:

The good weather has kept me away from the painting bench these past few weeks, but I have a few pieces that I finally finished. 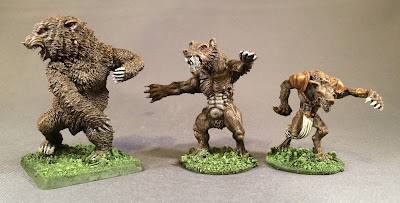 As I was painting up the 15mm Battlelore figures, I also picked up Dragon Rampant and started looking around for a few monster figures. Kevin kindly gifted me three were/dire bears/wolves. 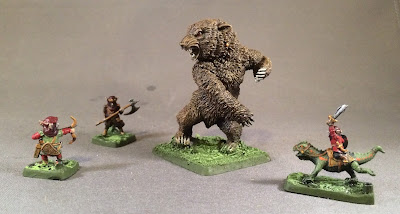 These are 28mm sculpts so they suitably dwarf the 15mm goblins I have posed them with. I might go back and put some more red in the eyes as the wash dulled the original eyes. 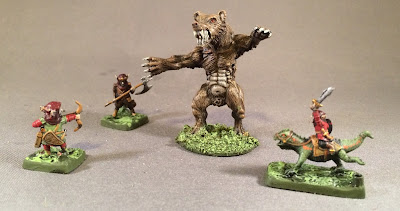 I didn't have any spackle with which to match the Battlelore bases so I just sanded and painted to match. 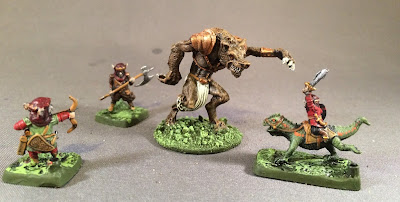 I've also been cleaning out some stuff from my shelves to donate to the club auction. There will be lots to buy! 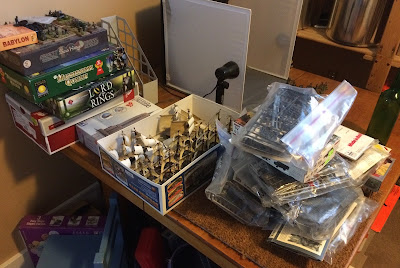 Up next: I plan to run a game of CCA (Romans v Romans) at the club this week and even got far enough along to have picked out the units needed for the scenario I'm running. I also have a bunch of goblin lizards riders almost done.
at 5:55 PM 1 comment:

I was out at Bruce's on Tuesday for a second game of Fighting Sail (an Osprey set). I recall quite liking the rules the first time we played. The mechanics are very slick with variable movement, easy combat and simple damage tracking. 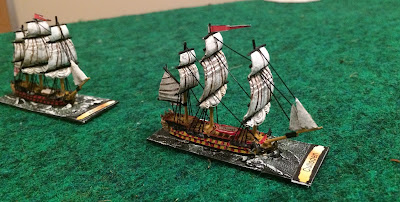 Things started out okay, with both fleets running with the wind towards contact.

Then things got really good as my rolls turned hot and one of Bruce's ships took a real pounding. We had a coupe of ships disintegrate after a combination of close-range rakes and hot dice. I wonder if the ships were a bit brittle? But so far so good. 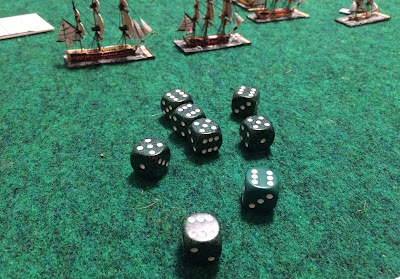 Then we ran into a real mechanical problem. The ability of the ships to fall with the wind means that when the game gets into a knife fight, whichever player rolls lower on initiative (and goes second) has a huge advantage. We had turn after turn of rakes as the "loser" in the initiative roll swung into the best position. While the initiative winner fires first, if you are getting raked, you don't have much of a target! 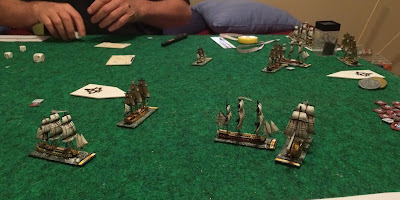 This seems to be a design error (as one of the "advantages" you can have is a great admiral who can increase your initiative roll--pretty much the last thing you want). We couldn't figure out an easy fix (which was too bad as the rest of the mechanics are awesome. Maybe simultaneous orders? But that is hard to incorporate give the variable move distances each ship gets each turn.

I had fun and all but this seems like a pretty major (and obvious) issue with the rules (unless we were playing them incorrectly--but I don't think that was the case).

A few more goblins have rolled off the painting line. First up are some of the goblin lizard cavalry. The sword turned out nice on this one, hey? 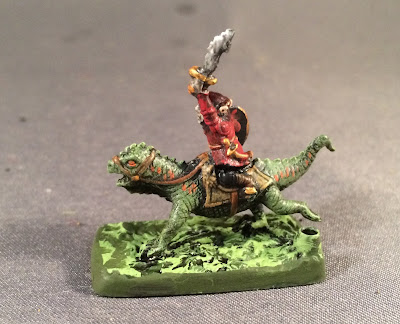 These guys were from the original base set and painted up nicely enough. I will vary the tunic colours as I move onto the rest of them to create more of a horde effect. I should have done the lizards' claws.... Maybe I'll go back and do that.

I also did some archers. I think these guys were from an expansion. All are lefties and are a bit bigger then the goblins in the original set. 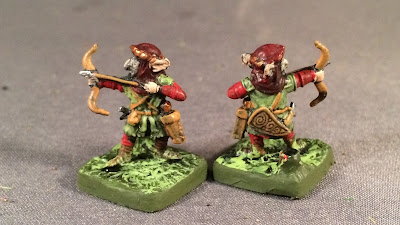 There is some nice carved detail on these guys (e.g., the bow case).

Finally, I did up a unit of heavier goblins from one of the expansions.

Up next: It is club night and I'm working larger were-beasts that Kevin gifted me.
at 5:00 AM No comments:

I started on the Battlelore goblins this week and finished a couple of batches. The fellows with the scimitars are from the original boxed set and are about 18mm tall. 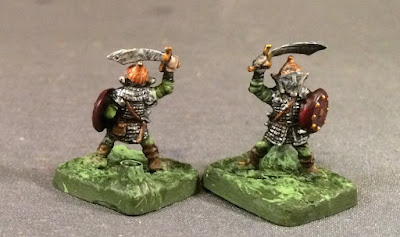 I have painted a lot of goblins green over the years and I decided to use a muted flesh tone for these guys.

I also painted up some halberd armed goblins. These guys are a bit bigger (they were from an expansion). They remind me a bit of Drow.

Up next: More goblins, include some lizard cavalry!
at 5:00 AM No comments: