A few Acres of Snow

I dropped in on Bruce last night and we had a third go at A Few Acres of Snow. Again the French won through settlement but we had a few new experiences. The French besieged Halifax as soon as the British occupied it, which put the British back a bit. They eventually re-took it (they are better able to play militarily. Ambushing also played more of a role. I thought the game was quite close until the final count came in clearly for the French. 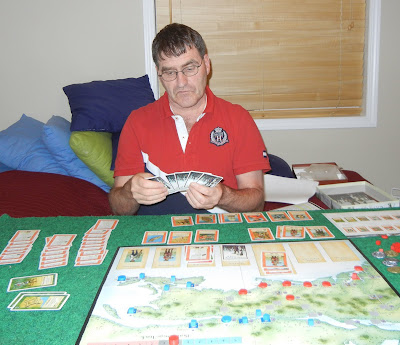 I've been reading on line a discussion (or as close to a discussion as people have online) that the British can win an entirely military game (thus the game is "broken"). I wonder about that as a strategy--can the French counter by ambushing and raid 12 cubes away from the British? I also wonder if the British game is not to grab the settler cards early and slow the French way down. We'll have to try that. 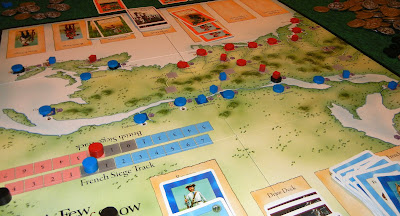 Up next: I have some 1/72 Egyptians underway--need to do some trim work and the base them. I also have the last of my 28mm mounted dark ages underway to fill out the ranks for my MayDay game. I await delivery of my epic Battlelore expansion--hopefully in time for the club on Tuesday.
at 6:54 AM