Craig passed me a couple of boxes of Caesar New Kingdom Egyptians to paint and I have managed to finish off the foot. The chariots I will do over Xmas, I think.

First up are four bases of heavy foot. Sorry this group shot is a bit soft--not sure what the issue was. And Thanks to Dave for the refresher on Impetus base sizes as well as the army lists. 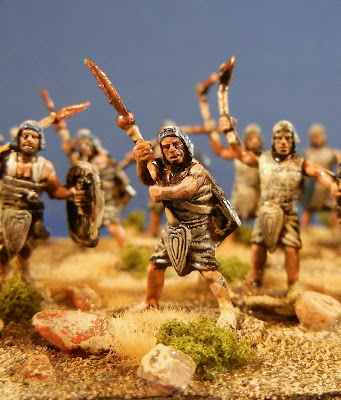 These are based on 120mm frontages and I think these fellows are 40mm deep (heavy foot). The Caesar figures are very nicely done. 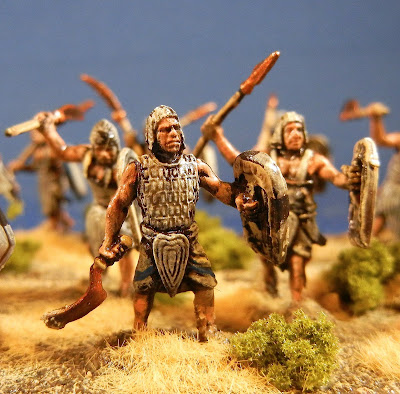 I'm not a huge fan of ring hands and separate shields in 1/72 (although the effect is lovely) but these guys went together far nicer than, say, Italeri kits with similar assembly. 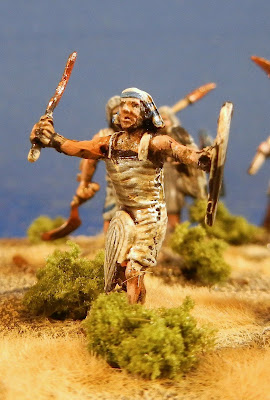 Up next: Some skirmishers are drying, then four bases of bow and four bases of light infantry and that completes the foot. Add in four chariots and Craig has the minimum army needed to play. I see he has quite a set of boxes of opponents sitting in his basement. I also have some 28mm mounted dark age fellows for my MayDay game.
at 8:03 AM

Thanks Paul; that is very kind given your own 1/72 stuff. I'm quite happy with the basing. Arid but not too plain.

Thanks Nick; nice that anyone notices! I was pretty happy with how these took the wash and I was wringing my hands a bit after the painting because they looked so flat (even ended up highlighting the flesh to try and improve them--which I never do). All hail the magic dip.