A small clutch of Pulp Figures gangsters for today.

I painted these using more washes than I normally would to mix things up (both as a painter and so the figures look different from the rest of my gangsters). I also tried hard to vary their skin tones. 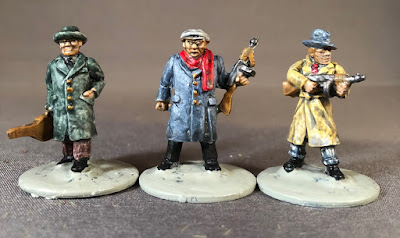 Mostly I'm happy. I see the guy in the tan jacket (who was supposed to be wearing pin strips) looks like he's wearing PJ bottoms) and the fellow in the brown jacket has a wicked wash pooling issue (totally not visible in person). I see the bases also need a touch up. 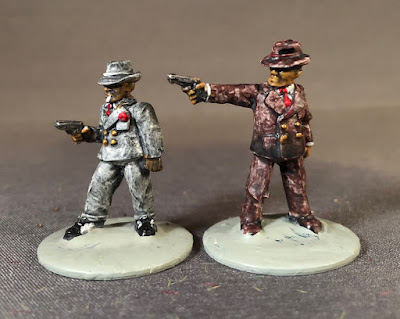 I also finished a tiny bit of corrugated sheet metal fencing that came with some model train stuff I bought who knows when.

Up next: More gangsters, I think, since I'm on a roll.

I found a bunch of Pulp Alley figures in my stocking at Christmas and started to paint some of them up.

First up are some denizens of the Precinct house. I think I got the cops colours to match but I see my wash on the new figures was a bit heavier.

There are also some customers. Apologies for the soft focus. Great sculpts. 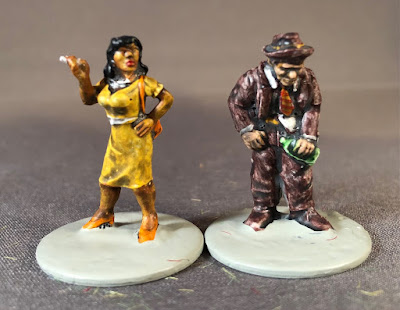 I also had a package of various villains. Two looks a lot like character from the old GI Joe cartoon I used to watch after school. Cobra always struck me a proxy-Nazis and I thought these guys might work in a pulp environment. 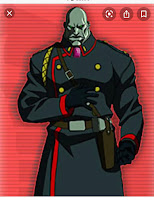 While character figures are no problem, the only proxies I can fid for Cobra troopers and from Victory Force Miniatures. But I have had no luck getting a response from them. 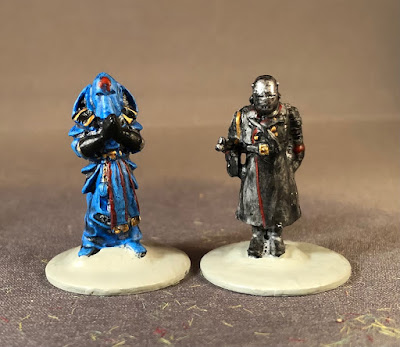 Up next: Maybe some more pulp figures.
at 5:00 AM No comments:

This week I finished a small group of 6mm Baccus Gallic foot.

I think these guys are actually Dacians but I didn't recognize that until I was well into painting them. ("Why are there no bottoms on these spear shafts...?") 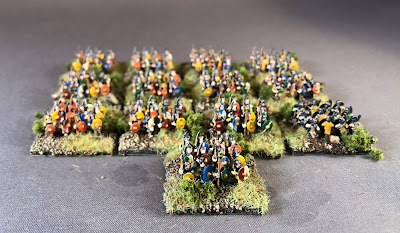 This doesn't look like much but it is 132 figures! So fiddly.

Up next: Cops and Cobra.

A few weeks back, Bruce and I wrapped up a series of modern games where we used Scharnhorst for a map game followed by gaming out the tabletop battle using Rommel (with slight WW3 tweaks). Our final game was a Soviet push (1985ish) through West Germany to run into the British. The crux of the map game was a series of bridge grabs.

Rules-wise, we reverted to the original Scharnhorst recon rules (winner picks a side and loser comes in opposite). We also reverted to a single type of shared victory objective (towns in this case). We fiddled the recon rule such that at the beginning of each day, each players roll 1d6 and adds their Recon Points. The higher roll gets the Recon Bonus, but only for that day. This tones down the effect of winning recon at the start of the game and, I think, provides some tension and balance.
The Soviets (red units) won recon and chose to enter from the top (north). At the end of Day 1, things looks like this. 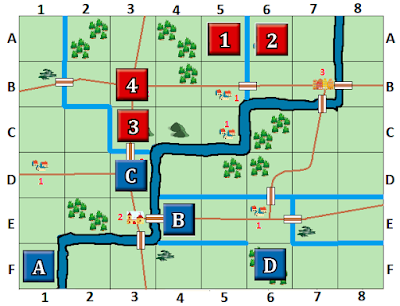 I think the British (blue units) had initiative on Day 2 and rush up the right flank to grab a three-point city and jam up the Soviets on the river. The British plan was to grab as many cities as possible and the eventual winner was determined based upon cities held plus 1d6 of points for the battle winner. 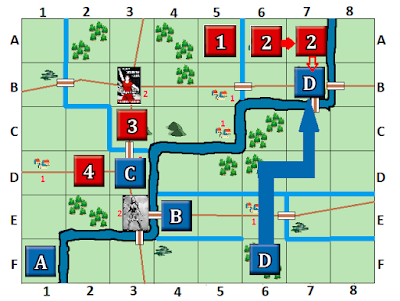 The British hoped for a fight over on the left flank and maneuvered to deny the Russians an advantageous positioning of the battle map should they get initiative on day 3. 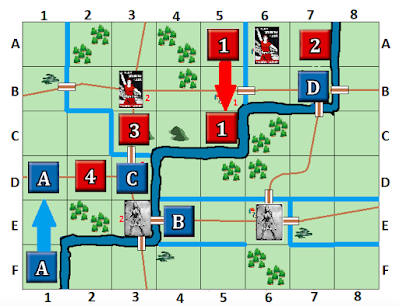 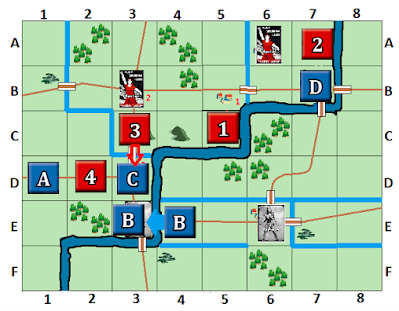 Day 3 dawns with the British having the recce advantage again and selecting the battlefield (green below). There was some last minute maneuvering to get troops on the field or to act as reinforcements. 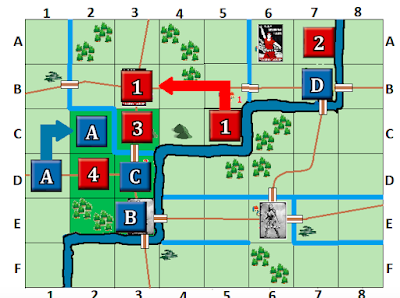 In the end, the British had the same number of units on the battlefield as the Soviets but the BAOR units were of high quality. The Russians had reinforcements that appeared a die roll. The set up and the battle plans are below--the battle self itself was a bit of mess, with troops arriving intermixed. 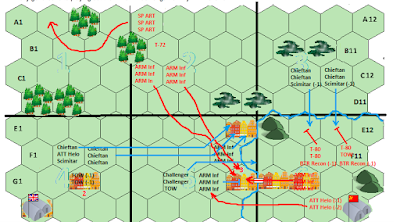 Bruce gamed this one out and sent me this AAR. The Soviet mounted infantry in sector 2 had intended to rush to the bridge and catch the British in a pincers action. Unfortunately, the British got first turn and the Chieftains used a Double Tactical move to catch the leading Soviet APCs even before they could move. The thin armour of the Soviet BTRs were no match for the British front line tanks. With the help a timely A10 Warthog strike the three companies of Russian infantry were ground down to a single strength-step each. 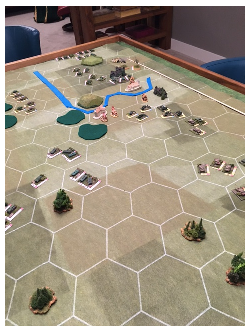 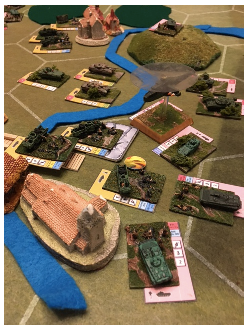 In the center (Section 5) the British infantry moved forward fast, crossed the bridge and occupied the Victory Point town. 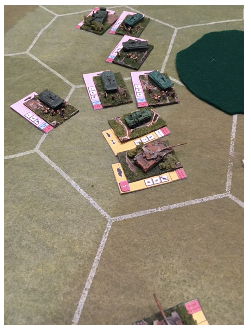 Repeated Soviet assaults wore the defenders down but NATO defensive tactical moves caused more losses on the Russian side of the ledger. 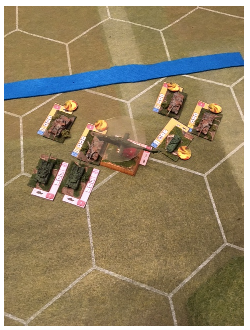 To the north (above) two attachments of Chieftain tanks, crossed the stream and “got stuck into” the Soviet T-80s. Again, the combination of British Armour and NATO airstrikes, did in the Russian armour. By turn four, the British had achieved a breakthrough and occupied the Soviet supply base 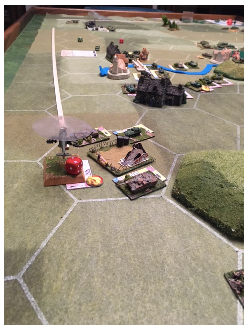 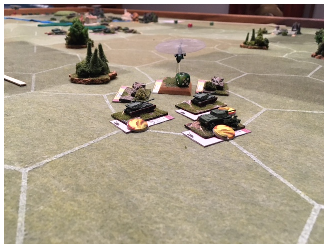 By the end of turn five the Soviet general was ready to concede. His western flank had eveperated, his assault force was worn to exhaustion and his Supply base was occupied. He decided to see if the reinforcements would arrive (a 1-in-6 chance) – and if not, he would concede. As luck would have it, they did arrive. 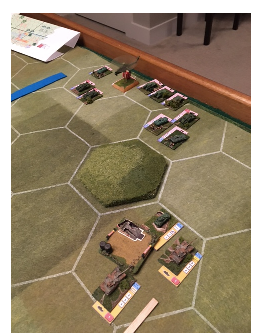 In fact the new Soviet troops got off to a roaring start. They over-ran the Russian Supply base and advanced to the bridge without much bother. 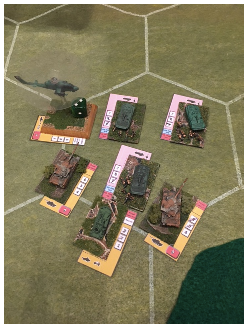 However, the British player had used to the lull to remove his worn infantry and replace it with fresh troops, re-organized his armour on either side of the town, whipped his tactical chart clean and entrenched his infantry in several locations. 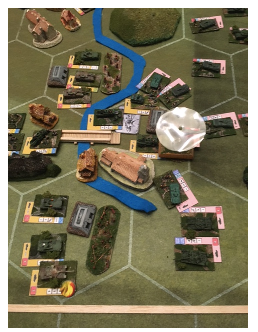 The Soviets tried to assault the town and use armour to pry open the eastern flank, but the fresh British troops and entrenchments were too much. After two such assaults, some damage had been done to the town’s entrenchments, but the Tommy infantry was hardly scratched. The Soviets had no strength left , so with the British armour and Attack Helicopter devouring his right flank, the Russian general called it a day.
We didn't roll victory points for the British win because the Brits were already way ahead in town points. Some fortunate map play by the British really put the Soviets in a difficult tabletop position. 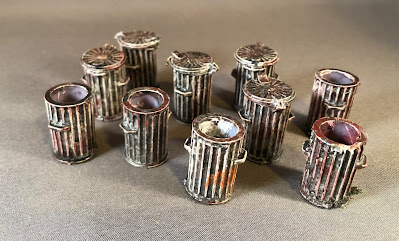 They fit in pretty well with the 28mm and 32mm figure son the flanks. They are jumbo, 70-litre cans for the 25mm figure in the middle.

Since Terry appears congenitally unable to avoid a pun, I thought I would also post up some thematically similar figures I got for Christmas. 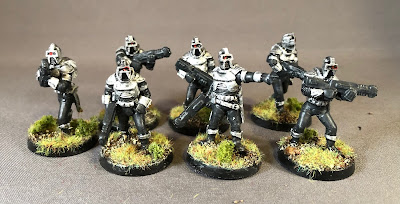 These are Argonauts from Crooked Dice. They come with these Cylon heads or a futuristic Greek head. 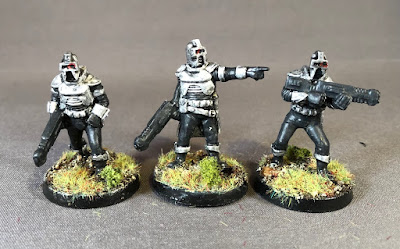 I see in the photos that I was sloppy with the red so will go back (sigh) and tidy that up. I actually tried to purchase these several years ago from a different company to no avail. I was happy to see these available some where more reputable. I am also hopeful that the matching Colonial figures will appear someday soon.

These fit in with 25 to 32mm figures pretty well.