Continuing along with some tree rehab, these were a set of plastic orchard trees that also came in box of stuff I was to use or disperse. 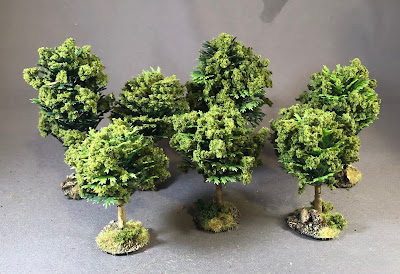 These were one-colour green plastic trees. Maybe dollar store, maybe expensive GW--who knows? I painted the trunk, applied some flock (poorly) and glued them to washers and textured. (No idea why this text is suddenly centred?) 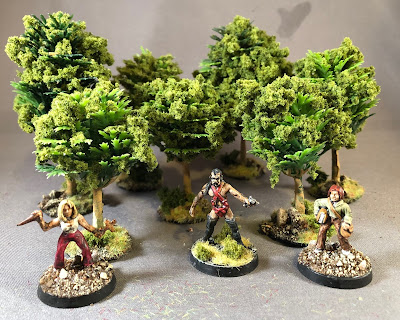 Overall, they look okay. They could use some more flocking to cover up some of the green fronds. I give them one in chance in three of receiving additional time on the workbench.

Every year or so, a random box of gaming stuff appear on my step (someone getting out of the hobby, usually). I then sort it and pass it along to whomever seems most appropriate. 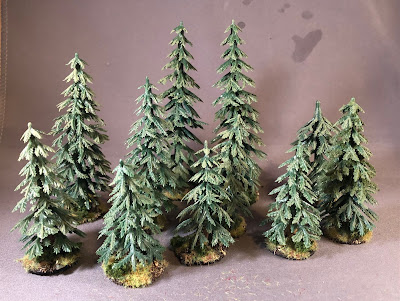 Last year, the box included a bunch of broken trees. I set them aside, thinking I would rehab them for use. And I finally got around to it.

I removed the trunks from the old bases, attached them to washers (old bases were too light to secure the trees), then textured. Then gave the trees a dry brush to tone down the glare and give them some depth. 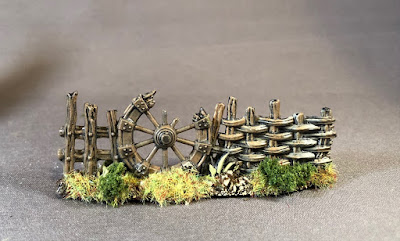 While I was going that, I also finished off this one stray piece of GW fencing that has been on my table (the rest was painted five years ago. 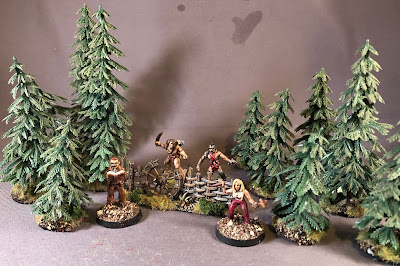 Not a bad little project. I can always use more trees and these (despite being cheap... and free!) look the part for 28s and 54s. I have some more trees (orchard style) under way. Not sure what will follow them.

I finished up a recent order or figures from Pulp Figures, including package of gangsters and some young thugs.

I like how Pulp Figures has a lot of diversity in their sculpts--with a bit of paint, it is possible to have a more diverse set of figures. Not sure why the guy below is wearing a Hawaiian shirt.

Up next: Probably some terrain I am rehabilitating.

With the end of Zombtober (probably my last since I'm out of figures), I'm back to whatever strikes my fancy. This week, it is some 28mm cops from Pulp Figures.

I did bunch of coppers last year (?). I spent some birthday cash this fall to buy some reinforcements. The only pack I didn't have was the heavy weapons group. Not sure Commissioner Gordon really needed these fellows (and the worry is always that he's use them to suppress the poor, rather than against super villains), but I had the cash, so... . 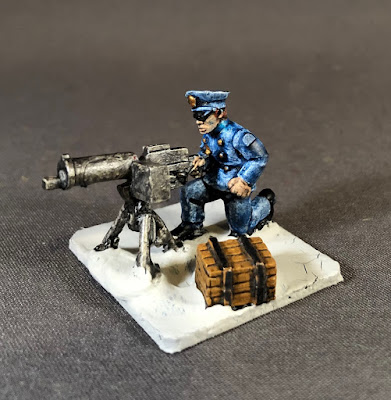 The machine gunner was a surprise. I see (suddenly, in this very picture) that he has a shoulder patch that none of the others have. So I will go back and paint that (argh). The crate is from a "clues" pack that I have underway. 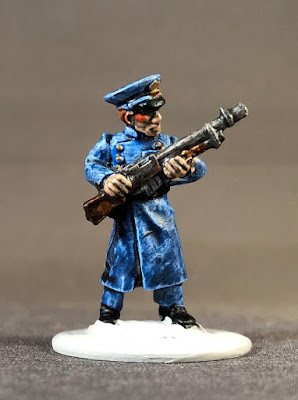 I can't tell what this guy is supposed to be holding? Just a large calibre rifle? Doesn't look like a shotty. 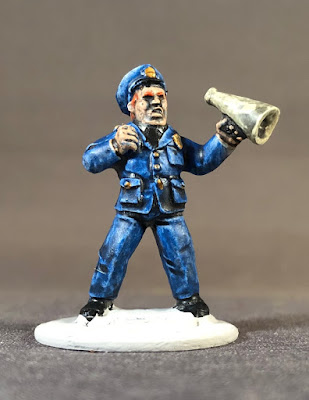 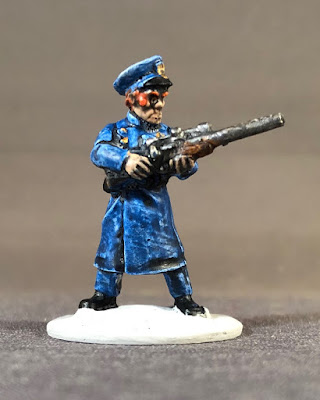 Buddy with a scoped rife. 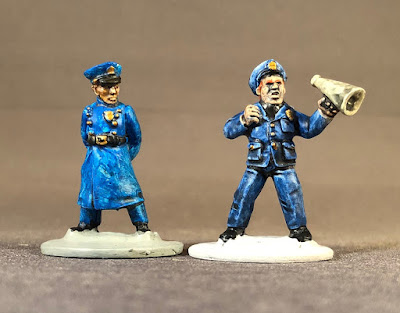 I was trying to match these to the colours I used last year. I think I was close on the blue (chose one paint pot to the right, I think). The basing is different but I have since gone back and matched the darker grey. 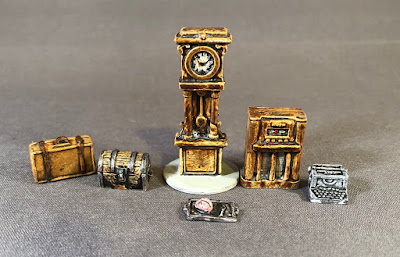 I also painted up this set of "clues". This was a fun little pack of terrain. I wonder, though, if the tray wth brains was from the Frankenstein pack instead?
Up next: Maybe some lady gangsters and youthful thugs?
at 5:00 AM 2 comments: