Basing 3mm troops is taking more time than painting the (drying time mostly), so I have also been refreshing some of my terrain. 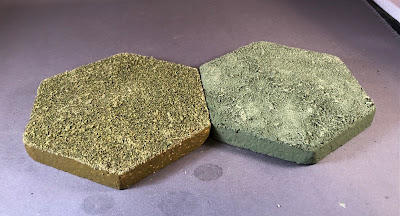 I have a bunch of old 4" GeoHex hills that I use on a playing mat that I textured a long time ago (12 years? maybe 15?). They are on the left above. I have been repainting them to match the mat and the troop bases (right). There is a slight colour shift in this image so the new paint looks a bit dustier than it is in person. 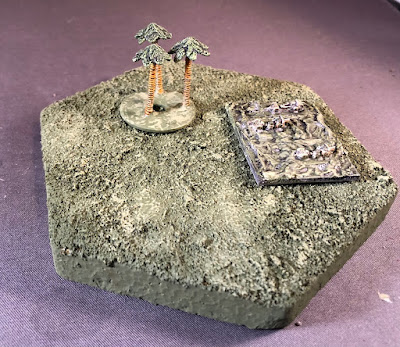 Since I'm using the same paint colours, the match to the bases is almost perfect. There are a couple of dozen hills to do so I am slowly chipping away at them. 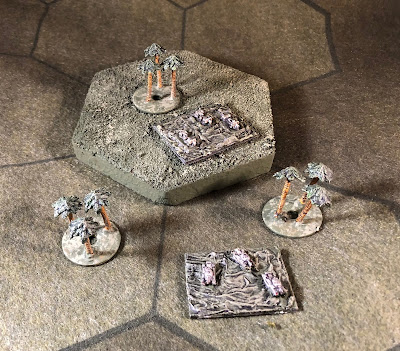 I'm also pretty happy with the match to the playing mat. This should make the hills blend in a bit better than the old ones did. 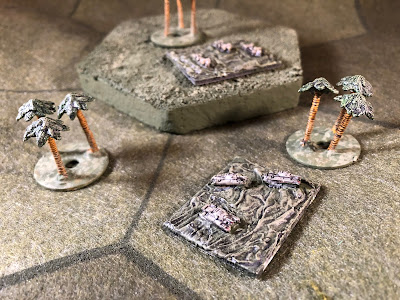 Up next: British 3mm infantry blocks plus some terrain. Then maybe some German vehicles.
at 4:00 AM 2 comments:

I finally tracked down some playing pieces from an old monopoly game at a reasonable price. The tokens are 25mm Star Trek figures.

For game tokens, they are pretty nice. I wonder if Nurse Chapel was actually supposed to be Yeoman Rand?

These fit in with the other 25mm Trek figures I have below (Monopoly Picard, Monopoly Spock, Last Unicorn orange dude, First Corp admiral.

They are noticeably smaller than the Heroclix Trek figures.

I managed a bit of painting among short vacation trips this week. I needed some objective markers so I thought these oases might be fun to try. These are 3mm palm trees and painted up well (after some farting about getting them glued down). 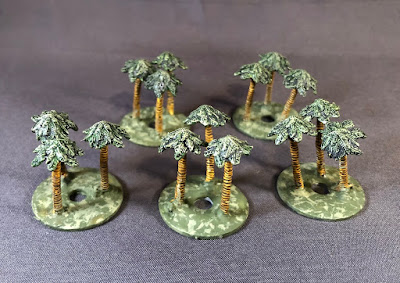 While they are listed as 3mm trees, they are really a bit more like 6mm items. For example, each trunk is thicker than the diameter of a Honey turret. Workable and all, though. 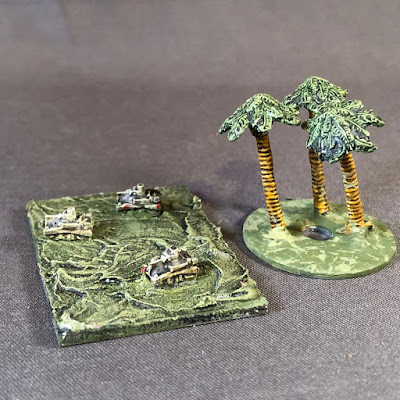 I also finished off the British vehicles I purchased. There are five bases of each type below, including Stuarts, Morris trucks, and universal carriers and A-13s, Grants, and Sherman IIs.

I also did some bases of 25 pounders. I've zoomed in to try and show off the crews (look for the helmets). 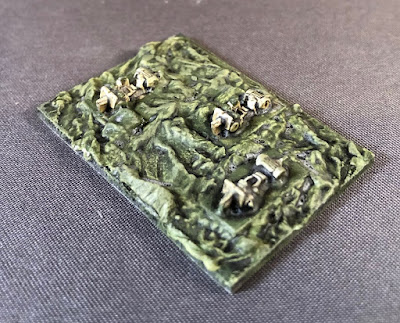 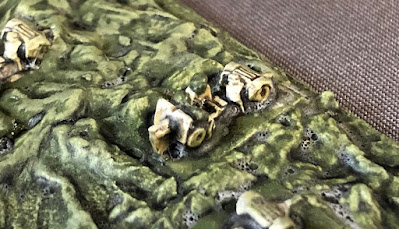 I'm on vacation this week and trying to be outdoors so only a few figures to show. First up is a mech guy Terry 3-D printed and gifted me. 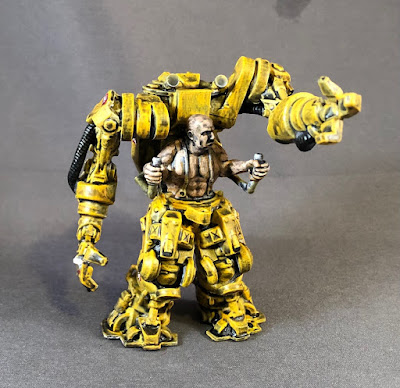 This guy is big (28mm Pulp Figure archaeologist for scale, also new). I'm not sure on the scale of the print--not quite 54mm. Probably most useful as a sci-fi terrain piece statue? 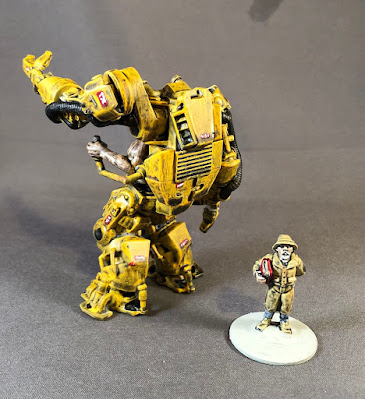 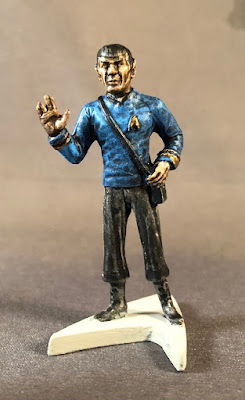 This completes my TOS crew (I also have a different Kirk and a Pike, not show). 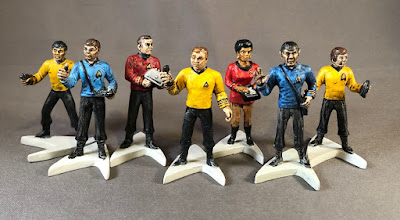 A few weeks back, Bruce very kindly donated some surplus 2mm terrain. I was very much taken with Rommel when we played it back in the autumn so I ordered some 3mm WW2 tanks. 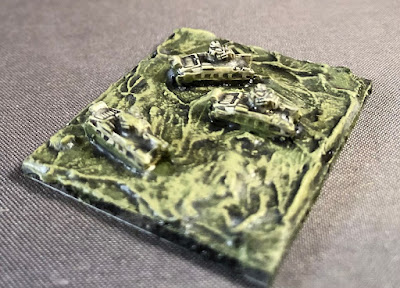 Apologies for the picture quality--it is hard to snap a shot of tanks these small. The bases are 40x30mm FoW size.

I spent a fair bit of time fiddling about with different basing techniques. These look much better in person than they do in these pictures (e.g., way less green). 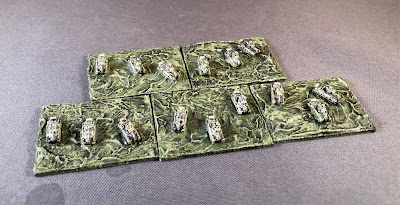 A search of pictures on the web suggested some useful techniques: mono-colour tanks with a wash to bring up detail and contrasting bases to let the tanks pop a bit. Bruce helpfully suggested wall filler as a basing compound which allowed me to put some texture on the bases.

I then ended up in a cycle of painting, drybrushing, and washing. I was trying to use pre-made colours (so I could replicate look later) but also match my existing Hotz mat (cause I'm not buying another mat!) and to be vague enough that the units could do Italy, France 1940 and the desert. 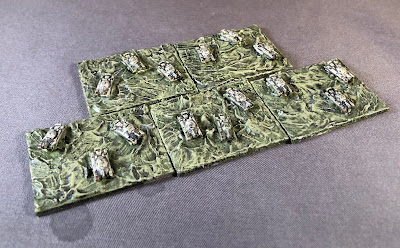 The picture below is probably the most colour-true picture and achieved the arid-olive look I was going for. The finished units will have a paper unit tag (for basic info plus hits) taped to the bottom. It has been too hot to sit in front of the computer to figure these out. 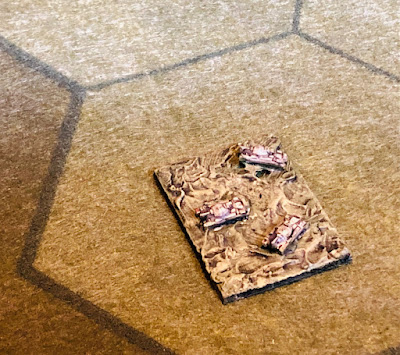 Up next: I have a ton of other units underway, including individually posed strips of foot pounders! I also have a few terrain pieces (couple of oases, some bridges, some trenches). But likely a job lot of sci-fi and pulp next.
at 4:00 AM No comments: