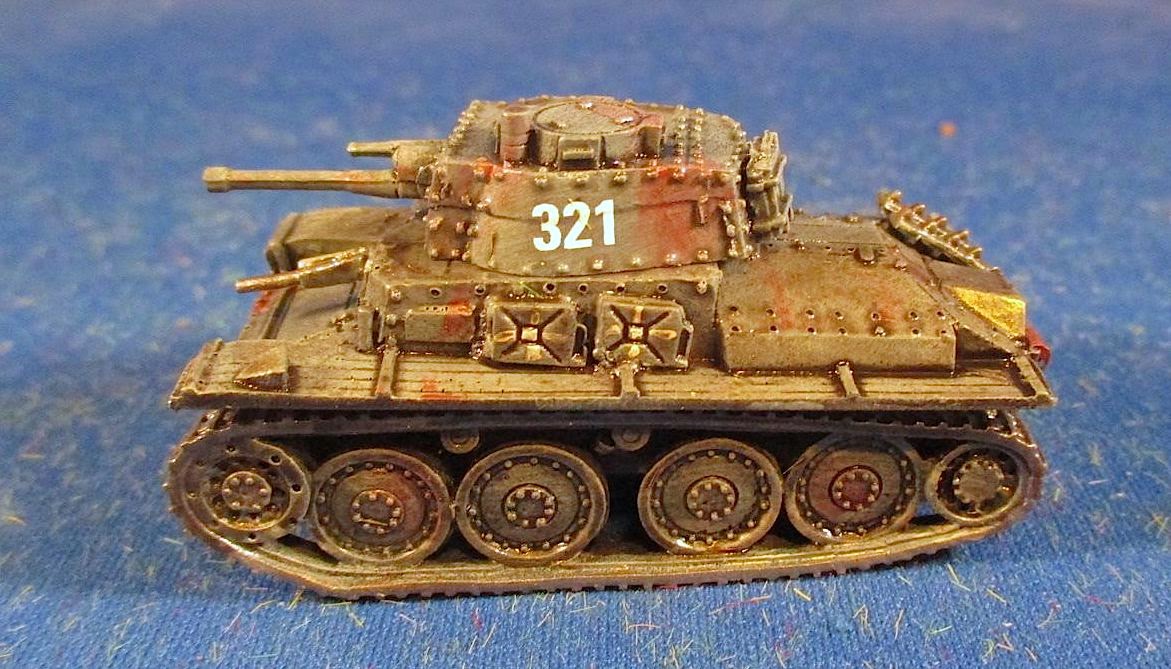 All told, these were disappointing models and I wish I had gone with the Panzer 3s. If I need more armour, I'm going to try some of the the fast-build plastics that Pegasus and Armourfast have out.
at 5:30 AM 5 comments:

Filling out the German forces for my Memoir 40 game are these five 20mm Panzer 2s from 20mm Zone. These were lovely minis to put together.

They come with a resin hull, metal treads and a one-piece turret. There was also some spare tread. I found some decals to finish them off (decals could stand to be dirtied up a bit). Everything fit with very little clean up. 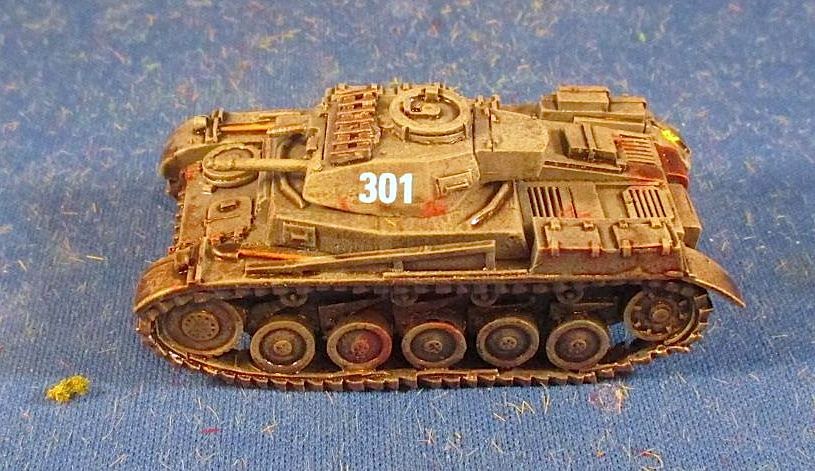 Completing a short burst of painting is this set of five 1/72-scale Germans from Zvezda. 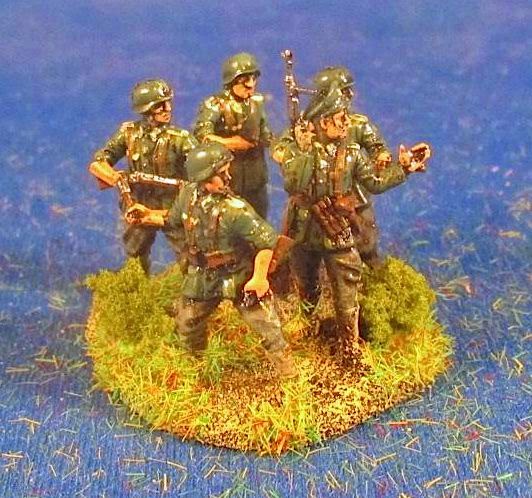 This is, I think, Zvezda's nicest kit of the lot, with four troops and an officer. I might pick up a couple more of these if I see them. I will also be using this arrangement to build a couple of units from loose troops. 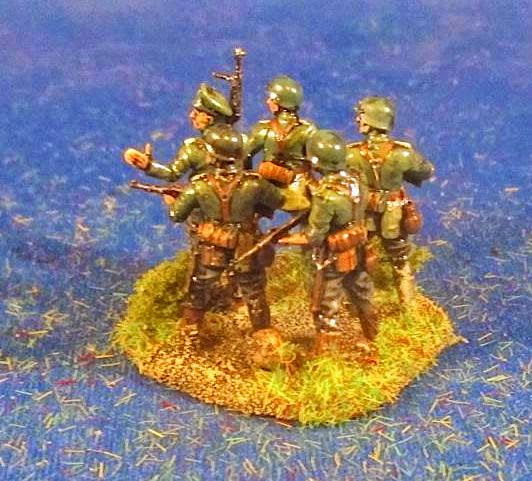 Filling out the German ranks is another MG team, again from Zvezda. 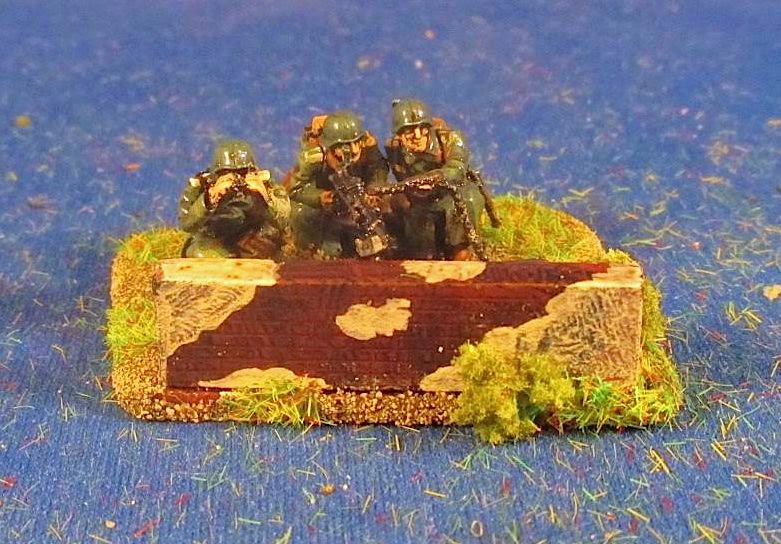 The wall looks awful in this photo (weird--looks fine in person) and everyone needs a shot of dull coat. 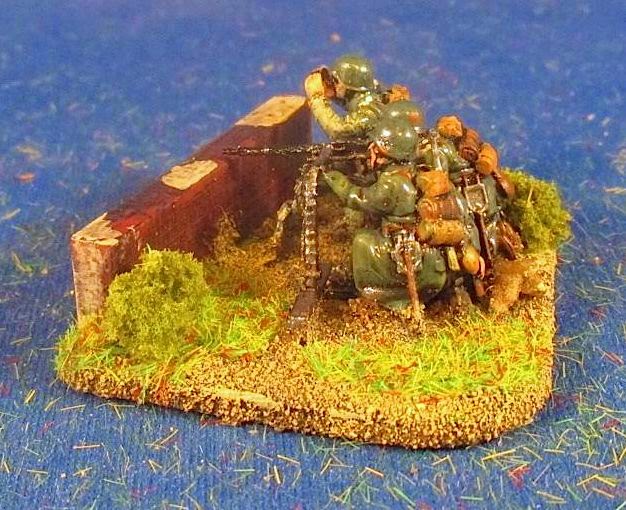 I'm quite taken with the dioramic nature of this kit. 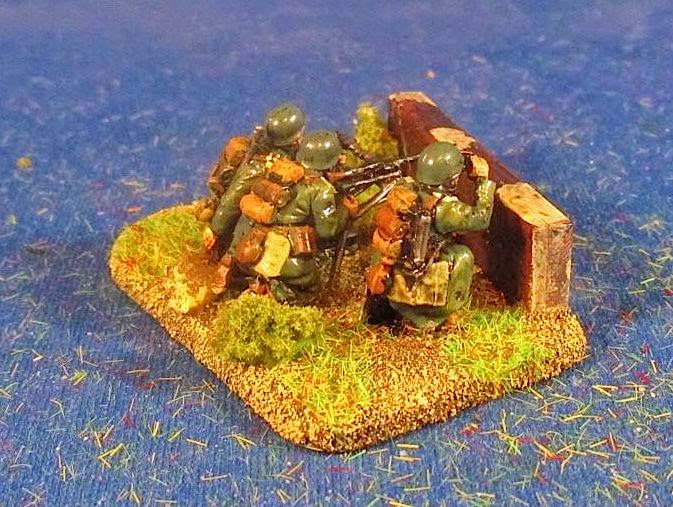 Up next: Some ground pounders

A few more 1/72-scale Zvezda troops. This unit comprises a mortar team. Alas, the loader of the active team seems to have suffered some sort of serious facial injury and has a swollen nose! 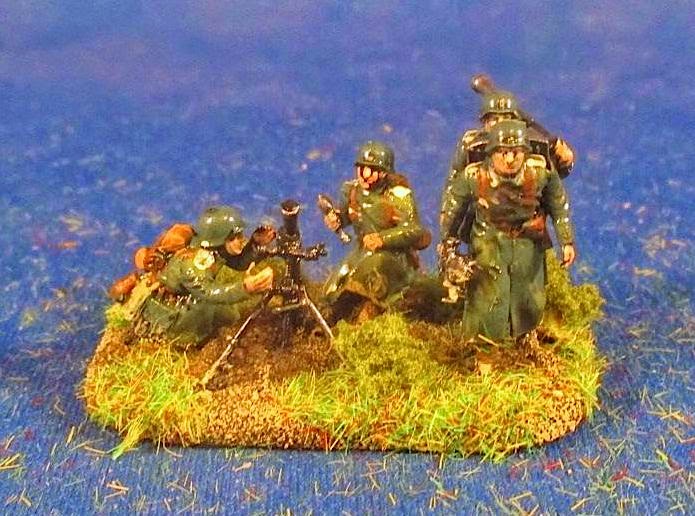 I quite like the fellows packing a mortar and the kit allows the troops to be modelled together (as here) or separately. 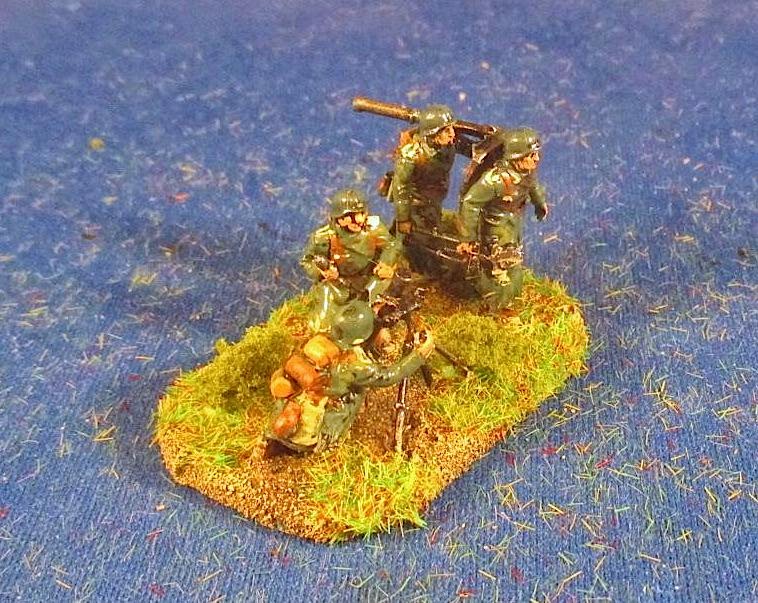 Up next: An MG team with a few tanks underway.
at 5:30 AM No comments: 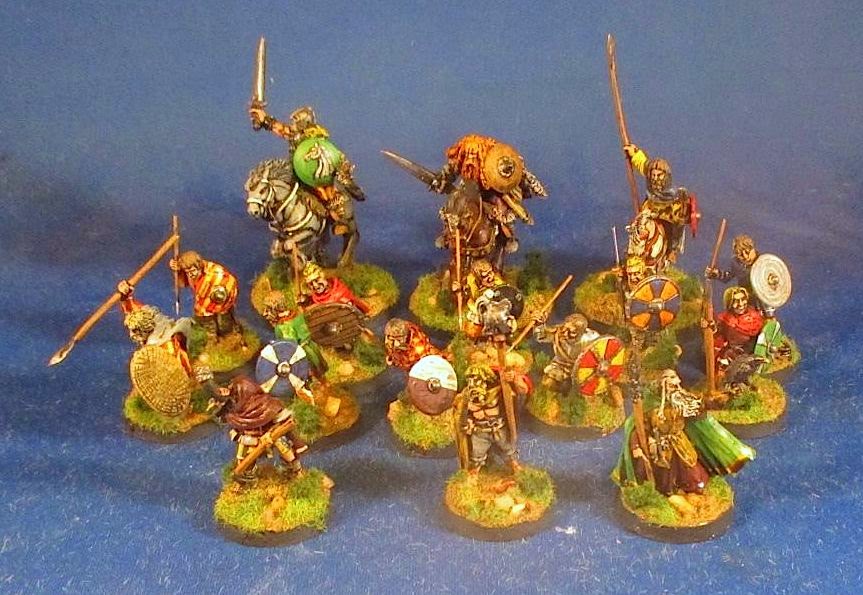 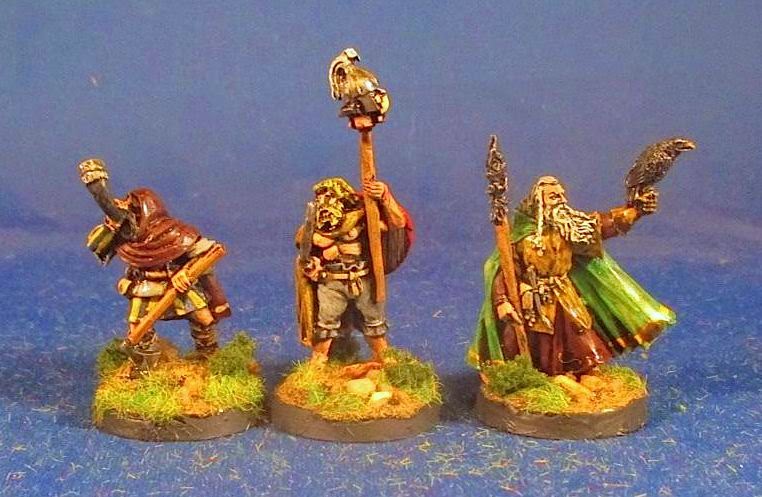 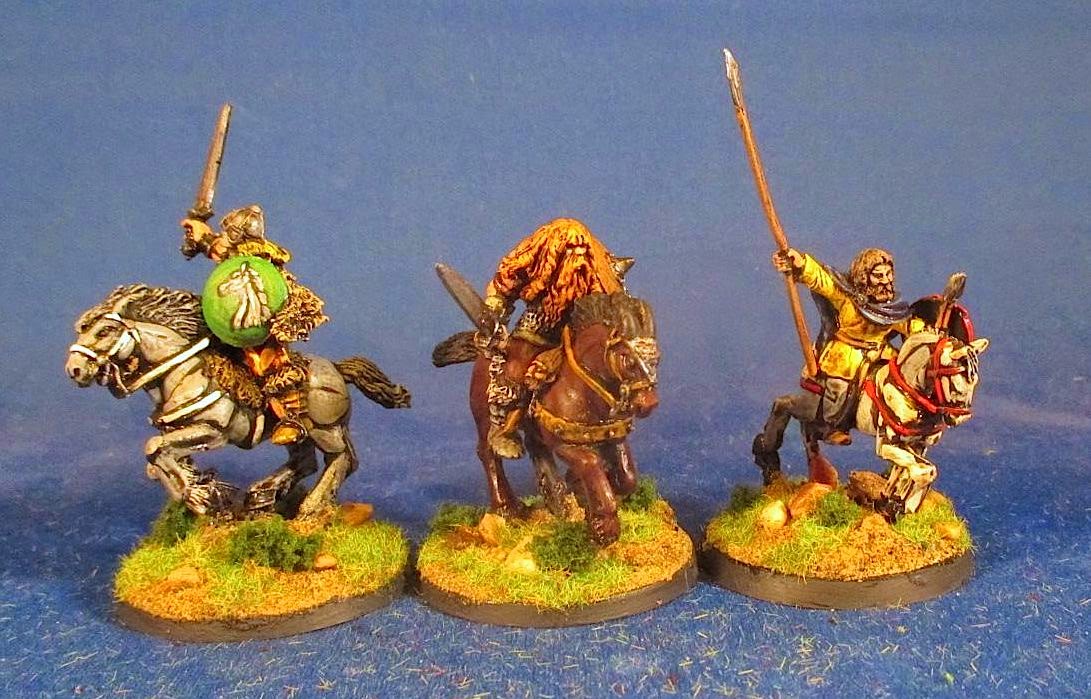 All on GW bases with static grass and flock. I believe the auction gets underway in September so Iw ill pack these guys up in bubble and hand the box off to Dave at the club on August 5.
at 9:33 AM 2 comments:

After a bit of a break from painting, I've finished off a bunch of Zvezda WW2 Germans I started bcd in June (!). These are two MG teams.

Nice enough figures. My plan was to used each base as the core of a unit in Memoir and populate the rest of the unit with single figures. 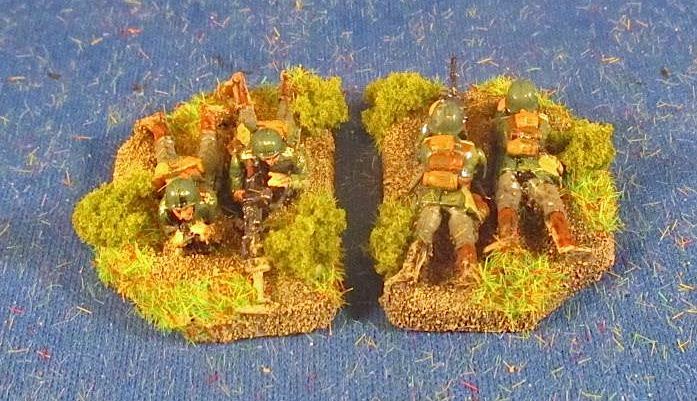 The Zvezda sculpts went together quite nicely. They need a bit of dull coat, thought! 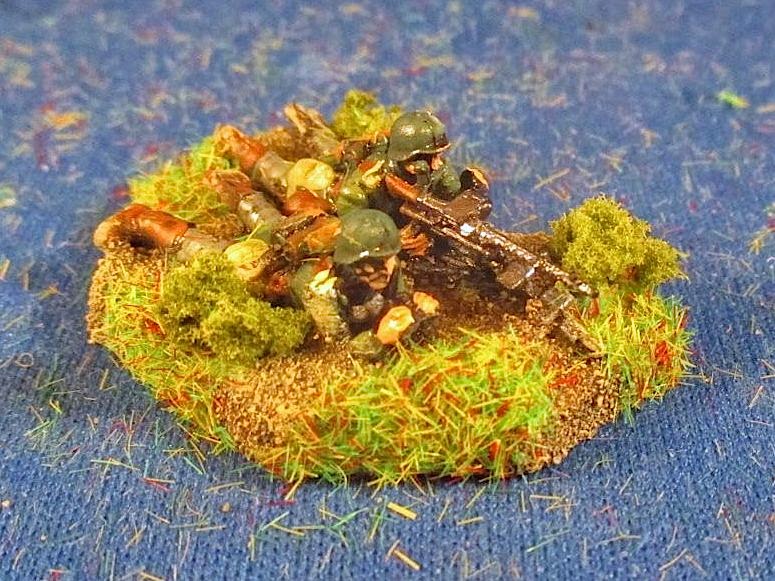 Bruce swung by this afternoon for a game of A Few Acres of Snow. This is only of my favourite wars of North America game. Card driven and you build your deck as you go.

We managed two games in about 100 minutes. The first game was a British win based upon building up large population centres (no military conflict whatsoever). It was, however, a damned close game (1 point, I think--I was surprised how close it was).

The second game we had conflict. You can see the British assaulting Louisburg below (on the far left_ and totally hosing the French players' card sequencing. This assault was eventually repelled.

The British again ended the game with a population build. Yet this was a strong French win, perhaps because of the British military dalliance allowed a couple of extra moves for the French to build an edge? I dunno--I never feel I know what I'm doing in this game and that is quite enjoyable.

I keep reading this game is broken (using the Halifax Hammer technique) but I've never seen that in play and much of the tension is actually about hand management and the sequence the cards come up in (that Bruce is also playing is often lost on me).  Up next are some 1/72-scale WW2 troops I have finally finished.
at 3:12 PM 2 comments:

With my vacation underway, Bruce popped over for an afternoon of gaming. I pulled out Commands and Colors Napoleonics and we played the Corunna scenario. This was a historic British victory in a fighting retreat. The French have it tough attacking across fordable streams into hills and towns. 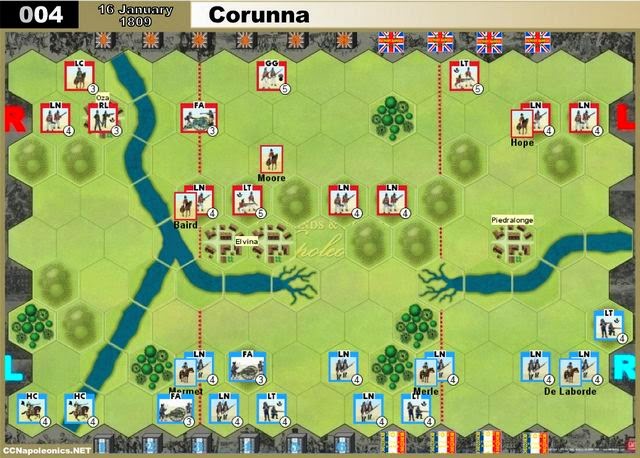 Game one saw the French rush cavalry up the British right flank, crush it and then start to romp on behind the British lines (ack!). 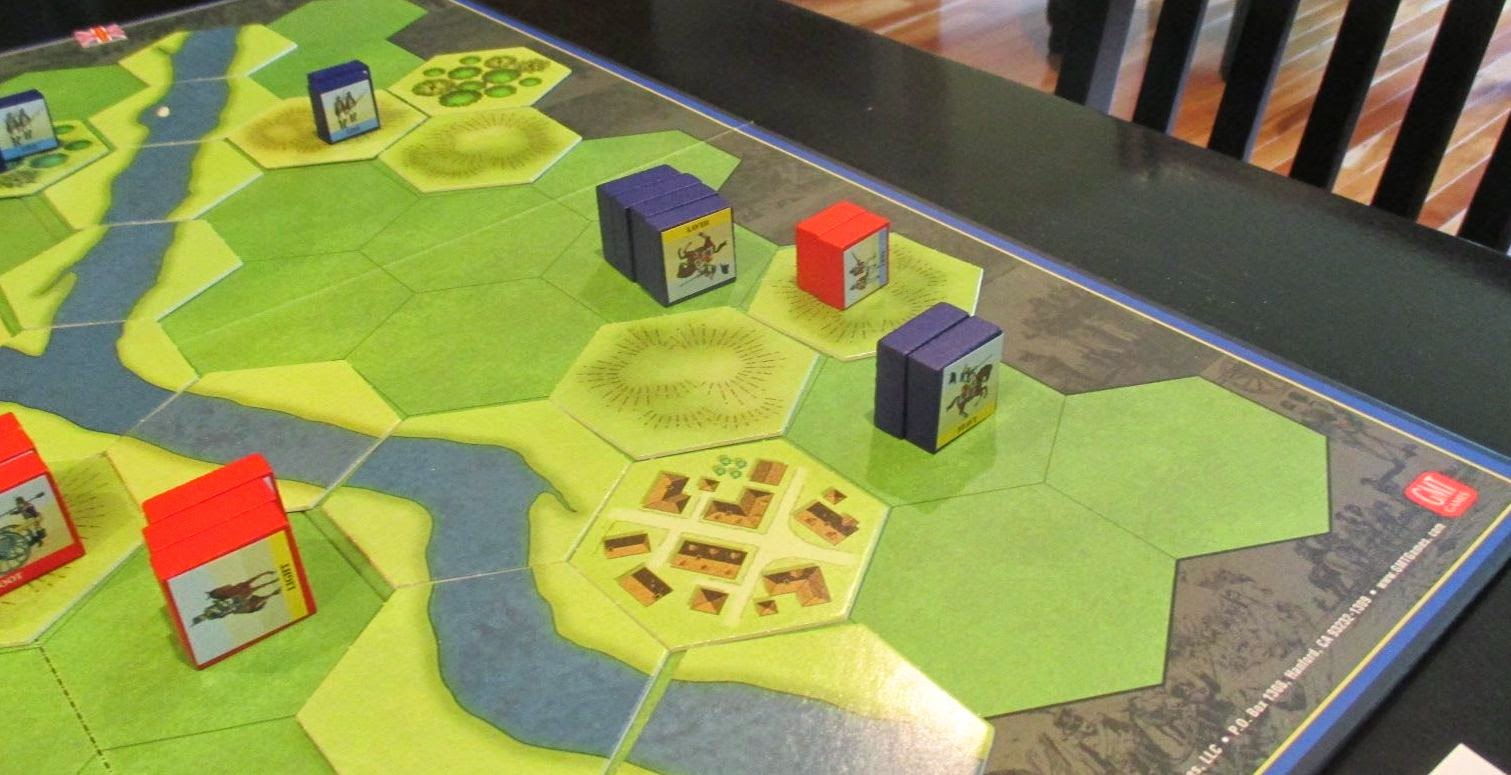 But the british managed to hold off a frontal assault as well as hole up in a town on the river, thereby stalling a French attack on the left. Eventually, the French just ran out of gas and were forced into a gallant cavalry charge up a hill against guns and it was a tight 6-5 British win.

Game 2 developed differently with the French threatening the British right flank but making steady progress on the British left (including drifting part of the centre that way). Lousy British cards plus some dumb-ass luck saw a decisive French win (I don't recall the score but it was lopsided).

Bruce then kindly subjected himself to a game of Risk(!). This is variant from a couple of years back that I got on sale and is designed for two players (Balance of Power is the subtitle). Basically there are objectives and a neutral third power to break-up the usual Risk-for-two slogfest. 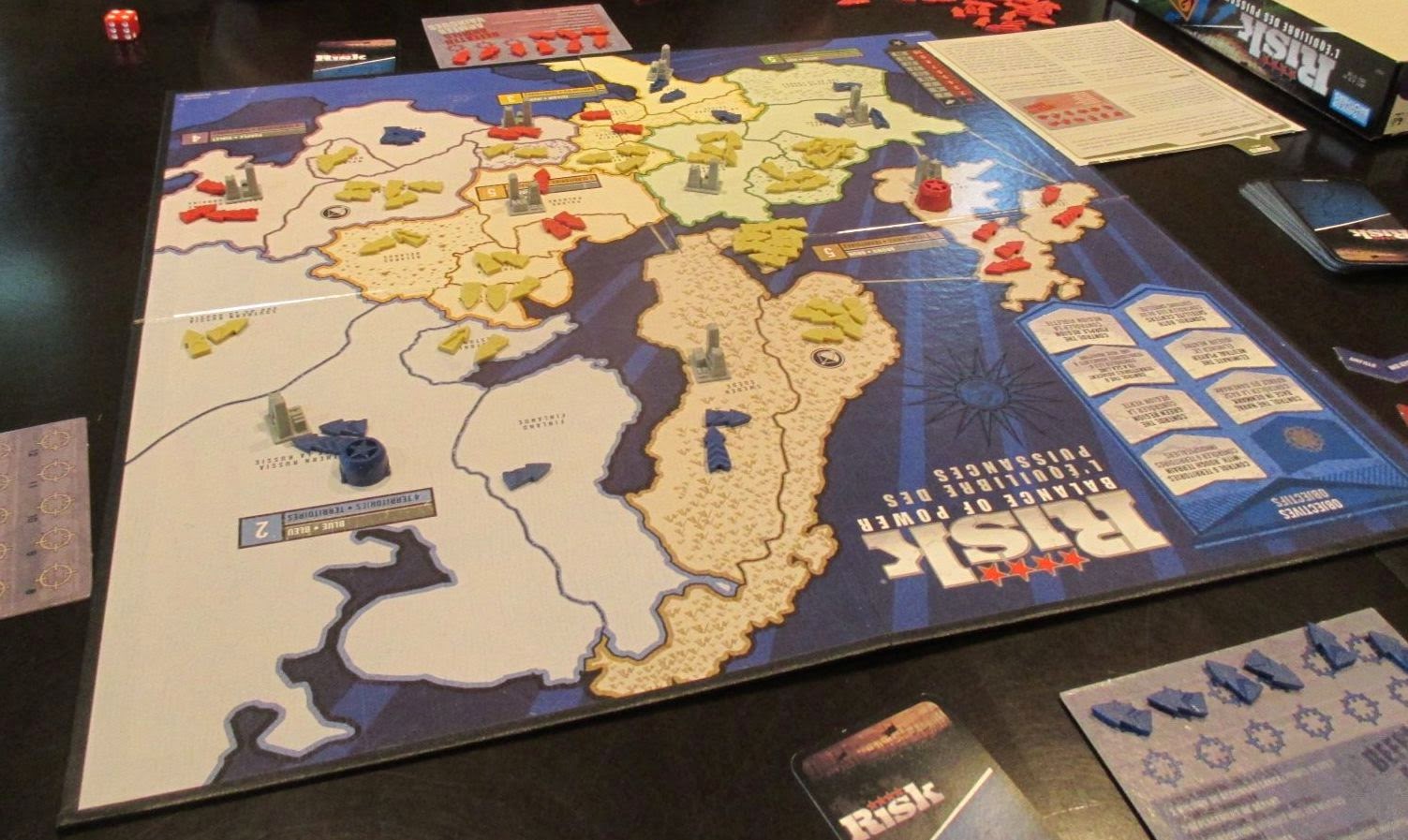 Some rules issues aside (doesn't say how you win, for example...), there are some nice ideas wrapped up in the usual Risk rules that advantages the attacker. Not sure I'd bother with this again unless Jessica wants to try it. The pieces are hard to pick up (despite lots of handling to drive some of the command mechanics) and the overall narrative of the the war (set in modern times) doesn't make a whole lot of sense. Tough to make a good variant when you are stuck with a game engine from the 1950s.

We had an astounding 15 gamers out at he club last night, despite the heat. Dave and Scott had a Byzantines versus Normans smack down using Saga. 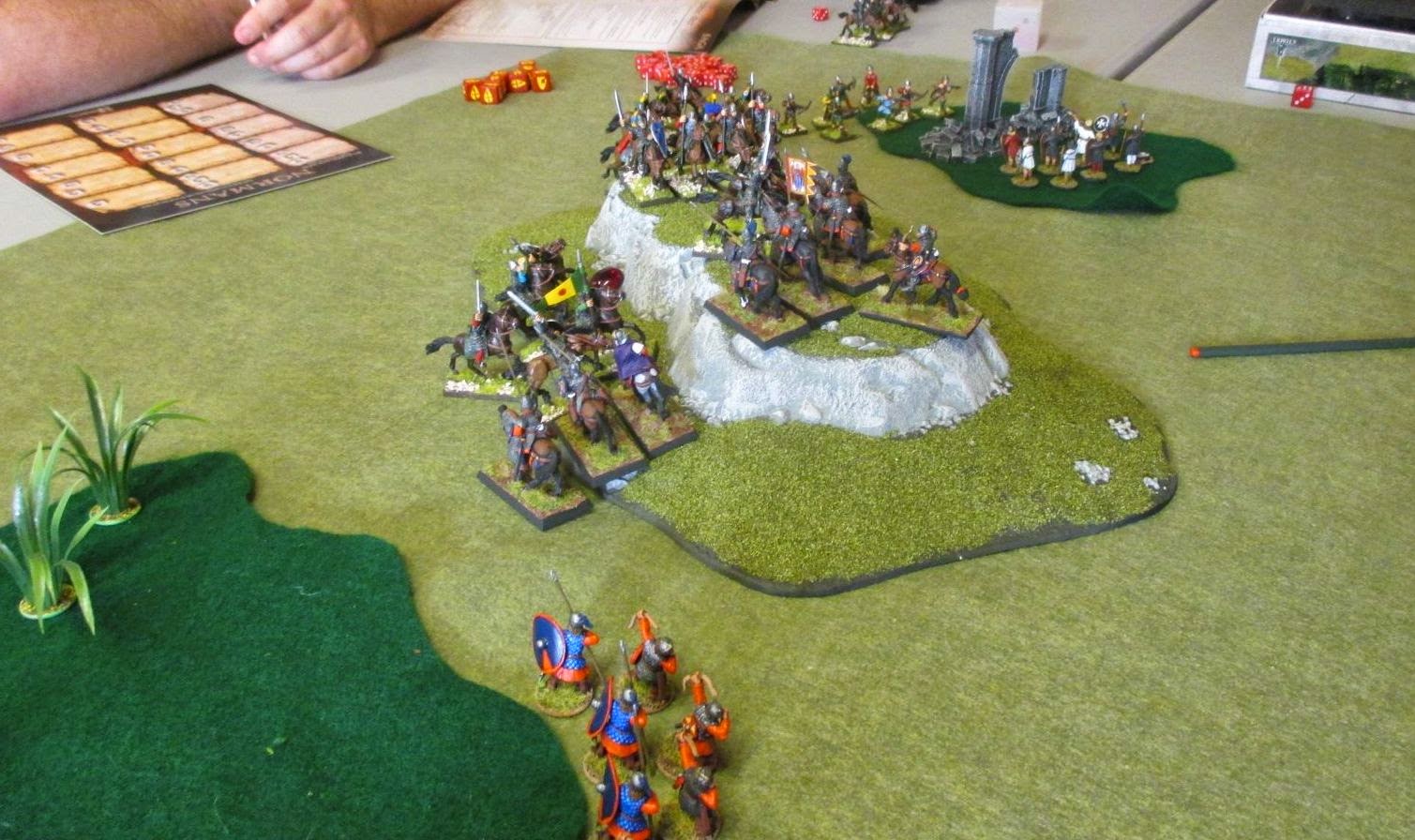 There were four Warmachine players. 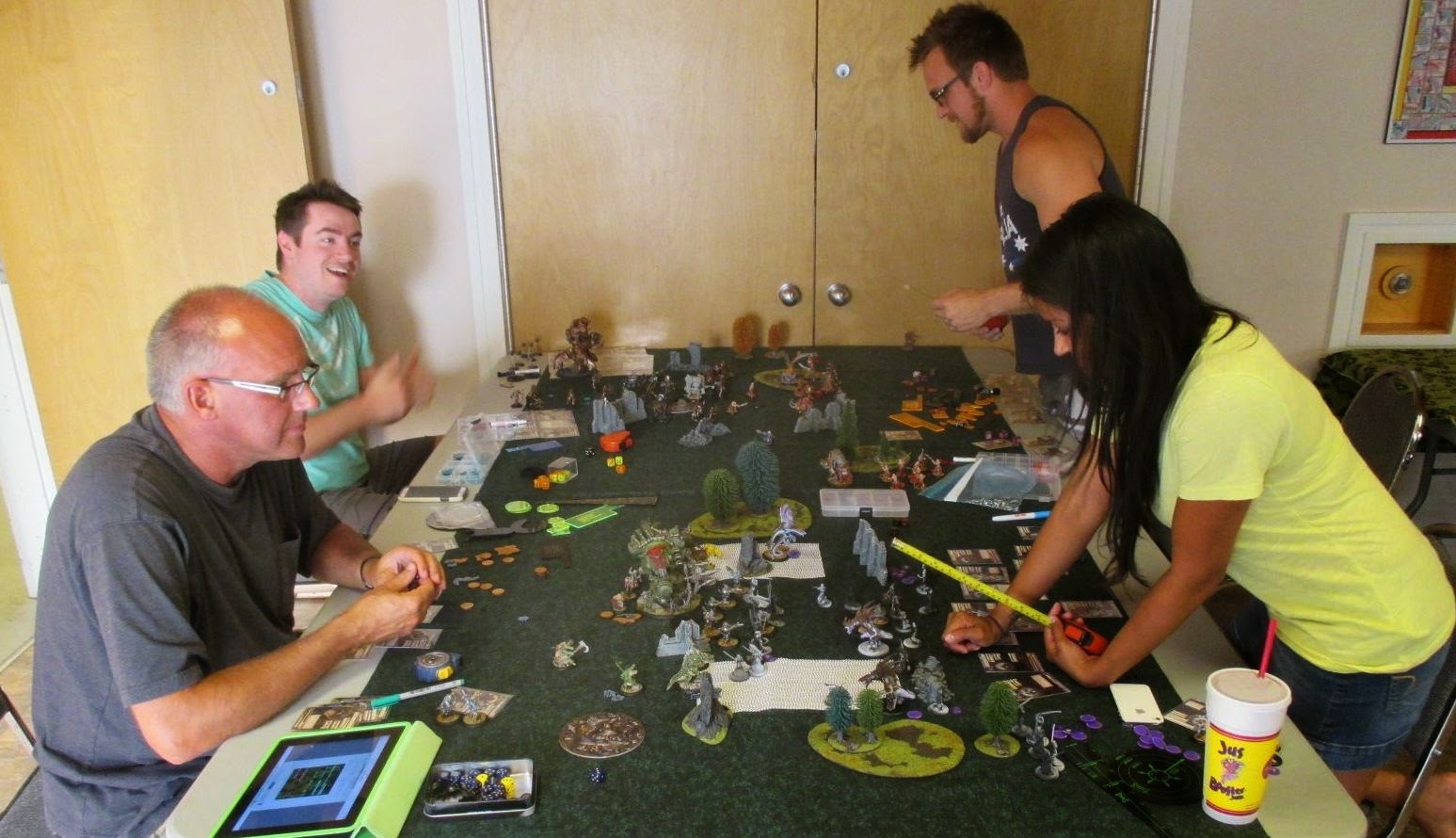 And Terry hosted everyone else in two games of Zombicide. 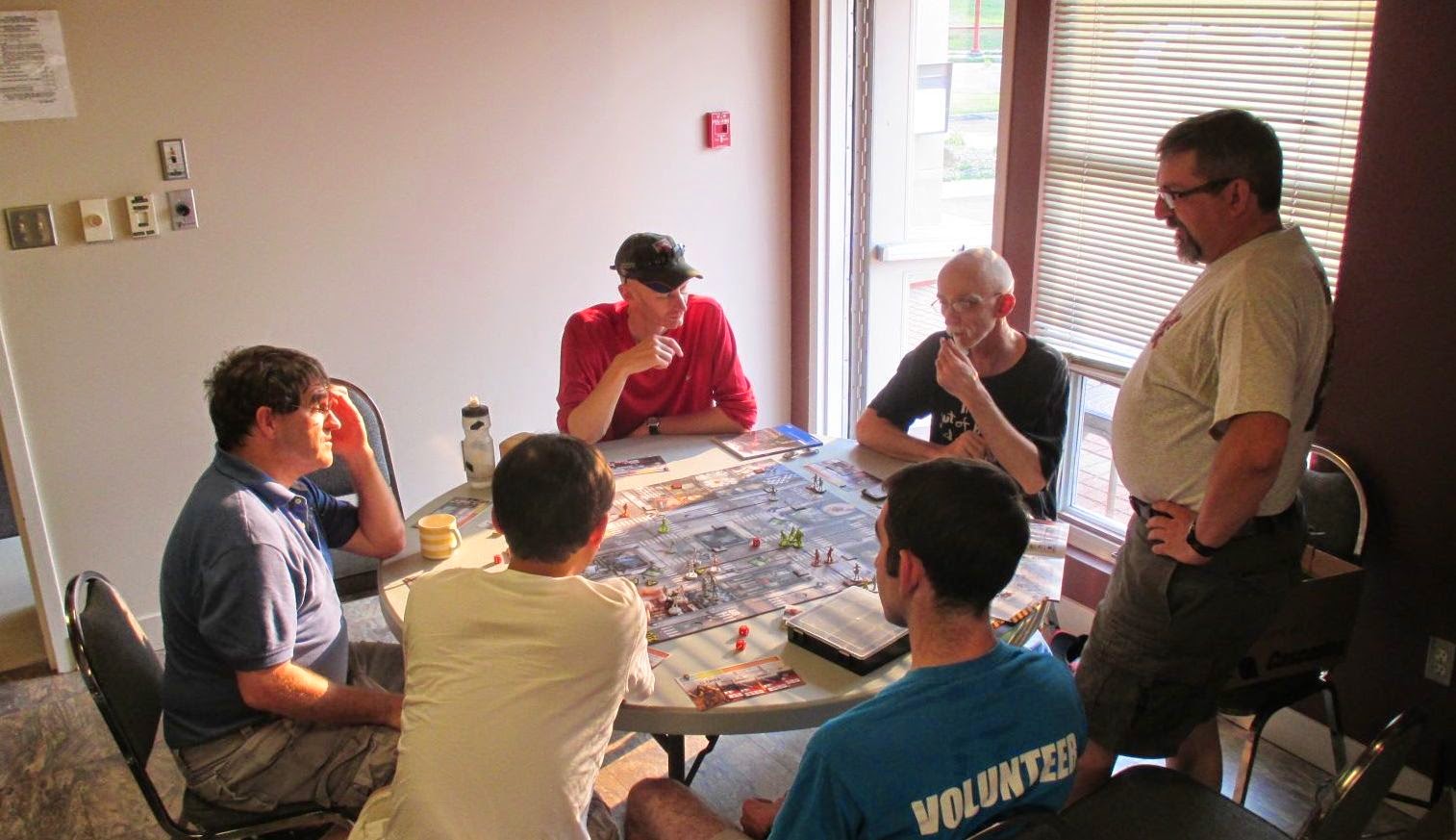 Our next club night is tUesday August 5. Assuming the heat breaks, I will get back to some 1/72 painting shortly.
at 6:25 AM 2 comments: