Grab bag of Big Trek and small Game of Thrones

Okay, so this week is a bit of a job lot of painting. First up is a 90mm Sisko from DS9. This is maybe the largest figure I've ever painted. 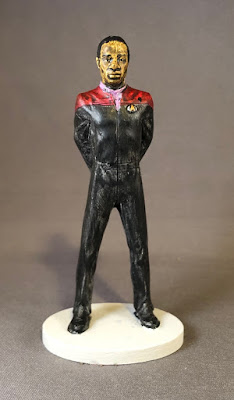 For scale, a 54mm Picard and 25mm Imperial Guard. Got this in a job lot; no idea what to do with it (initiative marker? "Who has the Sisko?"). 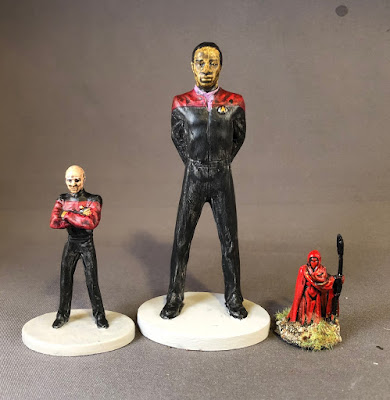 I also cleared off a few 15mm Battlelore Westeros figures. Two cavalry here (I think these are characters) plus three assorted foot. 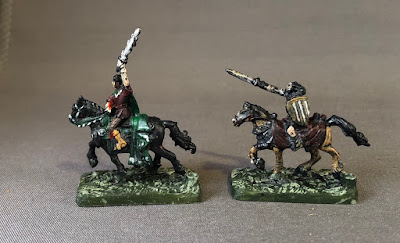 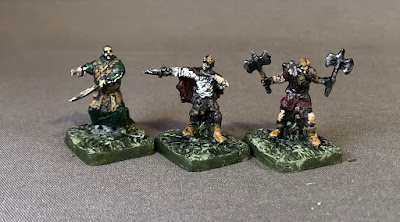 And then some 54mm trek A few STTOS crew: Chekov, Kirk and McCoy. 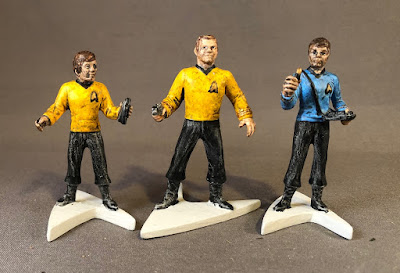 And then a STTNG Klingon with pain stick. 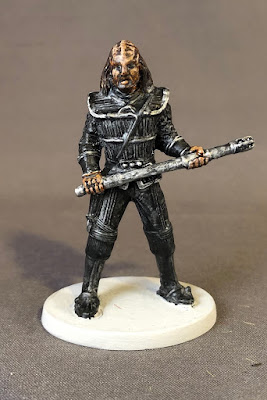 Up next: I think some 54mm AWI and then some more sci-fi.

Continuing my tour through sci-fi Monopoly figures, this week I painted up some figures from the Clone Wars monopoly variant. I haven't watched this TV show but the figures seem to be faithful enough to the cartoon. 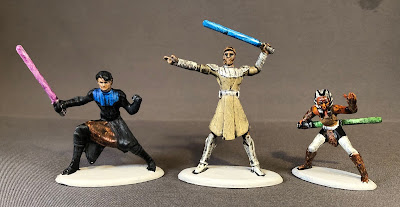 There are six figures in this set (four Jedi and two Sith). On top, we have Anakin, Obi-Wan and Ashoka. Below we have General Grievous, Captain Rex, and Ventress. These metal figures are pretty cartoonish, with elongated limbs and minimal detail. 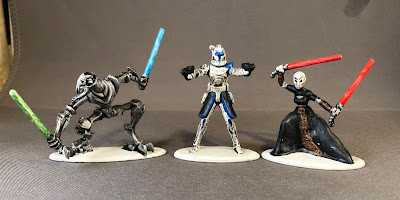 The figures are huge. I've compared the two Grievouses I have (right from the Saga Monopoly game) and the Clone Wars figure is about a third bigger (based on limb lengths). 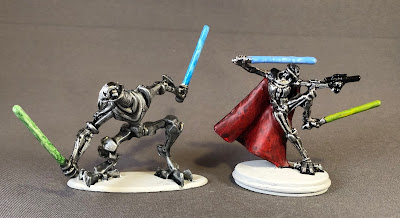 Below, I have compared the various Jedi I have: left to right we have West End Games 25mm Kenobi, Clone Wars Monopoly Kenobi, Rawcliffe 42mm Qui gon Jinn, and 32mm Saga Monopoly Kenobi.

Overall a fun paint but of little utility for gaming so likely these will end up for sale.
at 5:00 AM No comments:

Last of the Zeds

I promise these are the last of the Zeds for awhile. These are the guards from the Prison Break expansion of Zombicide. 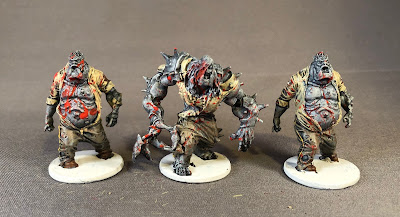 I always have my eye out for interesting board gaming pieces. These figures are from the STTNG Monopoly game and are roughly 25/28mm figures. 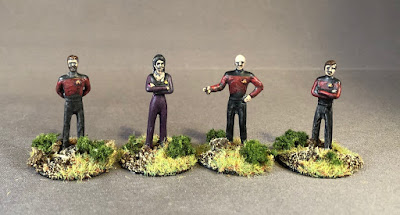 The figures look a bit like the 54mm Rawcliffe pewter sculpts but are different. They are also quite slight (more of a 20mm plastic vibe). I've no idea what Worf is doing (below): the Monster Mash? 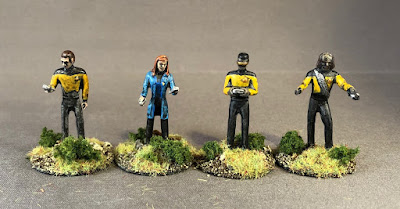 There were also four other figures (O'Brien, Pulaski, Yar and Guinan) that you could mail order, but I have only seen them once on eBay for a huge price!

I put them up against some other Star Trek figures I have for size comparison. Left to right we have a Victory Force Miniatures Space Crew (TMP Klingon variant, painted as a TOS Romulan), a Space Vixen's from Mars STTNG Klingon,  a STTNG Monopoly pieces, a Matakishi's TOS Star Ship Crew and a 1st Corp TOS Ships Crew.

Up next: More bleeding Zombies!