I dropped over to Bruce's last night for a game of Maurice--our first (I think) since we got the full rule and card sets. Bruce cooked up a fictional FIW game, with himself as the French (background) and me as the British (foreground). There was a lot of terrain with the focus being a meadow in front of a small village. 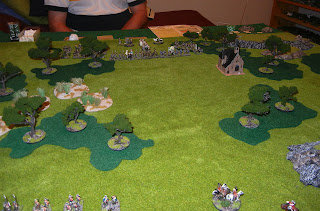 The French deployed to cover the meadow and placed four units of Indians behind the woods on the left of the picture. I presume the idea was to pin me with the troops and cannon and then enfilade and rout me with the indians. This was quite an alarming set up and there was just no room to form much of a line. 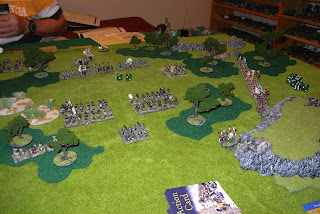 I deployed my dodgy conscripts and cannon in the meadow, with my sole unit of indians covering my left flank. The three units of good troops (including an elite group and two notables), I then ran as a column up the right side of the field, trying to turn his line. I had a card that allowed me one move through woods without penalty, which was a big advantage--maybe the first time I have ever used this to modify a march. 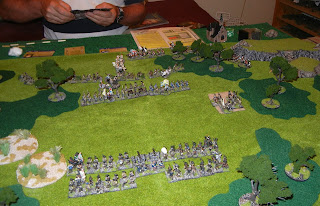 I eventually managed to get beside and behind Bruce (bagging his camp--a clutch of goats). Strategically a good play. Tactically, there was some room for improvement as my guys were not optimally positions to form line and sweep forward. I might have been better to move through the woods in column. 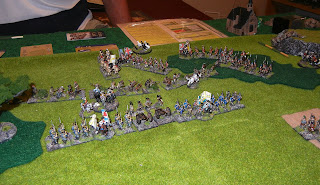 Eventually I got it together and moved against his rear area. Bruce redeployed some indians but they got caught in column. He also moved forward his main troops in the meadow into my guns--needing to break my army before his fell apart. I lost a unit but he lost two in the ensuing rumble. 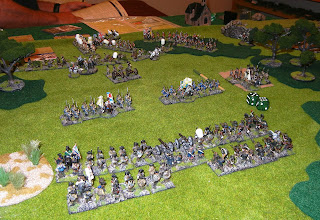 I finally managed to pick off a unit of indians and win the game. This was the first game of Maurice where I felt like I had a plan and I won because it was a good plan (I win a fair bit because of dumb luck!). Overall, a good game with lots of shooting (almost no melee).

Also a short game--I never had to pause to refresh my hand. This reflects the small armies, reliance on shooting, parsimonious card play and some bad rolls by Bruce on the morale table. At the moment I won, I was down to two cards and would have had to take a breather soon to get some more cards. That might have given Bruce the time he needed to redeploy and pull off a win. 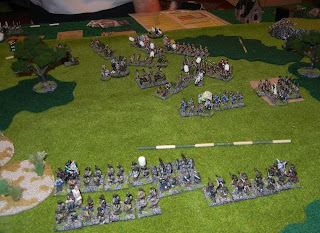 Up next: Some 10mm AWI are underway, with flesh, coats and hats blocked in. Now onto pants and the endless straps and cuffs and turnbacks! Perhaps I will get enough time to finish these this weekend--depends on the kids' soccer schedule and the weather.
at 6:58 AM 2 comments: 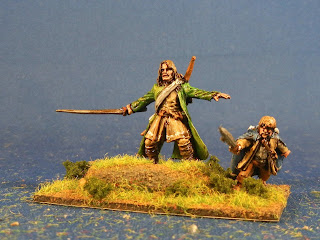 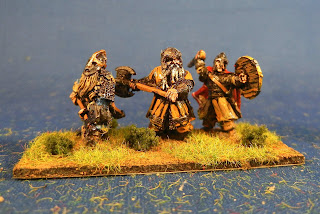 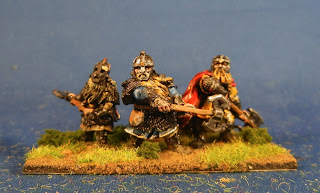 Up next: I have (oh happy day) a game with Bruce Tuesday night (FIW Maurice). THis is my first chance to roll dice since MayDay and I'm excited. I also have 112 10mm AWI guys on paint sticks, primed with the flesh done. Maryland troops, I think. Then maybe a few more LotR HoTT bases.
at 3:55 PM 3 comments:

Last year I painted up a goodly number of 10mm AWI for a commission. Some reinforcements arrived awhile back and I'm starting to work my way through the bags. 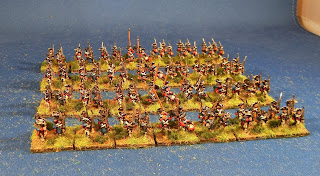 First up are some New York troops for the rebels. You can see them above doing von Stubben's classic Fotoppen maneuver. Four units, seven bases each, four figures per base for 112 bodies. 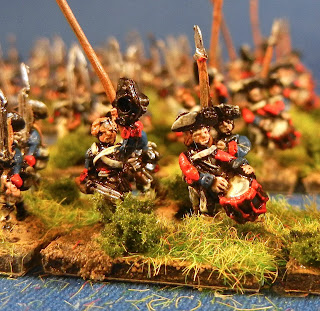 These were described to me as more regular troops so I mostly did them in white pants and blue jackets with red cuffs. There were a couple that got odd-coloured trousers or gaiters or hats to make them look a bit rough and ready. Nothing as nerve-wracking an seeing your painting viewed at 250% real size.

I get into a bit of a zone when I paint and I caught myself painting a "sniper scope" on a musket (a piece of flash, it turned out) but only after I'd gone on to do several more muskets and noticed that it was only on that one figure. I doubt it would have helped him given the lack of rifling anyhow. 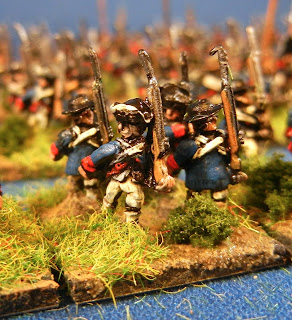 Up next: I have some 28mm dwarves under way for a LotR HoTT army. I will also mount up another bunch of 10mm AWI guys to primer and paint. These fellows will be a bit more eclectic in their dress.
at 11:51 AM 4 comments:

Work took me to the centre of the universe earlier this week and I spent my few free hours hoofing it to Fort York. Along the way I ran into these guys and now I'm considering a new scale... . To my amusement, these guys even have mold lines! 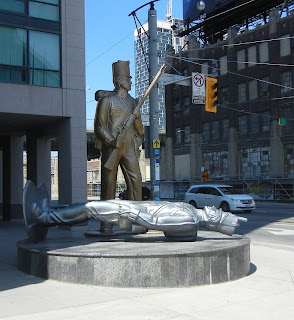 Fort York was burned in 1812 (or 1813 maybe?) so these are rebuilt buildings, although many are original periods ones and some were in use into the 1930s as housing. Below you can see one of the guns pointing at the freeway built on the infill which has pushed the lakeshore back out about 500m. 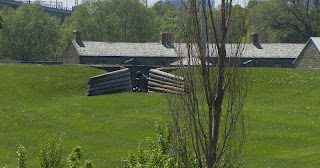 I only had an hour to wander before it closed but that was a good amount of time. I saw the officer quarters (brick building on left below) but the best part was the white block house in the distance (to the right of the CN Tower). Great displays of uniforms, fire arms, cannon, maps and interactive bits. I resisted the temptations of the gift shop. I recall taking a sword on an airplane carry on in the 1980s (gotta love the north!)--I expect those days are long gone! 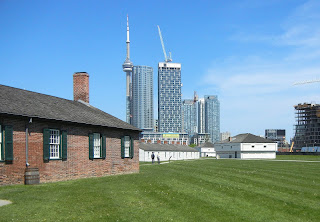 The rest was a fine enough walk (my first Canadian battlefield, unless you count Frenchman's Butte) and there was interesting stone work and cannon. Being in the middle of a city is a bit jarring, though. 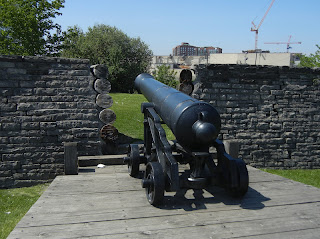 Up next: Back to my 10mm AWI commission this weekend (will finish the first batch by Monday). Then perhaps a few LotR guys before back to the AWI commission. I also hope to get a game in shortly as I've missed most of my usual May gaming.
at 6:31 PM 7 comments: 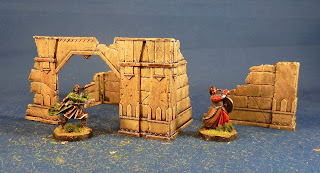 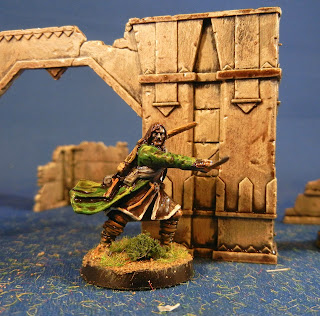 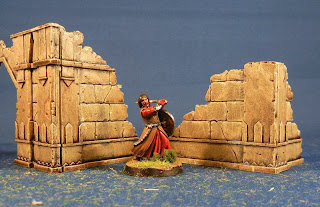 Up next: I have a quick trip for work so I hope to snap some pictures of Fort York (I have about three hours to kill in downtown Toronto tomorrow afternoon). Then back at these AWI fellows (gun stocks and hair are next, then gunmetal and bayonets) plus perhaps a stab at a few LotR figures. Alas, I will miss the club on Tuesday night. But I hope that is the last of the spring interruptions in gaming.
at 10:55 AM 2 comments:

With nice weather, it has been hard to sit down to paint these past few weeks. But I'm getting a second wind and today managed to finish up some 28mm renaissance figures for my growing (and soon to be for sale) HoTT armies. 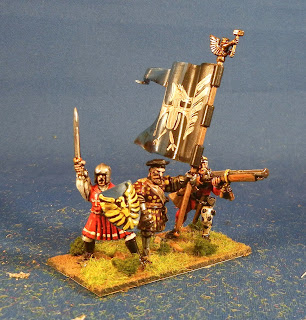 These are GW empire figures (with a bit of other stuff mixed in) so they are a tad on the beefy side. After doing a more uniform group, I decided to be a bit more random with these guys, trying for a mercenary or levy look.

The four bases are all blades (or maybe spears, depending on what you want to play them as) and are mounted on 60mm frontages. I think there may be a swordsman hidden in there somewhere. 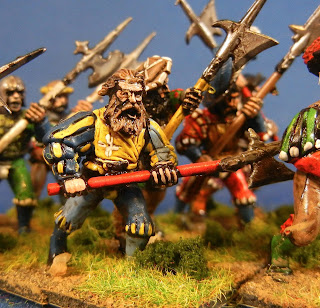 It was nice to clear these fellows off the painting table. I still have another 30 or so spearmen to go before that box is empty. But they can wait a few weeks until a rainy day gives me a chance to assemble them. 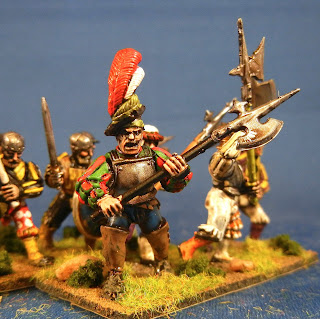 Up next: I have 112 10mm AWI Americans on the table, with the flesh and white done. These are a commission and I started with the more formed New York troops (so blue jackets and red trim). I'm hopeful I will get these fellows finished by next week (work will be hectic this week). Then onto some 10mm Pennsylvania troops. I may also do a few LotR figures in between that I picked up at the MayDay auction last weekend.
at 10:13 AM No comments:

The Edmonton Wargame Group held its seventh or eighth annual MayDay gaming convention today. There were over 40 gamers in attendance. 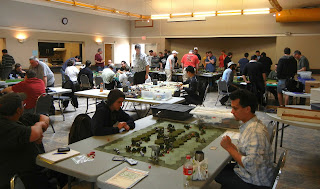 A big part of the draw was a Warhammer 40K doubles tournament. there was also a large silent auction. 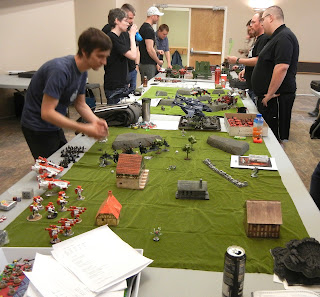 I ran two games today. The first was a game of Epic Battlelore with the reluctant allies rules in play. This pitted the forces of Arthur against Mordred in a guess at Mount Badon. 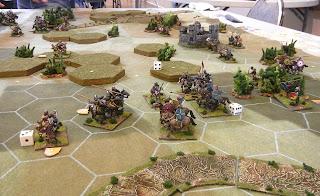 Despite heroic last-minute efforts by the Arthurian players, the forces of evil managed to take the day (dramatically) in the last turn. 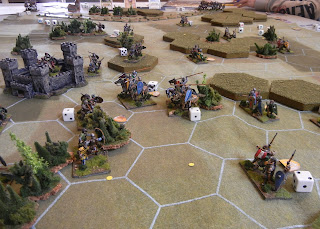 The second game I ran was a Star Wars adaptation of Memoir '44. We played this twice in two hours and I think it went well enough. 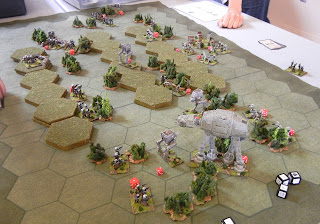 I snapped a couple of pictures of other games. This is Bruce's ACW game using 15mm figures and Fire and Fury rules. 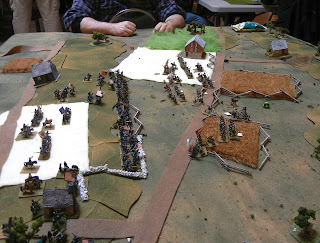 Scott hosted a game of War Rocket, which included a killer asteroid. 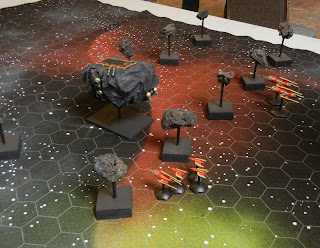 And Jonathan hosted a WW1 game using a Two Fat Lardies' rule set (Through the Mud and Blood, maybe?). 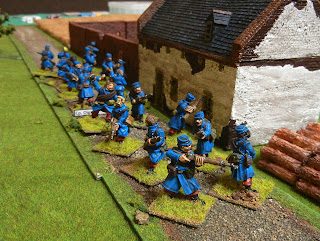 Apologies to those whose games I didn't get good pictures of. Another successful convention, thanks to the hard work of Jonathan, Mark and Terry. Now to sort through the junk I won in the auction.