Craig brought the girls by for a playdate today and while they had fun in the basement, we played a couple of games of Epic Battlelore. The last time we played Craig walloped me good so I was out for revenge. 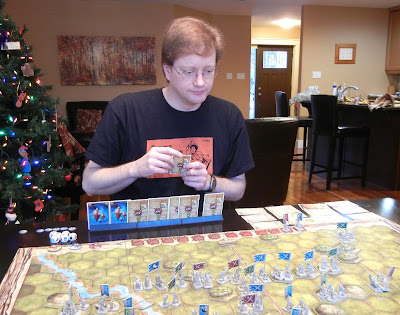 We set up a playtest of my MayDay game to see how it ran. I think I'm going to run the "reluctant allies" version for MayDay but we just played a two-player game. In game one, I managed to win on the right, with the horse eventually outflanking him and starting to roll up his line. Good command cards plus a lucky bit of lore play really helped me out. 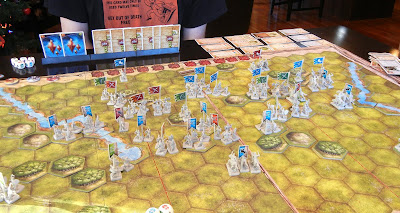 We had enough time to play a second game and we kept our same sides. 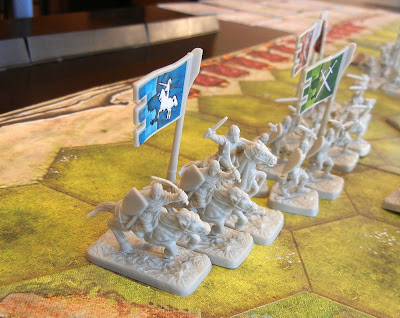 In the second game Craig formed a solid (and very intimidating) line in the middle. I (uncharacteristically) fell back in the middle and marshalled my forces. Again, lucky horse play on the right helped and I was able to use my cavalry in the middle to tip him over the break point.

Overall, I'd say the game will work for MayDay. There are lots of units, a bit of interesting play with the lore deck but nothing too complex for first time players. I might well shorten the river on the left and move the ford closer to the far side of the board to change things up. Need a bigger playtest with four guys to see how the reluctant allies variant affects play. 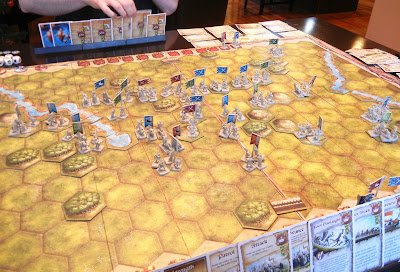 Up next: More FoW French tomorrow. Dave is also stopping by for some HoTT. I have some Roman auxilia on the painting table and Bruce is coming over Monday for some Star Trek Fleet Captains. And the club is Tuesday! This is a good gaming start to the year!
at 7:49 AM