I was driving by Terry's place a few weeks back and remembered he'd offer to gift me some 3-D woodpiles. So I stopped in for a chat on the porch and he handed me a clutch of stuff he's printed. Please don't ask for details about printing--I've no idea beyond they were grey-blue. 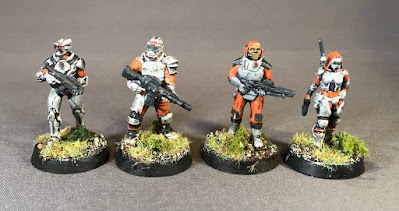 I slapped some paint on them and, while I don't think I did the figures justice (they were very nice), I think they turned out pretty good despite my painting! I've been watching a lot of 70s sci-fi (Star Lost, Space 1999, Planet of the Apes) hence the basic space BDU approach to their gear. 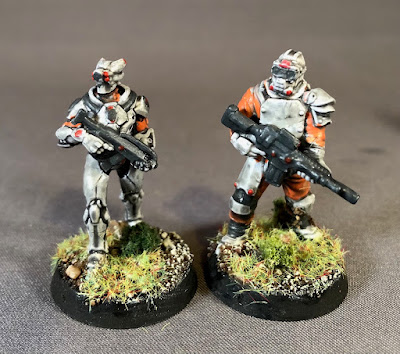 The fellow with the open face (below) is an old metal figure and he fits in pretty well with the printed ones in terms of scale. I don't think I'll be getting into printing figures, but wow, these are awesome. Only brittle part was the gun barrel behind the lady's head (below) which I broke off while basing and then reattached with crazy glue and swearing. 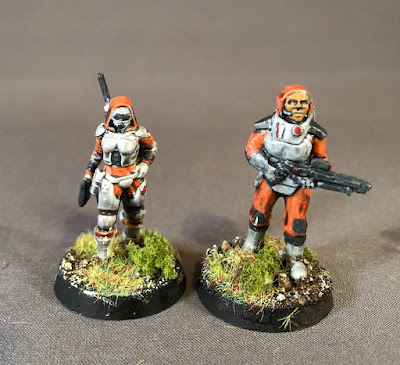 Terry also gave me some terrain pieces (two wood piles) which are at least as nice as the cast resin I used to buy. 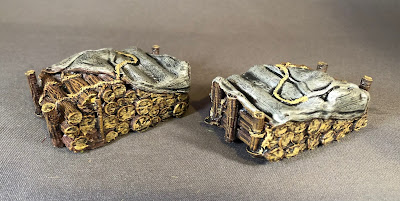 They are a touch big for 28mm gaming (with 25, 32 and 28 figures for scale) but you can just shrink the printing size if you want.

They fit in reasonably well with these 54mm figures. 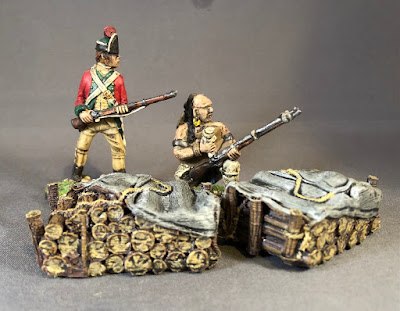 A few figures this week, comprising some 28mm richy-riches from Pulp Figures.

Here we have a lady and her beau out of the evening. Dude is just begging to be gunned down in an alley. 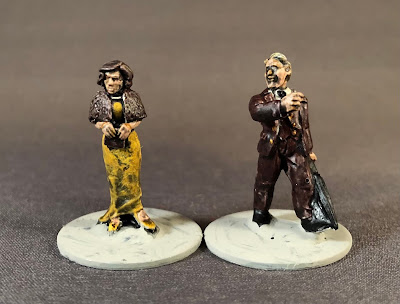 Here we have two older rich people ready for a night at the theatre and maybe a butler, who is thinking about slowly poisoning them? 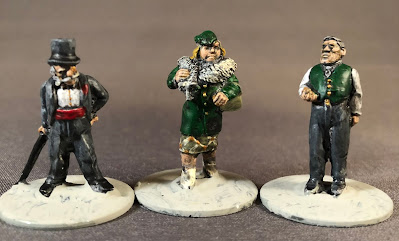 Up next: I have some 3-D printed minis a friend gave me on the bench. Pretty impressive sculpted. I won't be buying a printer but, wow, these are cool. I also got my copy of Rommel this week and am keen to try some WW2 when the club re-opens (autumn at a guess).

Apologies for forgetting to post last week; work was nuts and blogging just completely escaped my mind. So a double-post this week! 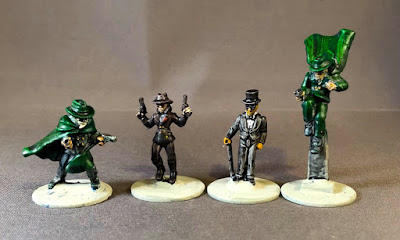 I finished off a couple of packs of Pulp Figures miniatures. Above, we have some random pulp heroes and below a group of scientists.

Bruce recently purchased some 2mm terrain for a project and slightly over-ordered towns so kindly dropped off the excess. I knocked of about 10 towns like this. 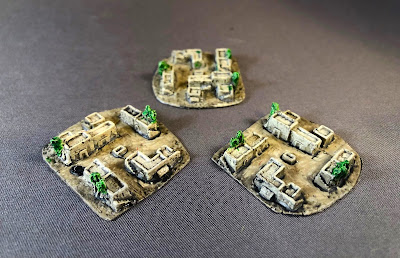 I love 2mm terrain. I'm not sure why, but it is just so cool. These villages from Irregular Miniatures would do for North Africa, the Middle East, or Central America in almost any era. If you can overlook the trees, they'd also do for your favourite hive of scum and villainy. 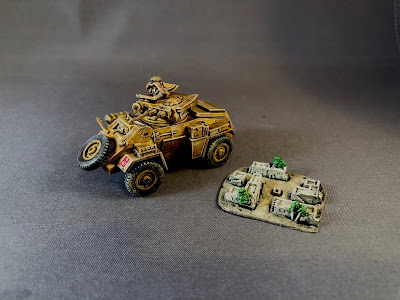 I put a 1/72-scale armoured car in to indicate the size of the buildings. I also dug out two European towns that I painted awhile ago. 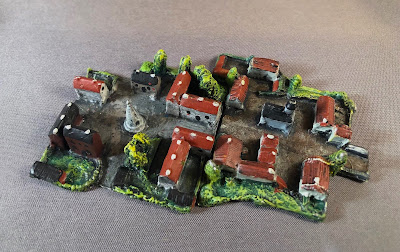 Up next: No idea. I have one pack of 28mm pulp left, some larger Harry Potter figures, and some even larger Star Trek.
at 4:00 AM No comments: