Last of the pulp

I'm finishing up the last of some 28mm Pulp Figures gangster that I got for Christmas. First up are a boss, his safe, and either his secretary or a reporter (pose could work for either). 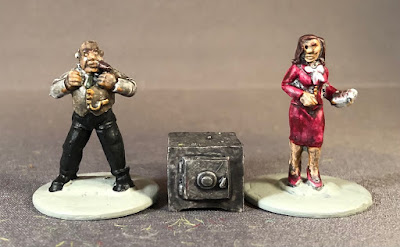 There were also some henchmen. I hate the paint job on the brown guy. The middle guy looks like Vincent price (I think he was supposed to be a doctor or scientist). Our friend on the right is an accountant but looks vaguely like everyone's favourite failed Austrian painter. 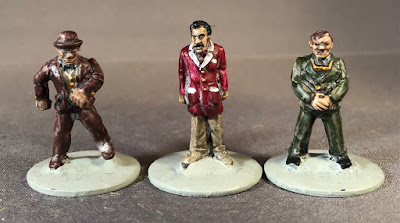 Finally, I have two pulp villains (skull guy and the red hood). I've been thinking how much I enjoyed Gotham and having non-super villains so painted these with that in mind. 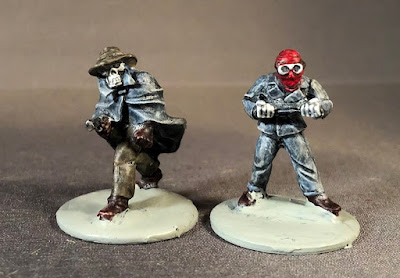 Up next: Probably some 6mm ancients.
at 4:00 AM No comments:

Get your hands off of me...

Today, some 28mm Apes from Crooked Dice. These were a Christmas gift that I am just getting around to painting. 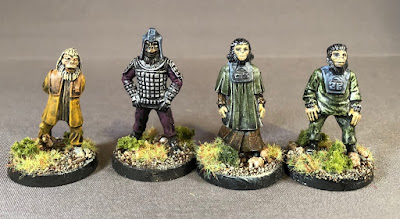 First up is Dr. Zaius, suspected of holding anti-human views. These figures were part of a character set with all of the figures having only one piece. 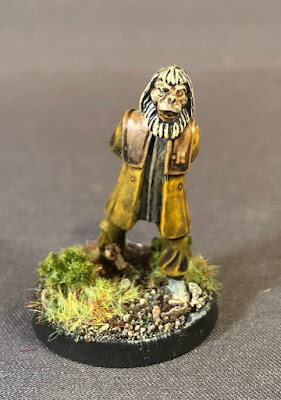 General Ursus. Not a bad pose for a one-piece figure, 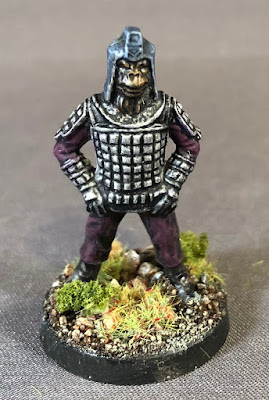 This is Zira. I'm not sure why so looks so flat in this picture--her face has more character in person. 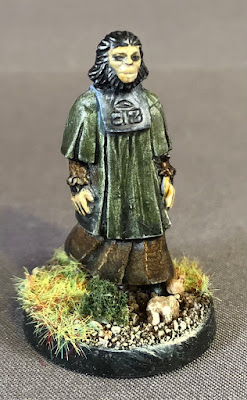 And Cornelius. Probably the lamest of the character poses. Very two-dimensional. 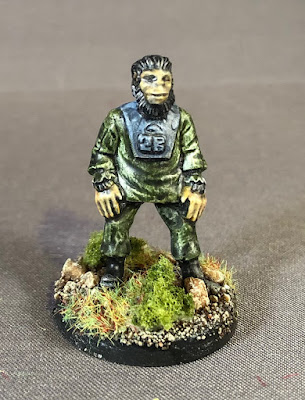 Then there were these two-piece hench-apes pack. The heads and bodies were separate, with the usual divot in between the shoulders to take a neck. The problem was the heads had no corresponding pin and all of the contact is made by the fringe of hair at the bottom of each head. 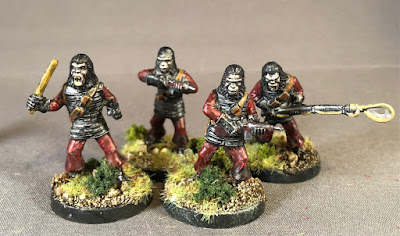 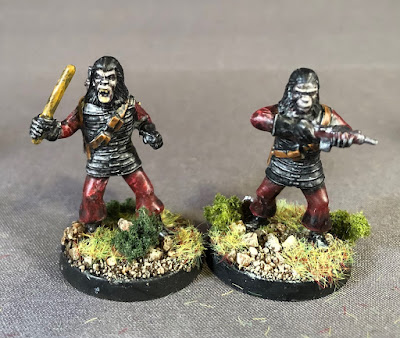 The only bad head attachment as the fellow with the pole. 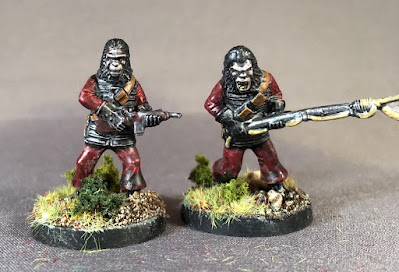 Overall, this was a fun project and I look forward to getting these guys on the table in some kind of pulp game.
at 4:00 AM No comments:

Some more Pulp Figures that I got for Xmas are finished. These are a group of radio-era vigilantes. I recently finished watching Gotham and quite enjoyed the pre-Batman aspect of the show, with less super villains and more grit. 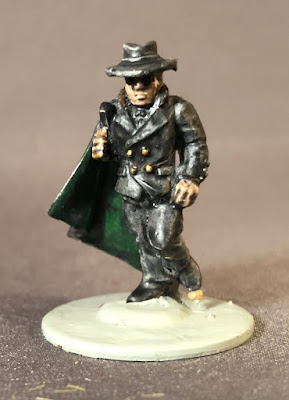 Kato. Apologies for the soft focus. Not sure what happened there. 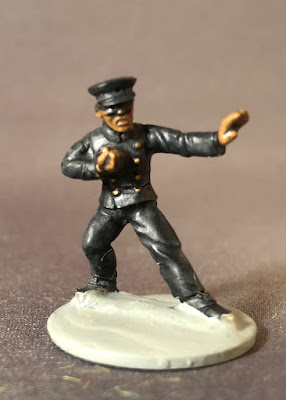 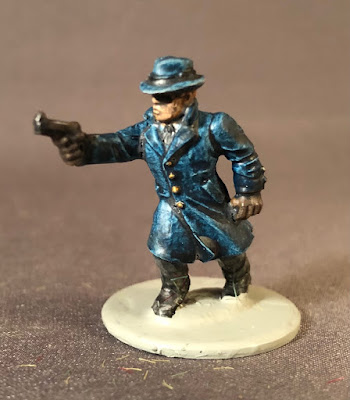 Not sure who this is; perhaps no one in particular. 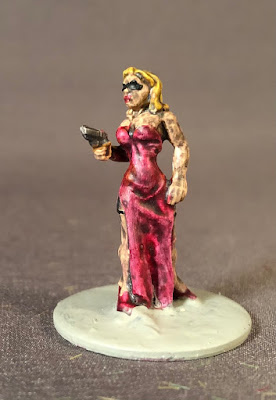 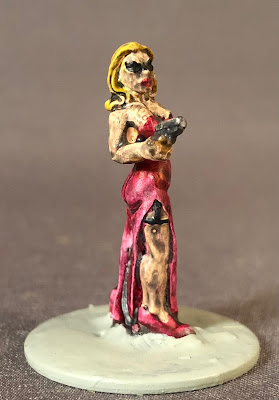 This week I have a mixed bag of TV figures. First up is the $6 million man and a pair of Big Feet. 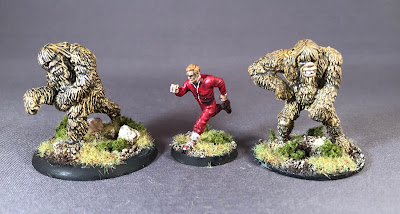 Steve Austin is from Crooked Dice and came with a bionic woman, whose ankle broke immediately. Sadly, we did not have the technology. We could not repair her. So into the bin she went. The Sasquatch are Pulp Figures. 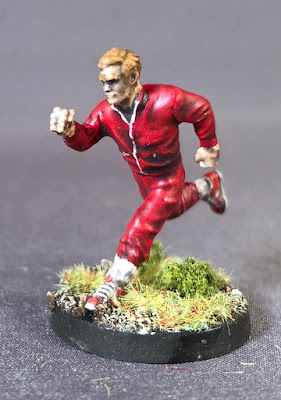 The figure has a Heroclix vibe but is metal and has great detail (note grip pattern on right shoe sole!) 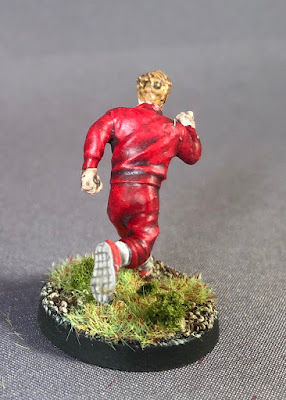 I bought this figure mostly so I could tell this story. So, it is 1971 and songwriter Dan Weatherly calls his buddy Lee Majors. Majors is not home but Farrah Fawcett picks up. They chat and she's going home on the red eye to Houston to see her mom.
Weatherly then writes a song, swapping the plane for a train and Houston for Georgia. And, in 1973, Gladys Knight and the Pips ride Midnight Train to Georgia to number one. All thanks to Steve Austin. 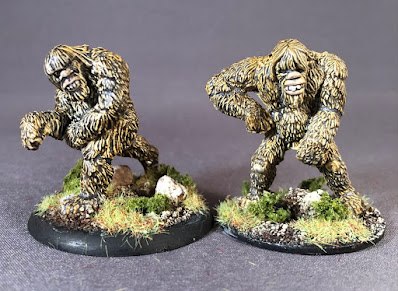 I also knocked off two 54mm Star Trek sculpts. No idea why Janeway's outfit photographs so much lighter than Sisko's. Maybe the wash was different? Almost have my collection complete--just need the elusive DS9 crew sculpts and a Spock (he's on the paint bench right now). 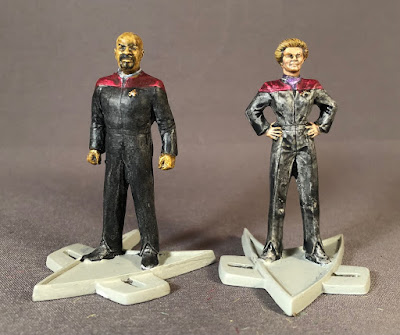