Hammer of the Scots

Bruce pulled out the game Hammer of the Scots this past week. I've never played and, wow, what an amazing game! 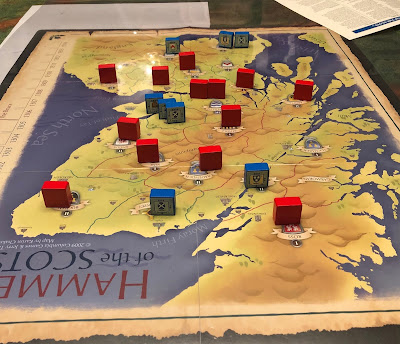 Things started out poorly for me as I managed to lose William Wallace right out of the gate (bad strategy on my part) and Bruce then pushed north aggressively. 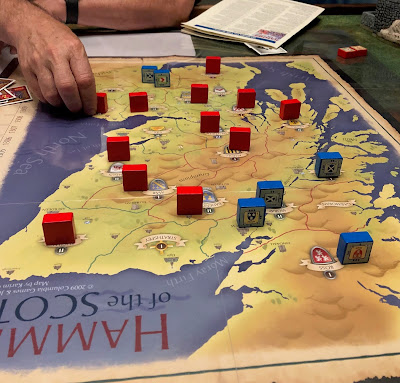 Once I got the hang of the game, I then started to rebuild. 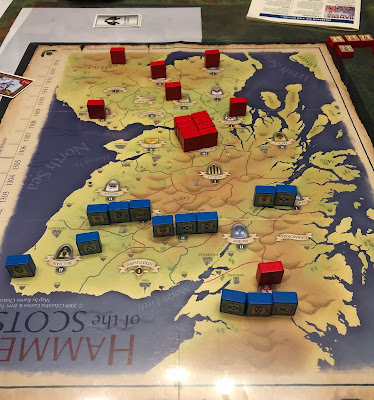 As we near the end of the short Edward the 1st game, Bruce nicely timed an over-wintering and beat me silly, so I conceded with one year to go. 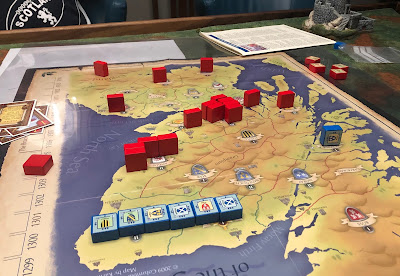 Overall, a super good game that I would totally play again now that I understand what is going.
at 6:00 AM No comments: 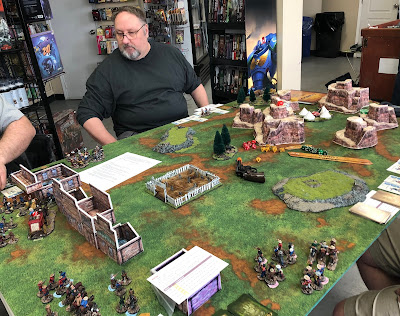 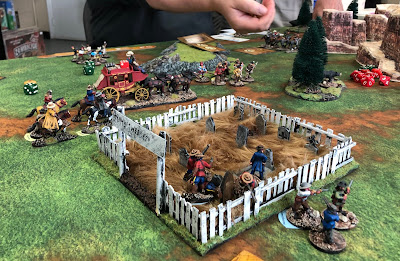 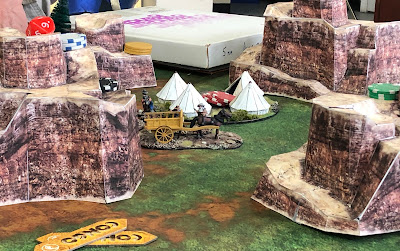 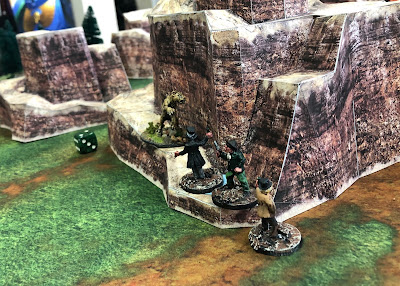 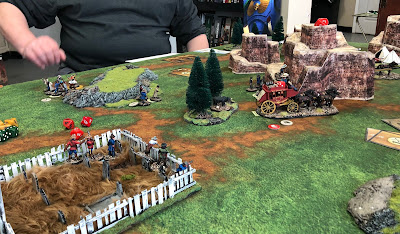 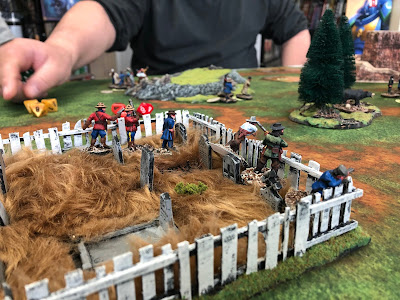 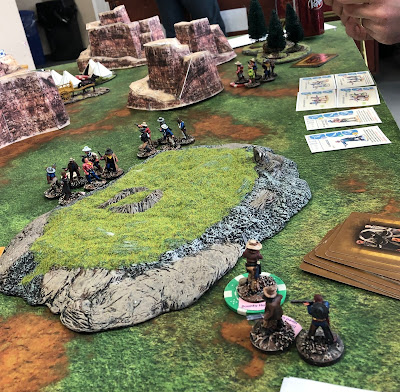 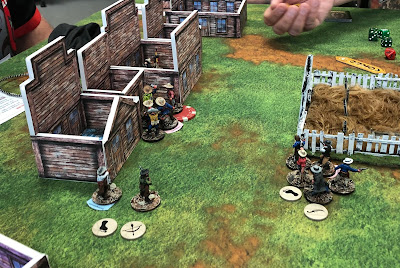 Bruce had me over for another test drive of his old west adaptation of Congo. This time the scenario was Little Big Horn. The visiting team arrived from the left and top of the board. The only home team units were in the village at the bottom right. Other home team units could appear on a die roll. 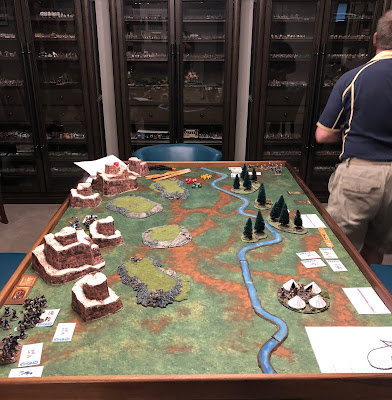 For example, rights behind my set up area on turn two. Leading to... 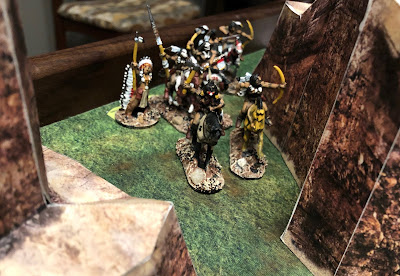 ...this rather difficult tactical issue. 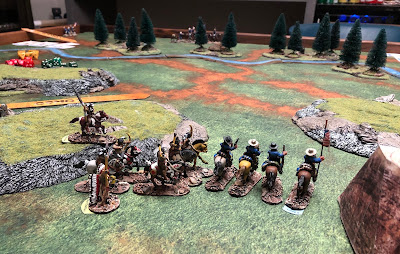 The overall thrust of the game was that the visitor units moved down the right side and across the bottom of the table while home-team units ambushed or chased them. Having to constantly adjust to the home-team units appearing was a good and stressful mechanic ("Oh God, they appear WHERE this turn? Oh no. OH NO!"). 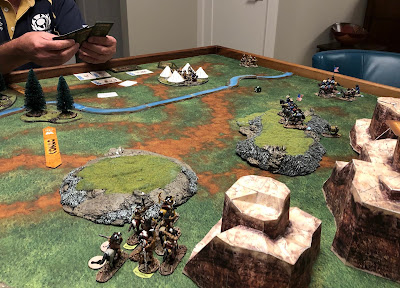 The unit of burros below was completely wiped out in an ambush (removing 1/5th of my overall force in a single turn). Fortunately, the dice were swingy.

One unit of visitors made a stand on a hill and managed to push back (and eventually eliminate) the home-team unit through concentrated rifle fire. 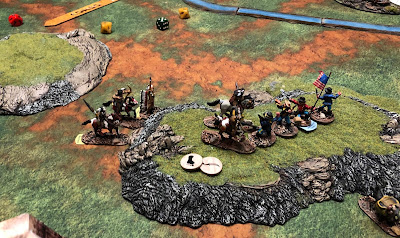 The local's base was eventually captured and the visitors set up (as best they could) on the bottom right of the table to use their firing skills.  At this point, it was almost impossible or me to push any of the home team off the board in the direction required to gain the most victory points so it just became about surviving. 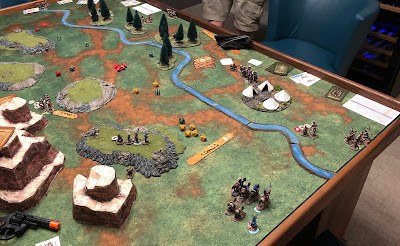 Bruce's new models are pretty sweet (Foundry) and really gave the game a lot of flair. 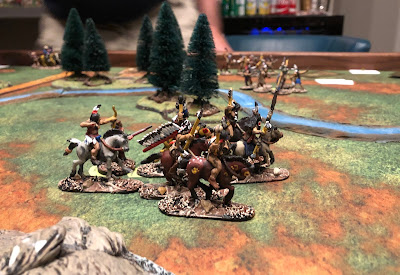 In the end, through the pleasure of the dice gods, the visiting team managed to squeak out a victory point (11-9 or thereabouts). But it all came down to two devastating volleys in the last turn. 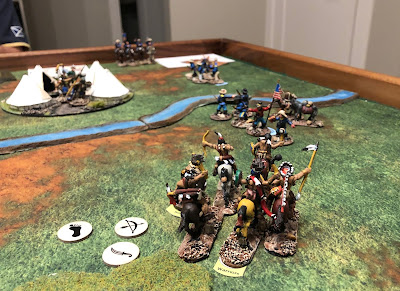 Overall, the adaptation makes for a good game. Lots of colour, easy mechanics and a nearly historical result. Looking forward to seeing this game at the club this week. These rules could work for the Riel Rebellion, I would think. Bruce had some great scenario ideas at the end of the game.
at 7:12 AM No comments:

It has been a busy few weeks so I have gotten a bit behind in blogging. Two weeks ago, Bruce hosted me in another game of musketeers using the Tribal rules. 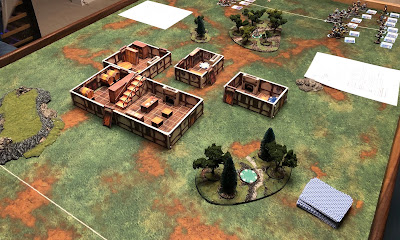 There was a hidden character that the cardinal had to find and rescue while the musketeers tried to prevent the rescue. 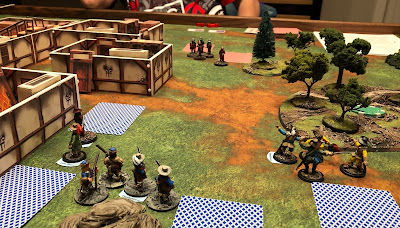 On the right side of the board, I finally got the hang of using shooters to immobilize while swordsmen close in to do some damage. 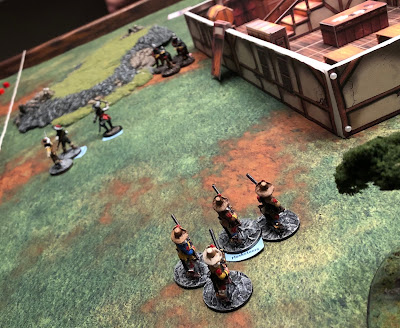 The left side was a bit of a bad match up for the cardinal's forces and, at this point, I figured the game was in the bag. 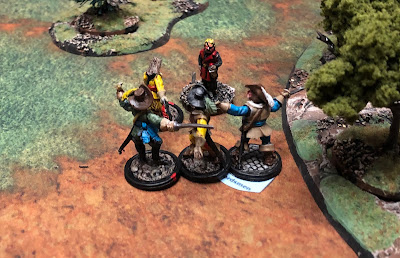 Then the cardinal appeared and greased three units in short order. Jerk. At that point, the cardinal had found the figure to be rescued and I didn't have enough troops left to do anything about it. A great skirmish game because we actually had to fight each battle with cards (instead of just pushing the figures together and rolling dice). Gonna try to graft this system onto some superheroes.

This week, I was at the club and hosted a game of Imperial settlers for Andy, Scott, and Terry. 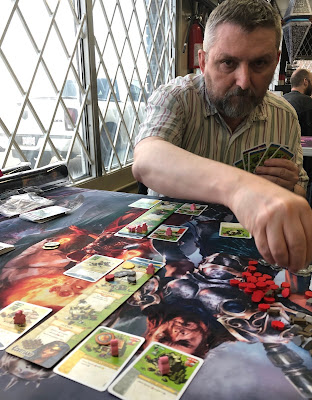 Despite Terry's baleful gaze, I think we had a good time. There are a lot of decisions to make each turn and minimal interaction between players. I was leery of four people meaning a lot of sitting but we managed to learn and play the game in 2 hours. 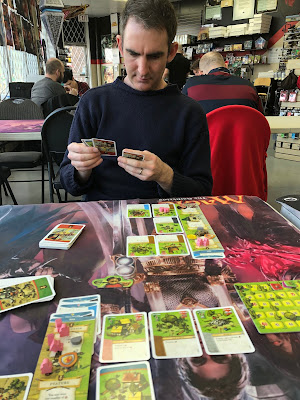 The Egyptians won. Scott played well and it is a good faction. Terry played the Japanese (which were interesting and different). 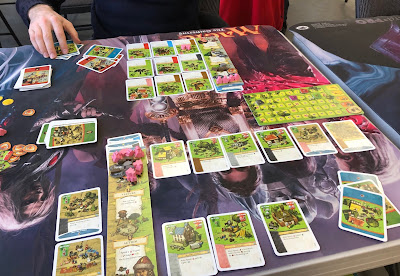 Andy and I soldiered on with the Roman and Barbarians. I was way behind but was trying for a long-game win. Alas, Scott just had too much of a lead by the end of the game. 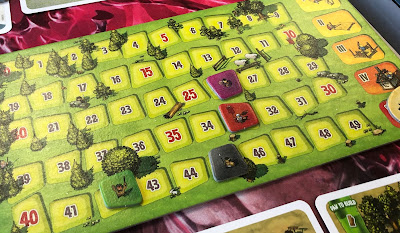 Up next: I am half way through rebasing the 1812 British that I have after a trip to the washer store.
at 3:11 PM 3 comments: