Craig and Arlene invited Jessica and I out for a playdate. While the girls played upstairs, Craig and I duked it out playing a game of Epic Battlelore. Frankly, this was awesome--taking Battlelore to a whole new level. 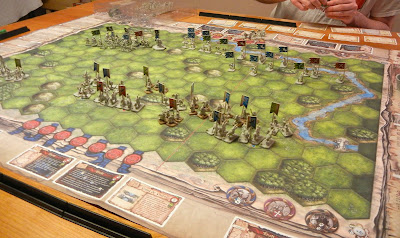 The scenario was part of the For Troll and Country expansion and was really big (to my eyes). Lots of units, lots of separate clashes and my first chance to play the epic rules. I played the Scottish/dwarf side and quickly moved my stout fellows to take a line of hills on my right. This was perhaps my best play of the night. 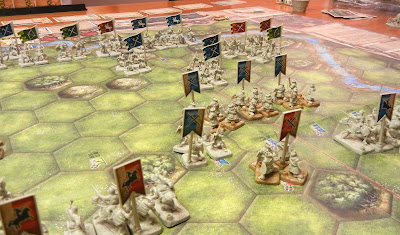 Craig rushed his goblins forwards on the left (I never did get anything going there) and we then saw a grinding series of battles where I couldn't seem to decisively defeat him.

His troll was all bark and no bite throughout the game, stuck against some dwarven crossbowmen on a hill. 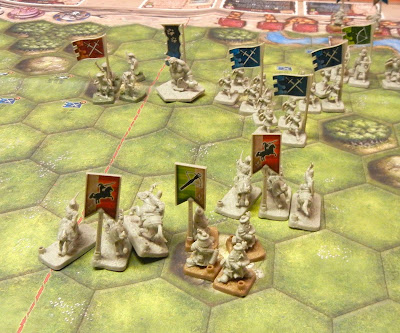 At one point I was sure I had Craig's troll, caught between two of my heavy cavalry but he used some lore to squirt out of that trap. Then I rushed forward with three cavalry units on one of his medium infantry and managed to only to take half of his troops. He then reversed the attack and pounded the snot out of my heavy cavalry for the win. A good and dramatic end to the game.

Overall, epic is a much superior game to regular Battlelore. The common pool of cards, extra troops and greater room to maneuver makes it seem more like a battle. I can't wait for my expansion to arrive. I also leaned a few things about the rules that are helpful to remember. 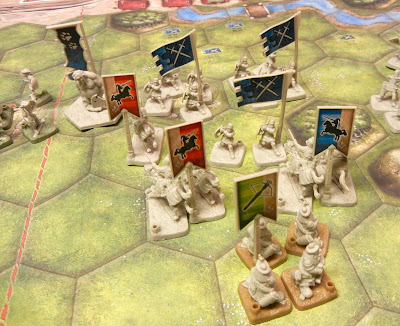 Up next: The club is tomorrow night, I have some skaven underway on the painting table and then I have a stack of 1/72 New Kingdom Egyptians that I'll be starting on.
at 6:08 AM

I also learned a few things about the rules that are helpful to remember.
Do tell!

I love BattleLore too and play it quite a bit on Vassal.

The battleback rules seem to differ from those in CCA. Basically you have to be bold to battle back. That may have been a medieval variant--I haven't run that down in my copy yet.

This game looks great, I've been interested in the C & C system for some time now - nice one!
Regards,