I finished a second box of Terminator figures that I received from Jonathan. I decide to give these fellows a grey jump suit with black trim.

I think these would be useful for modern urban troops or near-future sci-fi (my initial idea had been the MACOs from Star Trek: Enterprise).

Up next: A few more TV characters.

So continuing last week's post about converting some 25mm ST:TNG monopoly tokens, I had a number of figures left over. I painted Guinan as was (since I didn't her). The remainder, I converted into the beginnings of a ST:VGR crew

I converted Troy into Janeway by scraping down Troy's uniform and giving Janeway full coverage with some modelling putty. Clearly, the Perry brothers are in no danger of being replaced. 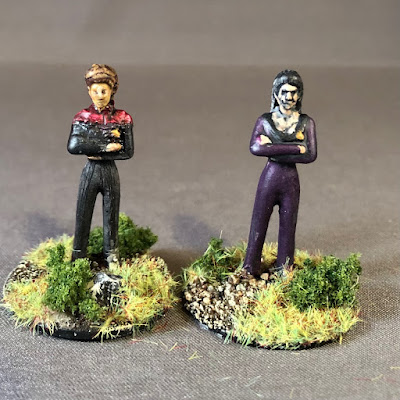 I then cut off Troy's hair, smoothed the back of the figure, etched the uniform line in, and added the big Janeway 'doo. Overall, not terrible. 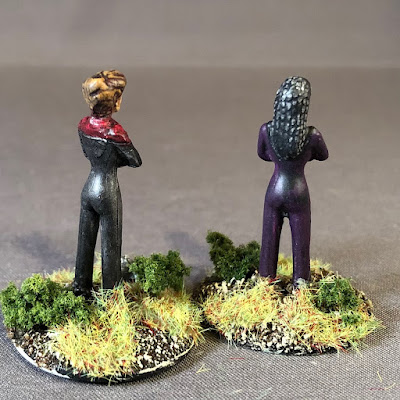 Riker became Chakotay by having his beard filed off, some paint colour reversals, and bit of tiny face tattooing (involving a lot of swearing). This was probably the most successful conversion. 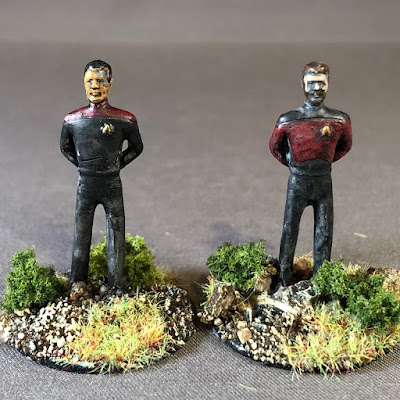 Jordi became Tom Paris by scraping of the visor and the modelling a face and big playboy hair. 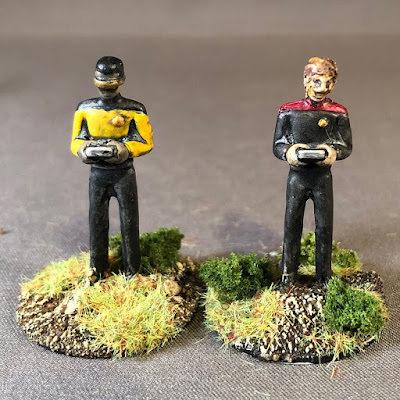 Paris looks better in person but obviously I need some practice with faces! 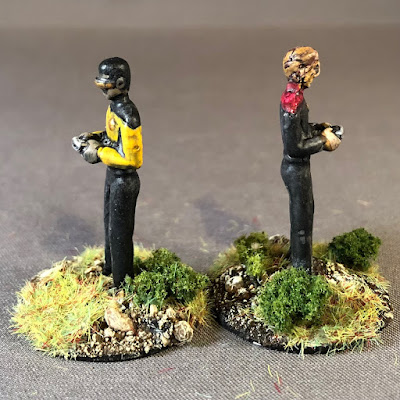 Crusher posed problems because of her lab coat. But B'Elanna work a smock in two seasons (one to cover the actress's pregnancy and one because the character was pregnant). So Crusher became B'Elanna by filing off Crusher's bangs and adding some brow ridges. I also re-positioned her arm a bit. The ridges are easiest to see in person (kind of washed out here). 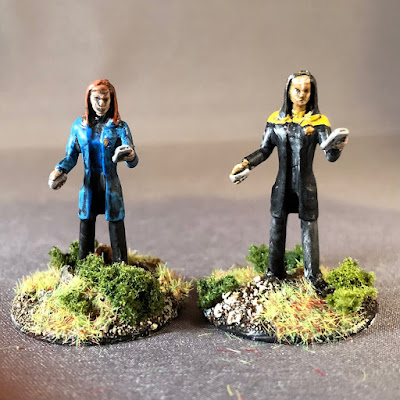 I need a few more figures (Doctor, Kim, Tuvok, Seven, maybe Nelix) to complete the crew so I'll keep my eyes open for another set of figures.
at 4:00 AM No comments: 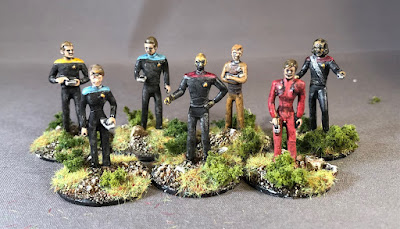 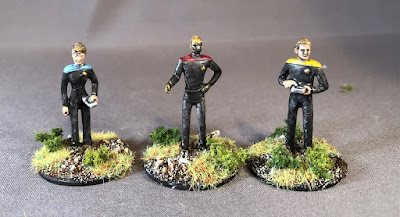 For a "why not?" project, I'm happy. I used some putty to get a start on a ST:VGR crew that I'mm show next week. But I need ("NEED") another set of tokens to finish that off.
at 4:00 AM No comments:

I did not quite get the basing done on the Star Trek figures I've been working on (just ran out drying time) so, instead, here are 17 generic modern special forces and/or sci-fi ground pounders/space marines. 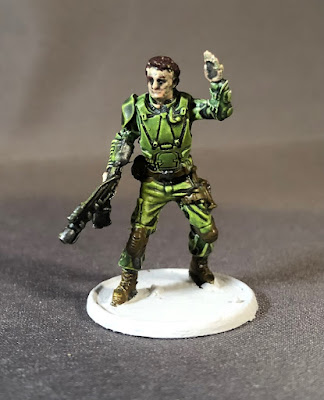 There are 28mm plastics from the Terminator game from a few years back (although the figure above is a resin character figure). Jonathan kindly passed this box onto me.

The box comes with four sprues. Each sprue has four bodies. Three of the bodies have inter-changeable arms and weapons. The fourth body just has a couple of choices of different arms.

I mixed and matched as best I could to avoid same-same poses. I think these guys would do for grunts in a GI Joe army. Or any kind near future or sci-fi setting.

I have another box of these to build. i was thinking of doing them in grey jump suits along the line of the MACOS in the later seasons of Star Trek: Enterprise.