I spent a few minutes this weekend rebasing some of the superheroes I did this summer onto more urban bases in anticipation of (1) me building some urban terrain in 2012 and (2) Ganesha games releasing Power Legions sometime thereafter. 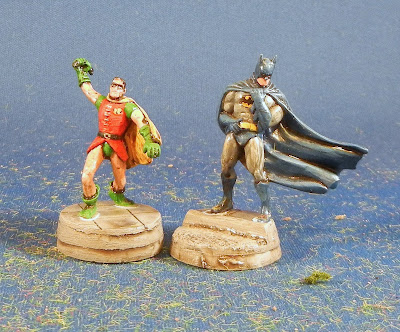 First up with Batman and Robin. These are repaints of heroclix. 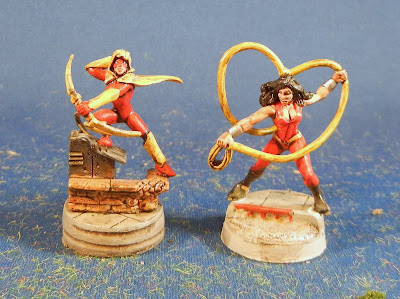 I also rebased a bunch of Teen Titans, including Speedy and Wonder Girl. 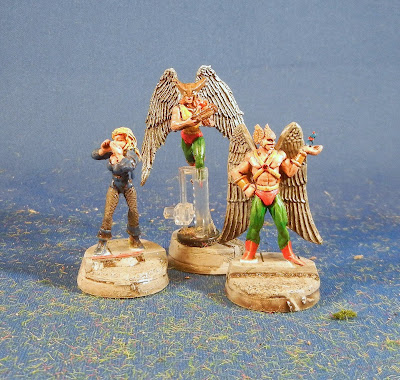 I also did some Justice League of America figures and a bunch of nemeses for Batman. There are a few more generic bad guys to be rebased and then I'll turn my attention to some more figures.

Up next: I have a game scheduled with Bruce this evening. And a large package just arrived (10mm AWI?) that I will sort through at lunch.
at 9:44 AM

Great collection of supers and I love those bases!

Thanks guys. I'm happier with the bases than the "parkland" versions I made out of washers, sand and flock. But the quality control was not great on the resin pours. All told, they were a good purchase. I also have a couple of fire hydrants, mail boxes and phone booths for my (as yet notional) layout of gotham. But that is a 2012 project once I finish of a few more armies (28mm Carthaginian and 28mm Renaissance).

Very cool. May I ask what games you are using these for? I'm trying to get into Heroclix, but the rules are scaring me off already. I'd love to have another game for these figures I picked up if Heroclix doesn't take.

I've been waiting for the Ganesh Games rules Power Legions. I have also got a copy of Super System.