I received a package last week from Tim in Saskatoon which contained the pieces for several 1/72 DBA armies as part of a trade so I thought I'd dive in. First up are the the lighter foot elements of a Macedonian army. 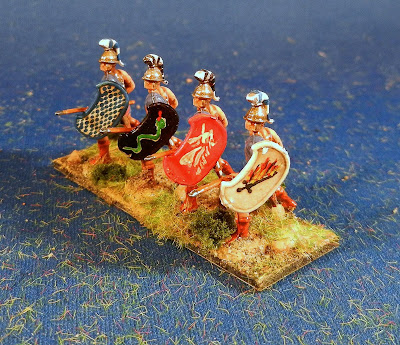 This is a 4Sp unit based on some HaT figures. Two sprues arrived primed white (ack!) and partly painted so I finished the job and decided to do the rest of the army with a white primer (I usually prime black). 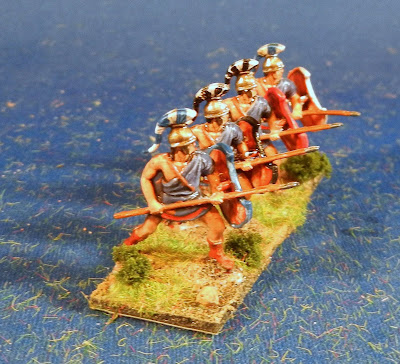 I think the figures turned out alright but I might well have used different tunic colours. Anyhow, done is done and I think the wash helped add some depth to the figures.

I also put together four bases of 4Ax. These allow the army to morph between Alexandrian Macedonians, Imperial Macedonians and the various Successor lists. Why make a one trick pony is my approach with 1/72 as they are so cheap. 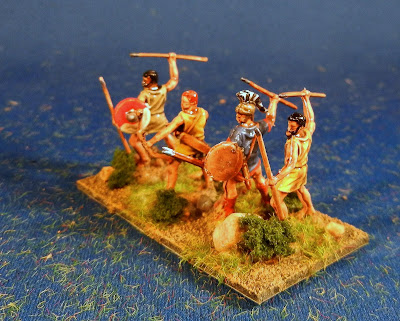 Again I was pretty happy with the wash although I'm not sold on the white primer. And I did two bases of 2Ps. 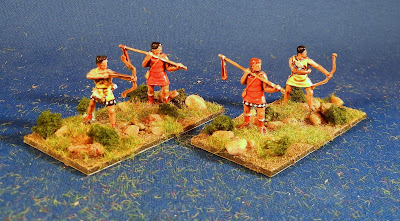 Up next: I'm currently locked in mortal combat with a box of Zvezda Macedonian pike (what the hell was the sculptor thinking!?!) and have troops for three bases painted and washed. I also have a Greek catapult built, painted and washed. Next up are the cavalry and three more bases of pike. And then maybe an elephant and I think that completes the army!

I will be putting this project momentarily on hold to base two sci-fi armies for HoTT that I picked up at the Red Claw swap meet. But that should only take a day or two then back to the Macedonians!
at 8:51 AM

Y'know Bob... when I get stuff that's been primed white, I just paint it black (with some slightly watered down black paint) and carry on as I normally would....

What's up with the pike? I didn't have that good of a look at them before sending them on. Are they "at Charge" (with pike leveled)? That pose drives me cRaZy!? I mean really... who could ever use that?! maybe for dioramas...!?

Yes, at charge, crazy-ass long (maybe 5 inches?), and the few fellows at port are sculpted so you have to attach the top half of the pike to the bottom half by trying to glue the two ends of the soft plastic together (might be able to create a sheath out of tinfoil or something to strengthen the join).

So I cut the pikes way down and tried to fiddle them into a better position. Oh, and the arms are separate. Probably great models, but not so great from a gamer perspective! THey look fine in teh end but a fair bit of cursing to make!

The two-part pikes are held together by little tube-like joins or sleeves that are on the sprue. They are attached to a flat plate and need to be cut off.

I have found the zvezda stuff to be very cleverly engineered, they pop together without needing glue if you get the angles right when you assemble them. If you are off or have the wrong arms on the torso, they won't go together.

Yeah, the true scaled sarissas are awkward for gaming. They also flake quite badly because they bend so easily.

Ah, so that is what those things are! Good to know. Still too long for gaming purposes. I'm hopeful the primer, acrylic paint and future sealer will help the paint stay on the shortened pikes I'v used.