Some more of this large 10mm AWI commission rolled off the assembly line last night. These are British artillery (perhaps 6 pounders?).

These were nice models--assembly was fairly easy. I have run into a small glitch with the limbers (can't figure out how the horses relate to the limber) so I will finish them later when that gets sorted out. I expect these fellows will cause the American militia some concern once the battle gets rolling. 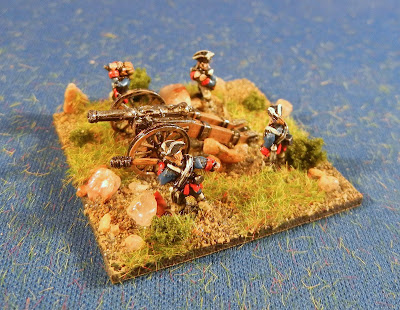 I dropped in on the Kingsway GW store yesterday to pick up some static grass. That will be my last trip there: the store reeked of BO and the service was more than vaguely hostile. This was not my first bad experience there but it will be my last. 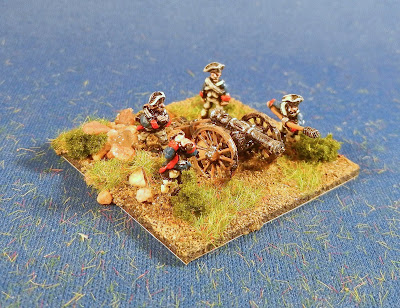 Up next: The 2nd Guards Regiment for the British are just drying and I have some more guys underway. I also have three 28mm knights about to be based up (heroes in HoTT, I think) and some more superhero-types to get rebased.
at 9:26 AM

They look lovely!!! wonderfull basing and painting at such a small scale!!
Cheers
paul

Thanks Paul! These are very nice figures. The manufacturer has some amazing paint jobs (trim on the cuffs!) that are beyond what I can do.