I'm back to painting some 1/72 Macedonians for a DBA army. I finished three bases of pike and the artillery piece last night.

These pike at Zvezda. Pretty figures with lots of depths but a fair but of assembly and the pikes are too long to game with. I chopped about half off these pikes to make them workable. 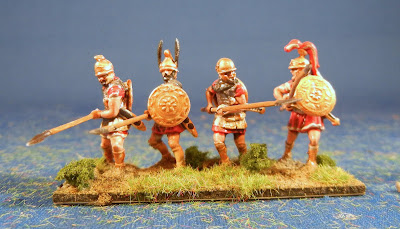 That said, the figures are nice enough looking. I have three more bases to do--one more with pikes down and two with pikes up to facilitate ranking them. 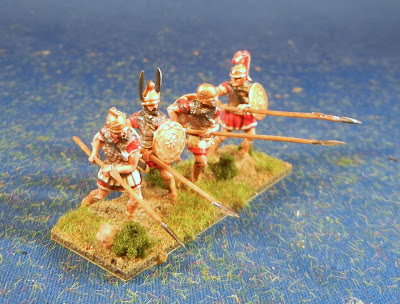 I also finished a HaT Greek artillery piece I bought a long time ago. This was a nice sculpt. 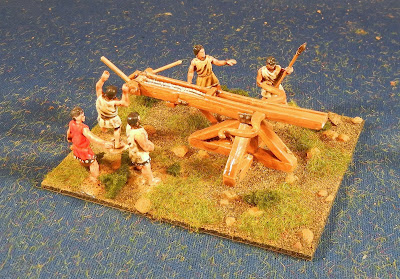 Up next: I have the rest of this army, including an elephant (thanks Mark), three bases of cavalry and the remaining pike built, primed and underway so I'm hopeful to post the finished results during the weekend. These fellows will be contribution to the EWG/Warrior of Time auction. I'm not sure what is after that--perhaps the remainder of a WW1 British army? Then back to the renaissance.
at 6:10 AM

The sarissa conversion is a good idea for gaming, the Zvezda kit has too many in the levelled pose. Most of the pezhetairoi should be holding them elevated and the pose composition of the box is biased the other way.

Did you drill out the hand and insert the business end of the sarissa?

Thanks Dave. For the fellows with levelled pikes, I just jammed the butt end in, having nipped off the spike.

For the fellows holding the upright, the figures come holding half a pike so I just fashioned a "point" on the top end.

I'm actually surprised how well the leveled poses will still rank up together--basing then on 60mm widths leaves a fair bit of room between figures. And coating the pike with Future several times seems to allow them to flex without flaking.

Yes, and if you take a bit of care in how they line up on the bases they will rank up okay. The bigger worry is what happens when you try to put them in base contact with enemy, especially if they have pikes too!

Yeah. For the most part I just suggest to my opponent that we "know" they are in contact and sort things out when the contact is resolved. Same with hills that are too steep or slippery to hold bases. But I'm hardly a tournament tiger in that regard!