With cooler weather and sunset coming earlier, I've been spending more time in the basement painting. These 28mm pikemen (from the Perry Late Medieval box) are the first to roll of the production line in awhile.

I've tried to paint these as early renaissance German pike (are these landsknechts?). Thus a slightly less flamboyant colour palette and fewer feathers and whatnot on the helms than these more Italian fellows. 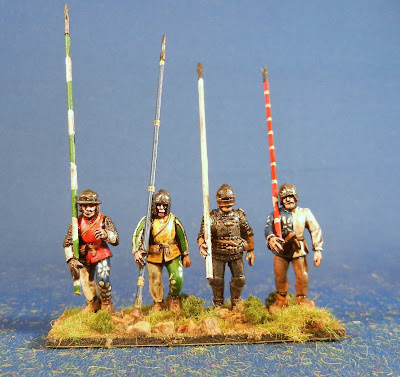 I think the pikes would benefit from one of them having a colourful banner attached to the top so I may add a tinfoil banner to each base later on. 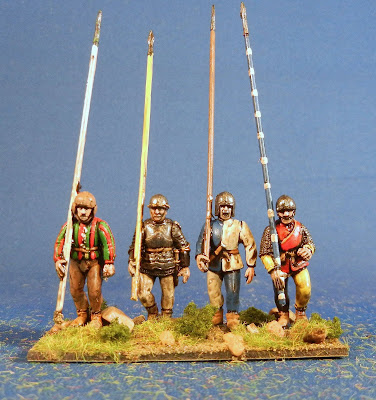 I appear to have gone a bit overboard with the flower motif. Perhaps a flashback to the wall paper in my dad's foyer during the 1970s. I am continuing this motif with the next set of figures though for consistency. 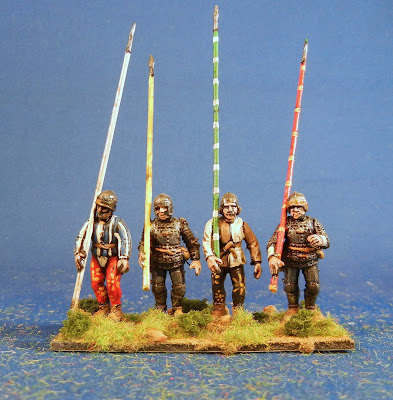 Up next: I have 9 crossbow and 9 shot figures almost painted to flesh out the orbat of this army. Add in the mounted and artillery (here, here and here) I did earlier and a few skirmishers and I think the basics are here. And I still have a huge set of GW Empire to make a more Italian army.
at 7:20 AM

Landsknechts were German mercenary pikemen and I believe they were pretty flamboyant as well... These look great, though!

Okay, I will amp up the feathers and flowers! I think these figures are meant to be late medieval so I was going for a slightly less dudded up look than the Italian renaissance fellows--something in between the 100YW and the Italian wars so the figures could go back and forth some.

very nice. Look impressive. Will be great once the whole unit is complete.

I know this is a very old post. I love the German pike and your imaginings of how they might look. Early renaissance warfare is one of my favorite periods.
I have studied several woodcuttings of the French at the battle of Fornovo. The footmen look very similiar to these guys! You did a great job. I've been wondering what soldiers who aren't Landsknechts (and probably poorly motivated foot) could have looked like. They probably were starting to wear hose and getting away from the medieval looking armor (the jack?) for metal curaisses.
You captured it quite nicely.

Thanks Ronald! Wow, that was a long time ago. Renaissance isn't really period but your suggestions seem pretty sensible. I wonder of some metal manufacturers (e.g., Old Glory) have some figures that might give us a hint?

I always take uniforms with a grain of salt until the 20th century.
Just because some German mercenaries wore outlandish uniforms doesn't necessarily mean ALL of them did.
I suspect those renaissance art pieces are somewhat stylized to make it easier to draw all those figures. Those artists were probably motivated by hunger more than accurately portraying the arms and uniforms of a battlefield.

My amateur historian sense thinks that until a broad range 16th century writers mention troops wearing the garish uniforms, soldiers probably wore a blend of 15th century and early 16th century clothing. Your pikemen are what I imagine in this regard.

It's the same idea with the Napoleonic period. I highly doubt French soldiers all wore the exact same thing while in the field (except maybe the Imperial Guard). There were probably different hues of blue and shades of white.
I highly doubt appearance was super important in an army where merit and capability got men promoted. Although garrison life was probably more organized and proper. When men start dying, no one cares if someone has a sky blue or regal blue field coat.
My French 6mm troops will be mismatched and ragtag... except the Imperial Guard...and pre-1806 Prussians.