The great Labour Day 2011 purge continues with this Romano-Brit DBA army. These figures are 15mm Splintered Light Romano Brits painted by me. They come from a smoke- and pet-free home. The army's record is about 5 and 9, but that is more about my generalship that the army itself.

First up are three bases of 3Kn or 3CV including a mounted general with standard. Bases are 40mm frontages with proper depths.

There are three auxiliary units. On the left, we have a base of dogs. If you were using the army as a HoTT army, these could be beasts or a magician. In DBA you could use them as a horde. Then there is a base of 2LH. And finally a base of 2Ps.

There are 8 bases of 4Bd/4Sp including an optional general base. There is a close-up below of the general base with druid on the far right. 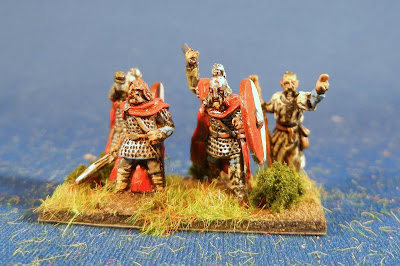 There is a custom Barker-marker with some standing stones and two mounted figures. 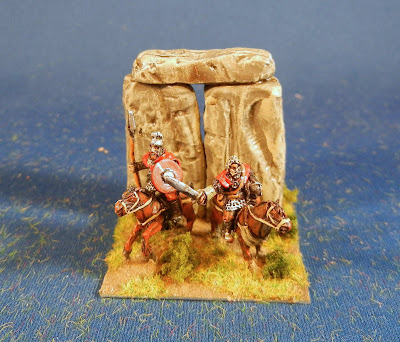 As this is my last 15mm DBA army (I'm moved to 28mm), I'm also including a cool camp. This is a 6mm camp with a bunch of druids sacrificing something (a sheep? a Saxon?) on an altar amid a henge. I will also throw in a 2x2' GW cloth mat that matches the flocking on all of the bases. This is cut from GW's newest battlemat. 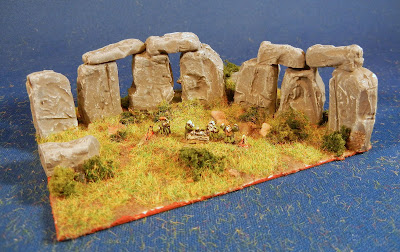 I'd like $100 OBO plus $20 shipping in Canada or the US. If the shipping is less than $20, I will refund the difference; if it is more than $20, I will eat the extra. All bases individually bubble wrapped. Offers to bob.barnetson@shaw.ca .

Great painting! love the dogs, what company do they come from??
Ray

Very nice, I wish I could see my way to buying these. good luck with the sale.

Thanks Matt; that is very kind of you.

These are now sold.