The first infantry units of my WW1 British HiTT army in 1/72 are now done. These are some old 1/76 Airfix figures that I got from Mark in trade. Like many old sculpts, there is a lot of detail but it is relatively inaccessible to brush.

After much fretting, I decided "screw it, we'll see what happens" and primed black, blocked in the colours and dipped. The end result turned out much better than I thought it would. 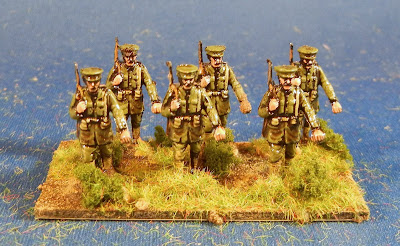 There are two bases of six infantry each in marching poses. The frontages are 60mm and I put six figures on a base because, well, I had a dozen and four looks too sparse. In my mind, there are green troops marching up from the rear to reinforce the line. Later bases (with more active poses) will have four figures per base (casualties being what they were). 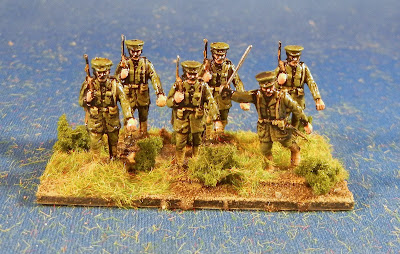 For 40+ year old sculpts, there is a nice amount of detail. I didn't pick some of it out (e.g., pack clasps) because I was going for a relatively simple paint job (there are a lot of these figures!). I also ended up sealing the hell out of these figures (three coats of Future) because I fear paint chipping on the riffle barrels. 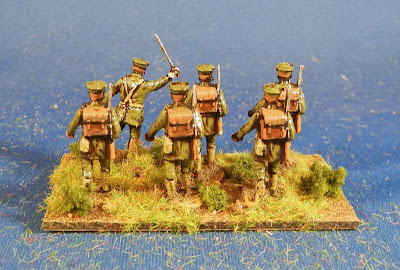 Some of the figures I am painting now have quite a lot of flash. Some I have carved off (above the waist). The rest I have left alone (around the putties) and we'll see how that looks. It is inaccessible and the soft plastic can be hard to trim. Below you can see my troops turned out with the "rest" of the army so far. 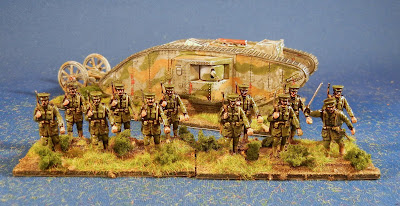 Up next: I'm off to game with Bruce tonight. On the painting table are about 10 more units of WW1 British infantry. I'll then shift to some horse artillery and support weapons. I see I'm over the 1800 figures painted threshold, aiming for 2000 this year!
at 7:32 AM

They look great, Airfix figures still have their uses.

Thanks Dan; yes, these figures are just fine for what they are. I expect the old ACW figures would also work well for the massed kinds of units we expect for the period.