I took my daughter to the Edmonton IFV show at the HMCS Nonsuch yesterday. It is fun that she still thinks this stuff is cool to do with dad. I expect that will end shortly but I'm milking it for all it is worth now. 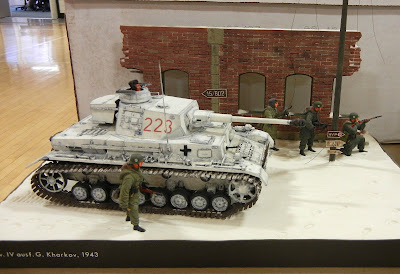 We arrived early (around 10am) and the hall was a bit spared for displays. We did see some amazing vignettes. Above is a Panzer 4 on the Russian front. And below is another Panzer 4 on the western front. It looked as if the fellow was modelling all version of this tank as there were many others. 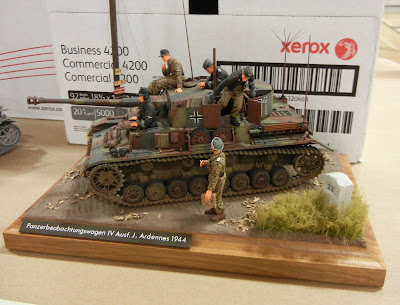 This Russian tank was quite cool and had a very effective bit of staging. Reminds me of Matchbox kits as a kid. There were also track links from various tanks, helmets and shells. It was fun to explain to Jess how the shells worked.

She was fascinated by the torpedo out front the Nonsuch as well as the wooden model of the original Nonsuch inside the entryway. The we toured the working vintage military vehicles (e.g., a gamagoat) that were out front. 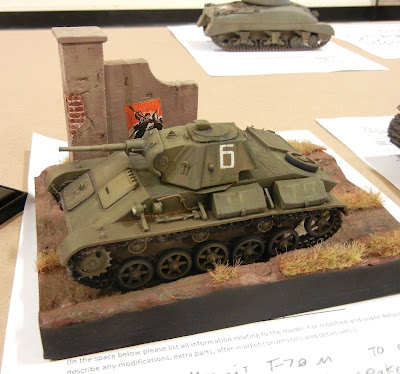 There were also more involved dioramas, such as this Berlin, 1945 ones. Truly, amazing model skills. Useless from a gaming perspective but amazing work nonetheless. 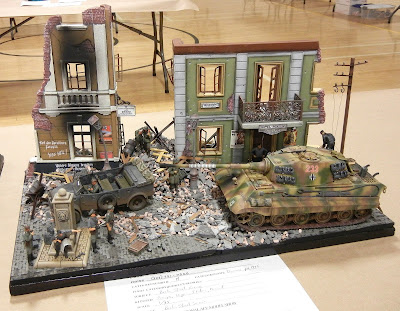 As involved as the Berlin diorama looks there's something that's kind of "funny" about it... those buildings... they look right out of place - everything else look really cool, masterfully executed, but the buildings look like there were just plunked in as an afterthought and don't really belong. I think the biggest thing making them look like they don't belong is the fact that they are obviously both made of a deep red brick... yet the rubble surrounding them are all grey and tan brick...?

I thought that too when I looked at it. I think the issues is one of depth of detail (or maybe granularity of detail). The buildings, while damaged, are quite clean--they were build damaged. The street, by contrast, is a freaking mess. And the higher up you go on the buildings, the crisper they become. Basically they don't fit. That said, hats off to the fellow who conceived and executed it all--detailed modelling like this is so not my thing.