It has been a slow week on the blog as very nice autumn weather and few gardening demands have distracted me from things gaming. But I swung by Bruce's place last night for some pick-up DBA. I am building a 1/72-scale Macedonian army with some figures from Tim in Saskatoon and wanted to give the army a try so Bruce pulled out some old 15mm figs he had. 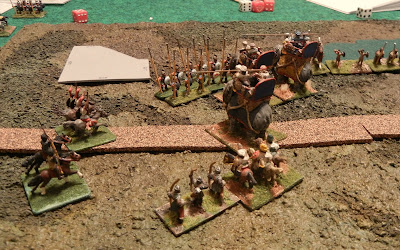 First up we played Indian versus Alexandrian Macedonian. I believe I won this game by mowing down Bruce's pike with my elephants although I think he bagged my general in the process. Nothing like an ugly win to whet the appetite. 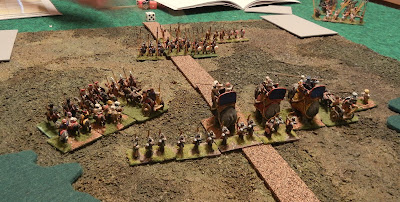 We then switched to an Imperial Alexandrian army versus some Persians. I got lucky and drove two of Bruce's cavalry stands of the board to secure my left flank and managed to avoid complete destruction on my right. Then my pike and elephant block finally engaged his spear and won the game for me.

Up next: I have some 28mm renaissance pike that are based and drying while I am working on some crossbow and shot units to join them. After that perhaps I'll start on this 1/72 Macedonian army. I'm closing in on 1900 figures painted and would be keen to top 2000 by year end.
at 6:46 AM