Happy birthday to me!

On my 41st birthday, a package from Tim in Saskatoon arrived, containing his end of our MJ4YJ (My Junk for Your Junk) trade and I couldn't be happier. It contains a lovely hodge-podge of 1/72 WW1 figures (mostly Emhar) which will fit right into my WW1 HiTT armies project. 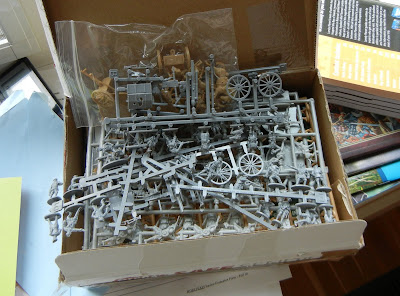 It looks like there are later war British and German troops as well as support weapons plus some artillery for both sides. What I need now are some cavalry units and a German tank plus I will build some special units (wire, gas clouds, etc).

There are also a bunch of 1/72 ancients in here and another box is on its way to complete our trade with some more/172 ancients. I expect I can create a DBA army out of this to auction off for the club. What a great birthday; thanks Tim!

Up next: My first 1/76 WW1 British troops are being based and a second, larger batch are being painted. A third batch lies waiting my attention. I also apparently have a 15mm cowboy commission en route but has not yet arrived. I'll slot that in at the top of the list when it gets here.
at 11:15 AM

Thanks Dale! It is hard to fathom I'm over 40 now. Until I go to run up the stairs and my knees begin complaining!

Thanks guys; it was indeed a happy birthday. I got new bread pans!