Last of WW1 British for awhile

I based the last of the WW1 British figures I will be doing for awhile. I still have a fair number to do but need a quick change of pace so I don't bog down. 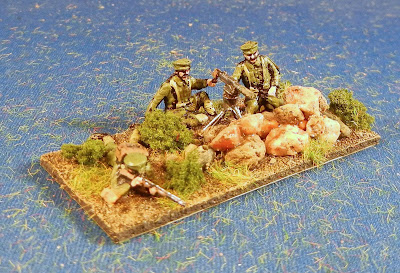 These are support bases for the 1/76 WW1 Airfix figures I have. There are three MG stands. Not bad models given they are 40 years old!

I also did one base of mortarmen. Most of the artillery in this army will comprise onboard artillery pieces or army-level artillery barrages (modeled with explosions--maybe steel wool?). 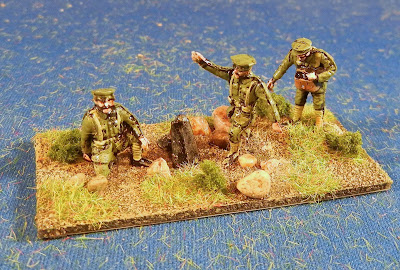 Up next: I am painting twelve 28mm Perry late medieval pike as early renaissance Germans. And I've build another 18 crossbow and shot troops that I will prime this evening.
at 8:56 AM

I like the top-most stand with the prone figure.

As for explosions, don't use steel wool - it will eventually rust and rot from moisture in the air. If you want to use a similar product use some poly filler for making pillows (get at fabric store) or some 'scuff pads' for cleaning stuff made of plastic.

Allan: Thanks kindly for the tip! Humidity is not a big issue here but that sounds like good advice nonetheless. I also understand steel wool is highly flammable!

These are really nice stands. Amazing that the classic Airfix still stand for gaming!