Bruce will be putting on an age of sail game at the club next Tuesday and we playtested it last night. The rules are a slightly modified version of man of War from 1983 and they play really well. 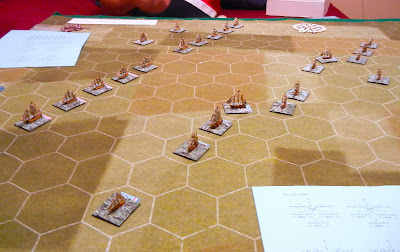 The battle was the first have of Chesapeake Bay from the AWI, where the French drove off the English which trapped a large army at Yorkton (I think). The British are on the left and the French are on the right in these pictures. The game opened with the lines moving into range. The French managed to get in front of the British which caused an interested curving towards the left of the battle. 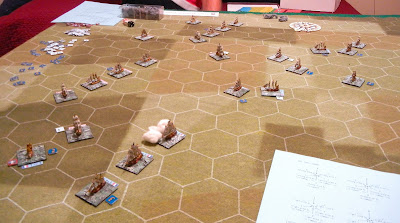 The battle then broke into two melees (foreground and aft). The foreground saw a British ship strike early which pretty much determined the outcome of that fight. In the aftground, the British lead ship is surrounded and fire poured down onto it. Alas, the French could not hit anything at the beginning of the game (nine shots and nothing hits!). This was a much more even fight where both sides were stuck in. 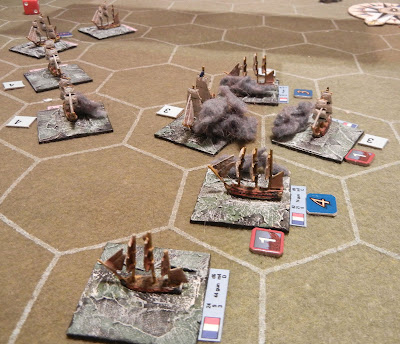 It looked like a French victory as the shooting dice swung the other way but the British fought back and a series of strikes late in the game gave the British a marginal victory. A good time and the game easily accommodates four players. 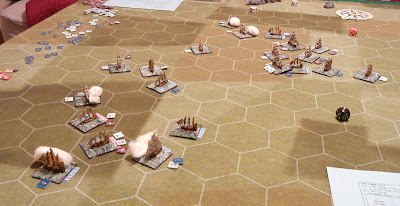 Up next: A bunch of WW1 Brits are in various stages of painting and basing for HiTT. I'll then need to look at this box of stuff Tim sent to see what should follow.
at 6:54 AM

Yes, these are Longdon or something like that. May 1/6000--note nearly as nice as the 1/2400 ones Bruce uses now but he needed more ships for the scenario than he had in the larger size.

Langton? I love the water effect!