I'm cleaning out my games room and have run across this 28mm HoTT army that I'm ready to sell. This is Black Peter's Christmas army; Black Peter is, according to my step-father, a Germanic version of Santa Claus who beats the hell out of bad kids instead of leaving them a lump of coal. That always struck me as a hilarious tradition thus we have Black Peter's army. 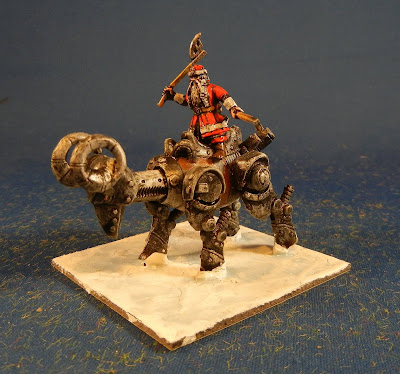 First up is Black Peter riding a steam-punk steed. Peter is a GW plastic miniature while the steed is a Heroclix figure. He could be a mounted hero or hero general in HoTT. 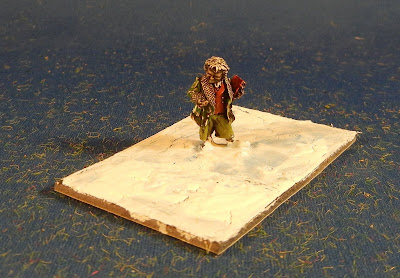 Every despot needs a right-hand man to tell him who has been naughty and who has been nice. This is a metal GW miniature and I would use him as a cleric or magician. The bases are white with blue shadows--the shadows didn't show up that well in the pictures. 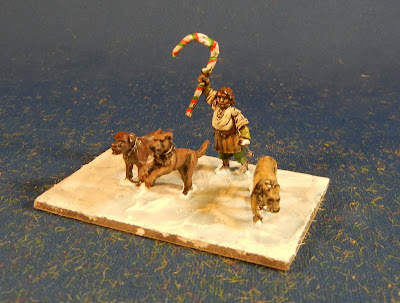 For base security, Santa employs a variety of dogs and a gameskeeper. These are GW metal miniatures and I would classify them as beasts. 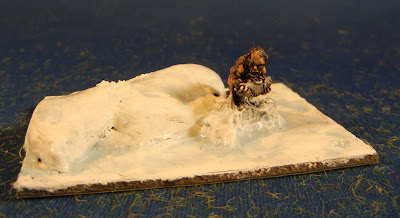 Lurking among the snow drifts is this savage creature. A GW metal that I would use as a lurker.

The bulk of the army are these five bases of elves. There are three shooters (snowballs), one blade and one that could be a blade or a shooter as well as (optionally) a general elements. A mix of GW metal and plastic.

To supplement the the elves are soulless hordes of snowmen raised by the magician from the frozen hellscape of the arctic. These could be hordes or spear. 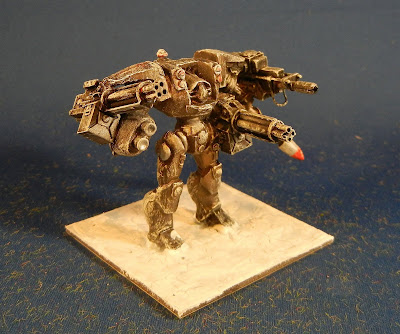 Finally, Santa's workshop does just turn out whorey Bratz dolls and Hot Wheels. This well armed fellow is a behemoth. A Heroclix figure with additional firepower added. Look out Walmart, Santa isn't going to let you muscle in on his turf.

I'd like $100 OBO. Shipping is roughly $20 in Canada or the US; I will refund anything under $20 and eat the cost of any additional postage. All bases are individually bubble-wrapped and boxed. Offers to bob.barnetson@shaw.ca.
at 10:22 AM

Wait you're not going to keep them to help bring down the galactic empire!?

Thanks Tim; the rebels don't need any more help; I believe the Empire is 0 and 2.

Thats a funny looking force, and the heroclix moutn looks pretty amazing, might have to scour their range me thinks ;)

This army is now sold!

SANTA IS COMING TO TOWN!

Lovely looking army, I must say I am very inspired by all your work over the 3 years. I'm amazed you have used so many different figures!