Duel in the Dark

Last night I dropped in on Bruce to try out the board game Duel in the Dark. This game allows two players to fight out the British night bomber attacks on German cities during the mid-war. 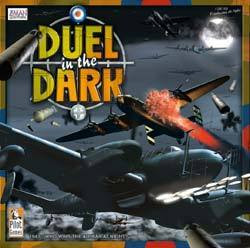 The components are all quite nice, with a lovely hexed game board. The basic mechanics are simple: you set up the table, the British player programs the bomber, the German player positions fighters, and the British player places his bomber and his mosquito squadron. Success is tracked on a victory point counter and all game encounters change the score (rather than tracking damage to planes and whatnot) 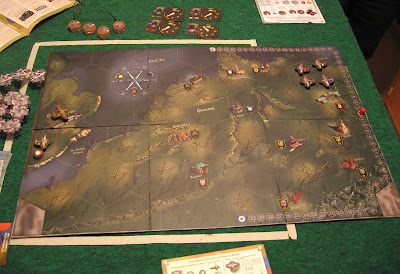 Each turn the mosquito moves. It can shoot up night fighters, take out defences or light up the target hex. It is most useful in trying to deceive the German about your bomber's intended target. Then the German fighter squadrons move, trying to anticipate where the bomber will be to shoot it up. Then the pre-programmed bomber move is carried out. 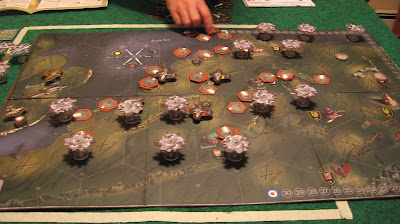 You play both the ingress and egress, trying to maximize your score for the night. The only tracking that is necessary is fighter squadron fuel (only four squadrons so not a chore). But there is a lot of depth to the tactical game--tough choices and opportunities to deceive and to take gambles. 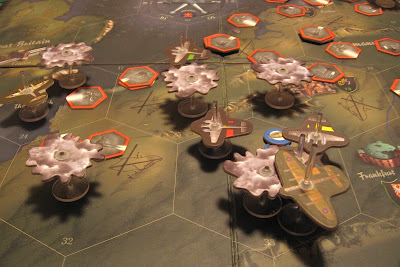 I managed to score a big victory in game 1 as the British because Bruce made high-stakes choices with his fighters at the end of the game and guessed wrong twice in a row (whew!). In game two, as the Germans, I eked out a marginal victory because I basically got lucky. The exciting part will be playing a campaign over several nights as each mission (due to the victory track) will have a relationship to the other so there is an opportunity for some meta-strategy. 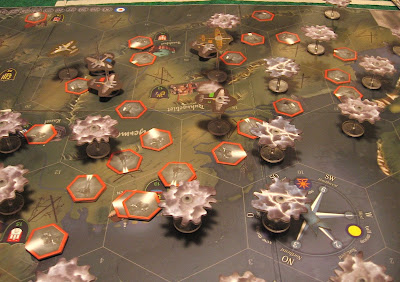 Up next: Still painting Trojans! I also have a few other projects on the go but I am hopeful to be done the Trojans this weekend. Focus on the Trojans!
at 9:29 AM

Now that would be cool with some miniatures!

It was actually pretty cool even without the minis. The paper planes allow you to indicate flight height which would increase the cost of miniaturization. But yes, cool minis are nice! I quite liked the campaign aspect.