A couple of years back, I picked up a bunch of 15mm pirates at the club. After mulling them for several years, I saw a post on www.fanaticus.org that inspired me to base them as a HoTT army. So I touched up a bit of paint, gave them a dip and based them. 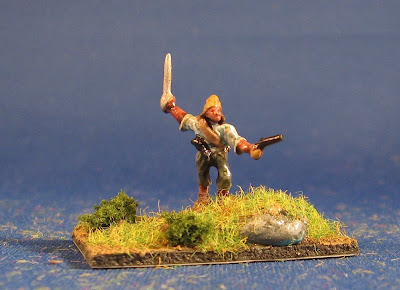 This scurvy band is lead by a hero general posed astride a rocky outcropping. Don't let the short pants fool you--he is a nasty customer.

His personal guard entails two bases of 3Bd (or 3Wb, your choice). The middle fellow on the left-hand stand is named Mike.

There are also three bases of 3Sh (or 3Wb). While pirates are rumoured to be brave, these fellows know the value of a good ambush. Shooters are particularly deadly in HoTT when hidden in woods and these fellows should keep Her Majesty's Royal Marines (or whatever you want to pit against them) occupied.

The bulk of the army is looted cannon--the anvil against which to smash the enemy. The one two-cannon base could be broken up into two smaller shooter bases. Finally there is a camp (inspired by Miros) with the captain recovering (or burying) a treasure chest on a tropical island by torch-light. 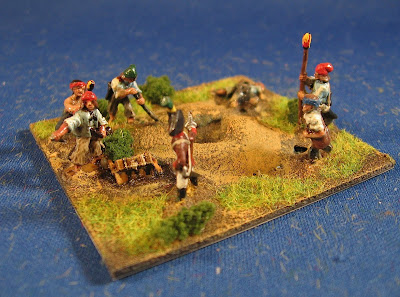 Up next: I have some 1/72 AWI guys underway but they likely won't be finished until January. I am also rebasing some 1/72 War of 1812 fellows (found the Indians!) for DBx. And then there is a 15mm early imperial Roman DBA army that I have just assembled and primed and more boxes of 1/72 and some 28mm dark ages to do. Plus I have two games of DBA/HoTT scheduled in the next two day. A nice way to end the year.
at 7:54 AM

Sorry the pictures are blurry--a new camera is on my boxing week to do list.

Thanks Jason; not as good as your pirates, though!