Dave dropped by this afternoon for a playdate for the girls and some HoTT action. This was his chance to get his 28mm Scot ECW army into action. I brought out my skeletons. If a back story was necessary, I imagine Dave's sheep lovin' Scots (immortalized in Bonney Jovi's "(La-a-a-a-ay you down in a) Bed of Heather") sought to better their lives by trouncing their peace-loving undead neighbours. 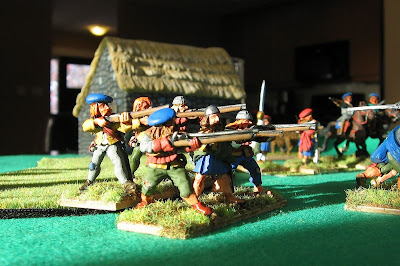 Game one saw Dave completely outplay me. Here are some Foundry shooters on their way to annoy the hell out of my right flank. 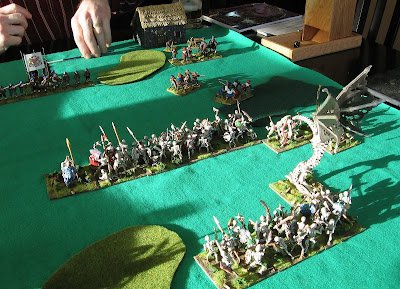 I pushed my hordes forward (and they truly are a horde, with seven 1AP stands). The winged creature is a flyer. 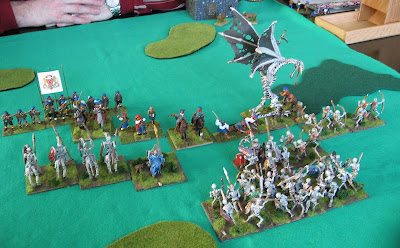 At this point, I'm in some difficulty with my flyer about to get greased and left flank if looking a bit over extended. 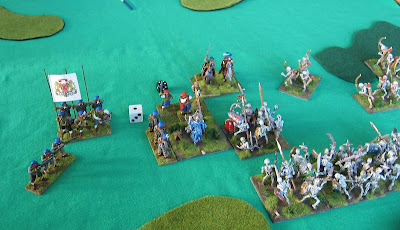 And here is a shot of the general kill for the win. I would take note of this tactic and use it later. 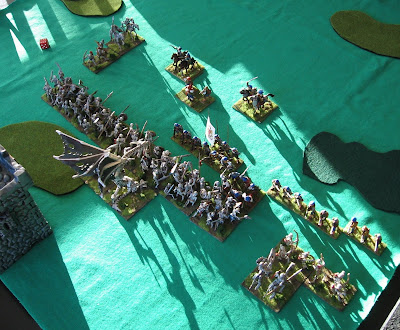 I set up the terrain for game two and went with a slightly more open field and long line of battle. Dave chose to focus on my right flank, coming in hard with shooters and warband. I worked some knights around the left side. 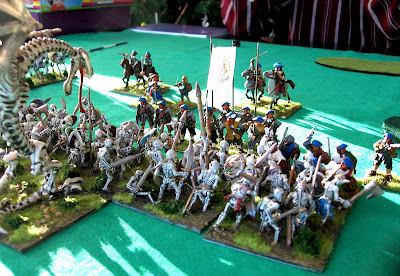 The lines collide and my horde starts to disintegrate. Fortunately, it can regenerate and I didn't lack of pips in the game. In the meantime, the knight teamed up with my flyer to bag first a rider unit and then Dave's general. At which point I cheesily regenerated two horde and used the flyer to close the door one of his warband for the win. The flyer was worth its weight in gold in this game! 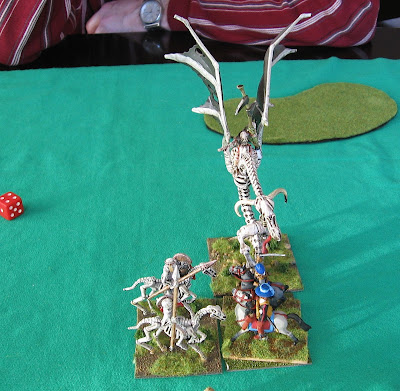 Up next: I have some AWI army starting to finish up as well as a bunch of rebased Indians for my AWI and War of 1812 projects. There are also some 15mm Romans underway.
at 2:06 PM

Bob - enjoyable report as ever.

Must give HoTT a try. My next door neighbour is always saying how much fun it is!

Thanks. Yes, it is fun. Some trickier rules--shooters in the woods are a pain in the behind to have a fire-fight with.