Bruce dropped by yesterday and we tried out 1960: The Making of the President. This card-drive political game allows you to refight the Nixon v Kennedy campaign. 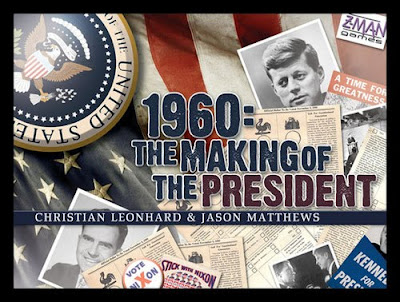 Overall, this was a very good game and took about two hours for us to fumble through our first game with only a few mistakes. At the beginning of the game each player starts with support in some states while other states are open. Cards can be played to put down support, eventually locking up states and their electoral votes, as events (which are often difficult choices) or to influence things like media support of control of the issues. 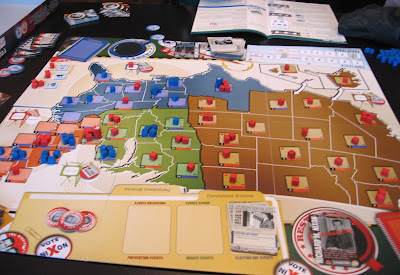 The map (above) is quite lovely as are the components. Each turn entails playing five cards and then putting a sixth in your "debate" hand where you play out the televised debate. There are also ways to make events happen even if the other player uses the card to place control markers. Overall, there were lots of strategic options as well as some sense of campaign tactics. 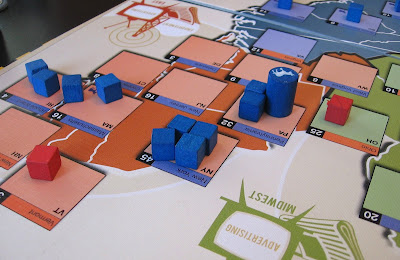 In the end, Nixon managed to squeak out a win by focusing in the last two turns on the swing state of New York, having locked up Texas and California quite early. Lucky cards helped here. I quite enjoyed myself despite playing tricky Dick. 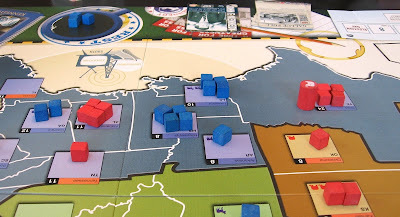 Up next: Yes, Trojans. Also some 28mm Celts have dragged themselves out of the paint pile for assembly. And perhaps a game of Duel After Dark (UK bomber offensive in WW2) on Tuesday.
at 10:01 AM

By your describing the game it sounded like it has a lot in common with Twilight Struggle then I noticed that Jason Matthews is a designer on both games. Looks like yet another hit for Z-Man Games and I might have to give that one a try.

Obscure, but very interesting subject for a game! And the components look great.