I finished a small army of Trojans (DBA army I/26a and b) this afternoon. Upon basing, its appears I came up one 4Bd unit short but that can be made up later. This was a commission so the manufacturers are a bit of a mystery but I'd guess Old Glory and Black Hat. 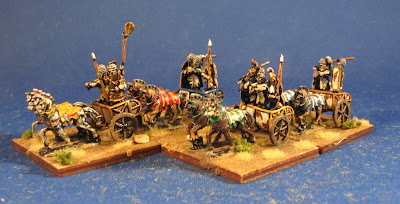 First up are four chariots, the General's chariot being on the far left. Returning viewers will notice the basing scheme is more arid than my usual approach. This was a request--I'm not sure I got it quite right although I think these look fine in person.

There are also six 4Sp units. They look a bit uniform (cow hide shields and all) but the tunics and whatnot are quite varied--again, a request.

And here are three (of the four required) 4Bd units, including the optional foot general (centre).

These fellows are two 4Wb bases. They are quite a lot chunkier than the rest of the figures and were a tricky to get balanced enough they would sit on a painting stick! Strange but true. 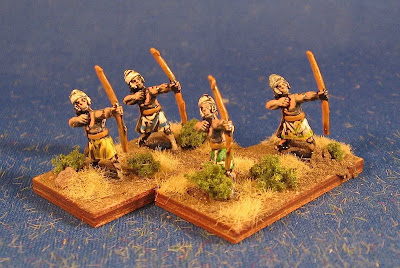 These are two 2Ps units. It appears I forgot to snap a picture of the 3Ax unit, but they are also done. 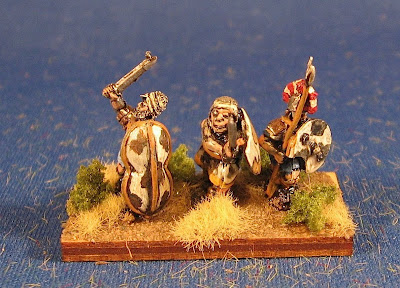 I believe these fellows are 3Bd. I almost never see a 3Bd unit (maybe in a viking army I have?). Here you can see the thicker figure juxataposed against the thinner (Old Glory?) figures.

These are the two 4Pk bases. This picture is not that great but had an interesting composition. 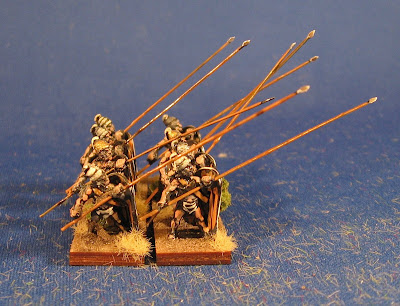 This one shows off the pike figures a bit better. The pikes are bristles off a toilet brush (Dale swears he did not recycle!) and are quite flexible. Dale kindly cut off and drilled out the hands before shipping. And, of course, we have the camp. I believe the horse is Black Hat Miniatures; ditto the figures. 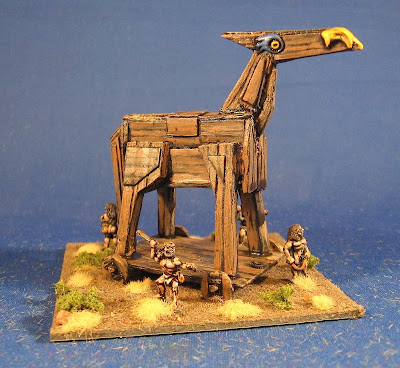 Up next: I have one more DBA army to get to in the next few weeks. And I have entered into the TTGN Old Project Challenge where I will finish up a lingering project by February (hopefully by New Years): a 28mm Gallic DBA army. And I have been banging off a few units of hobbits while I putter.

I also see this in my 200th blog posting and I have crested the magical 2000 figures painted this year mark. Despite a lot of commission work, I have also made a major dent in my own pile of unpainted lead, which is encouraging. Getting the Gallics done over the holidays would be a real boon as well!
at 2:09 PM

Yeah, a nice model to be sure. The casting was a bit rough and it required some carving to fit it together but nothing too terrible. Blessed is the gel crazy glue and the gaps which it fills.

Those pikes look great. How did you get the spearheads on them? I was tempted to try something like that, but didn't see how I could get decent spearheads on bristles.

The toilet brush Dale cut the spears off of had the "spearhead" attached; it is the scrubbing surface.

I have, on metal and plastic, used a blob of silver paint to create the bulge of the head and then left a ring of black primer around the bottom of the spear head as shadow but it is not as nice of an effect.

They look great. Dale should market those bristles. I reckon they'd sell well!

Actually the pike heads are made. I take the bristle, flatten the head with a pair of needle-nose pliers, then take a pair of very sharp scissors (small, used for scrapbooking) to cut the point. I do this under a magnifier so I can see it all.

That's why making spears, pikes, etc. takes some time (for me). I get tired bending over looking through the magnifier. :-)