I'm just about finished some AWI chaps (just need to get based!) but in the meantime I finished rebasing a bunch of US militia for my War of 1812 army.

These figures are old Airfix US ACW Confederates in various floppy hats. I think I picked these up at a club auction early last year.

Four bases are done as firing lines with a wide variety of colours--true militia. I painted these in the spring and just rebased them to 60mm DBHx standard.

I then did two bases in generic brown with black hats. Perhaps a slightly more organized unit from the south where some gentlemen sprung for uniforms. 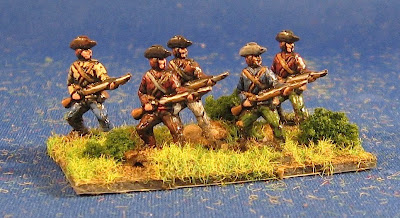 The final two bases are advancing militia. What I'm struck by is the details that can be brought out from sculpts done in the mid-1960s. The picture below shows that best, I think. Yes, they are not lovely like Perry sculpts, but the cost of 1/72 makes it possible to enter periods at a very low cost. 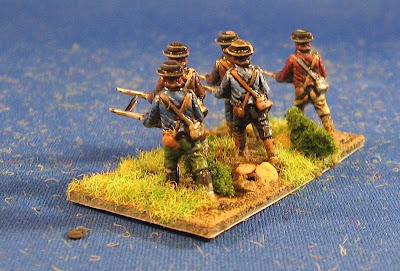 Up next: I have two AWI armies (foot and artillery) underway and should have something to post tomorrow (my first painting for 2011). I also have a 15mm EIR DBA army that will follow. Then perhaps the AWI cavalry. Thereafter, things are more open. I have a box of proper US 1812 troops to do but I would like to wait until I have better source material (en route). I'm also mulling a MayDay game and may need to source a few more skeletons for an undead Teutoburg Forest redux. And the club is Tuesday night.
at 10:50 AM

Are you interested in discussing an article on your War of 1812 efforts for publication in our Journal of the War of 1812. If so, email me at the1812archive@gmail.com. Thanks, Hal Youmans