Mark dropped by this morning making a delivery of some new figures and brought along his dreaded Kushite army (I/58). I've only fought these guys once and was thoroughly trounced. I hauled out my Sub-Roman British (II/81d). Both were aggression 1 and I rolled high so was the attacker in game one.

Above you can see the armies about to hit. I almost decided to try to end-run his line with my 2Lh and try for his camp but then decided the horse was more useful on the side to close the door on his bow and distract him.

Then the lines hit and I rolled three 1s for pips in four turns while Mark rolled average to good. What a bloody mess! We were tied at three.

I tried to force a recoil on his stacked spear which would have won me the game but was unable to make that go and he eventually crushed me 5-3. Arrgh!! 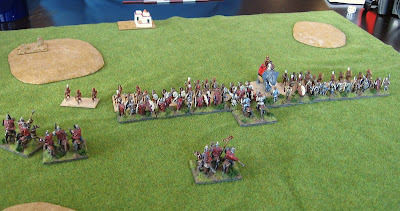 We played a rematch and I was again the attacker. I adopted a similar strategy but instead of letting him impact me, I jumped forward a smashed into him, bagging a 3Bw with my 4Sp on the right and forcing his left flank backwards.

He had more success on his right my left). Then his Elephant General went toe-to-toe with my 2Ps. I was hoping for a flee result so I could bag him with the 2Lh. But I managed a 5-1 kill on the general and won 2G-0! 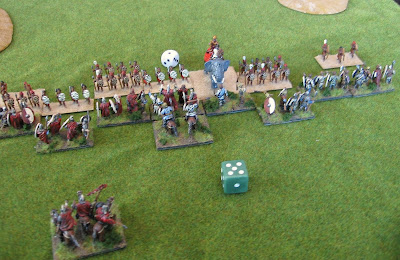 Up next: Some 1/72 AWI and some 15mm Romans are underway. And I hope to get my HoTT skeletons out tomorrow for some action. Mark also dropped by a bunch of 28mm dark ages kits.
at 12:03 PM

As the old saying goes, "fortune favours the bold!"

It was a great time and your wife buys mighty fine coffee!