I'm pushing hard to complete a stalled 28mm Celt/Gallic DBA army project that I started last Christmas. It is part of the TTGN Old Project Challenge. I made quite a lot of progress this week.

First up were six bases of 3Wb. These came out pretty well, showing the diversity of the Celts in colour and weaponry. I came up one shield short in the end so I will need to paint one up and glue it on later. These are all Wargames Factory plastic Celts. 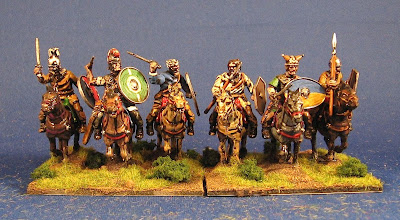 I finished two bases of 3Cv horsemen. These fellows look a bit rag-tag, which was my intention. The fellow in the middle on the left has obviously captured a fair but of Roman equipment. 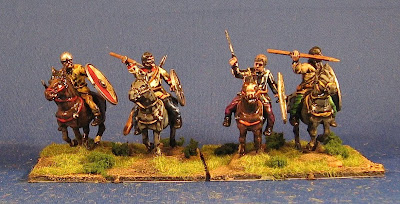 These two bases of 2LH are supposed to be skirmishing horse units. I took the saddles off of these horses so the riders were bare-backing-it.

These two units of 2Ps have a fair collection of ranged weapons, including a bow and a sling. And finally I finished a HoTT cleric or magician element. He is a 28mm metal from Warlord Games. The standing stone behind him was "sculpted" on the fly out of blue tack. 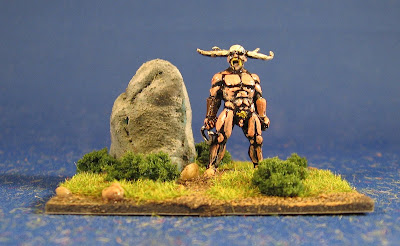 Up next: I have the flesh done on a 15mm Etruscan DBA army so I will try to bring them to completion this week. I also have the last Celtic chariot coming to me in the mail and Dave and I did a large trade this week that I will need to sort out. I also have a holiday themed 28mm HoTT army to base up (suggestions of snow terrain welcomed).
at 9:04 AM

Last Xmas I bought a bag of 24 or so fir trees with snow on them from Canadian Tire. The whole bag was reasonably cheap. It was in the Xmas diorama section with the little houses.