Duel in the Dark Campaign

With holiday planning well under control, I dropped in on Bruce for a three-game campaign of Duel in the Dark. This recreates the British bomber offensive of 1943ish. The idea is the British gain points (by bombing targets) while the Germans take points away (by inflicting damage on the British bomber unit). All very abstract but there are some difficult choices for both sides. If either side moves the points marker to 30-points on their side, they win. 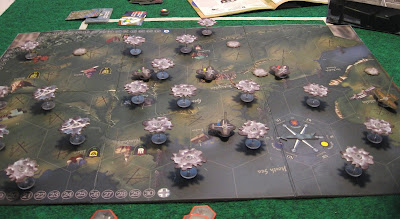 It was a dark and stormy night and Bruce (playing the British) opened with a mid-range attack into the very western portion of Germany. Overall, he managed to come out up 3 points. In the meantime, I was studying what combinations of ground supports worked best. This helped contain the gains he could make on later turns 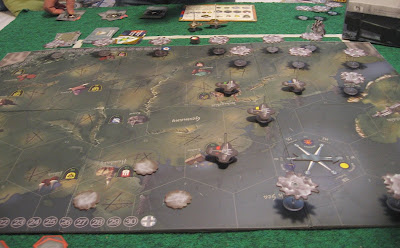 Turn two saw an open sky and Bruce drove deep, bombing Berlin (!!!) for a whopping 30-point gain. Fortunately, my squadrons haunted him all of the way back to London, reducing his gain to a net zero.

On turn 3, Bruce went south, got in cheaply but paid on his return trip. I think we ended either at zero or 1 point for the Germans. We managed all three turns in two hours with a fair bit of show and tell in between. It would be hard to win at this game given how tightly balanced it is. It is almost chess-like in the absence of randomness. Bruce also hauled out the expansion which allows four German players to compete as a team against the British player and also against each other. That would be a good game at the club one night. 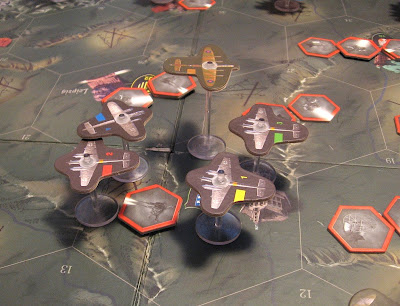 While we were setting things up, Bruce showed off some more 15mm sci-fi stuff, including this giant lizard grav tank and a bunch of infantry (not shown). Should be an interesting game at the club on Tuesday. 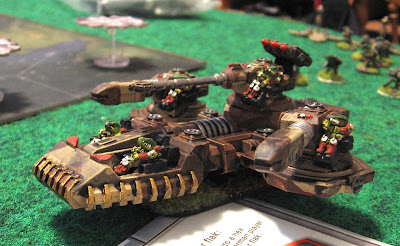 Up next: I have a 15mm Etruscan DBA army drying and it should be ready for tomorrow. And I have a 1/72-scale British AWI army for DBHx on the paint table. if I can keep motivated, I will do the matching American army over the holidays. Just need some cavalry from Mark. There is also the last club night of the year on Tuesday.
at 4:12 PM

I believe the tank is a Garn Crocodile class Superheavy Assault Tank from Khurasan Miniatures Garn line. Nice paint job on it too. Looking forward to seeing what else Bruce got.

Some sweet stuff. Yes, Khurasan. I'd say there is enough here for a spring time full of sci-fi gaming.