While I continue painting some 1/72 AWI figures, I thought I'd rebase the 1/72-scale Indians I had painted last spring so they were compatible with DBHx. These are Italeri Indian Warriors that a local hobby shop was clearing out.

I've based these on 60mm frontages and have created 11 bases of 4Wb and one base of 2Ps. They mostly survived the rebasing although a few shed paint at the ankles from the twisting a prying. 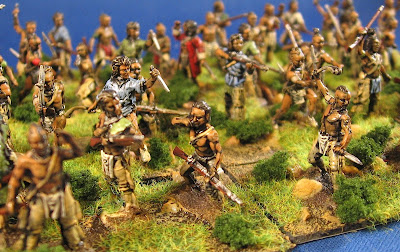 Italeri makes some nice figures although their boxes often contain many multiples. In this case there were 16 poses, each repeated three times. For little effort and only about $8, I think I got a decent result.

I see I also ended up with a full DBHx army of Indians which I suppose allows some interesting asymmetrical scenarios. Mostly I figured these would fight on the British side in the AWI and War of 1812. There are probably too few muskets and too little western clothing for them to be proper War of 1812 tribes. But this will have to do--I'm not buying a bunch of boxes just to get a few more guys in top hats! Doing the War of 1812 will be tricky enough as it is.

Up next: Some American militia for the War of 1812 are being based. And I'm working away on both British and American AWI foot plus artillery and some dragoons for the Americans. And then I'll turn my attention to some British cavalry/dragoons. Plus I'm off to Bruce's this afternoon for a game!
at 9:20 AM

These are excellent models. It's nice to see them painted. I just bought my box last month. I'm planning a woodland Indian DBA army.

Ah, nice idea! There are enough boxes of North American indians that I think one could do a couple of armies, although they would not be in the same period.

Impetus no longer rings your bell? Why the change in basing?

DBHx has everything Impetus has but with more potential opponents and half the painting. Plus I only have to remember one set of mechanics. I thought I'd spend my time developing scenarios and painting.