Awhile back, I traded Dave something or other for some plastic 28mm medievals that used to be produced by Zvezda for their Ring to Rule fantasy game. I was looking for some foot to complement some GW Bretonnians I had impulse bought on eBay. I put together two bases this weekend and painted them. 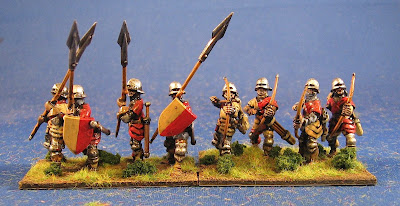 The box comes with 20 guys (basically 10 foot and 10 missile) but you can customize them somewhat. The foot can be spear or halberd and if you want 10 of each and no missile troops, you can do that. You can also make 10 long bow or 10 cross bow or make 20 missile troops and forgo the foot entirely. You can also make up a swordsmen army if you prefer. 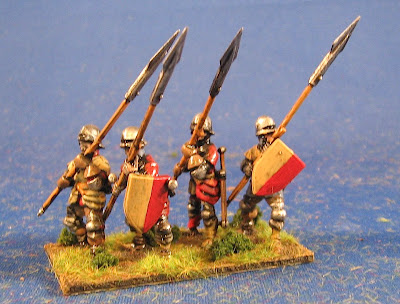 Overall, they went together nicely. The spears were a bit finicky. Basically there is one set of hands and half of the shaft (single piece). Then you pick spear or halberd, cut the appropriate head piece out and attach it to the hands/shaft piece. The trick is mating the two shaft pieces together firmly and straight. The glueing surface is about half a mmm by 1mm (sort of a shelf cut out of the shaft on each side). This was
at 9:39 AM