I have completed painting up all of the skeletons I acquired this summer and have parted the results into two Hordes of the Things armies: one I'm keeping and one I'm selling. This is the army for sale. It comprises 9 bases of foot (30 figures) and 5 bases of mounted/flyers (8 figures) and comes in at 30 AP. 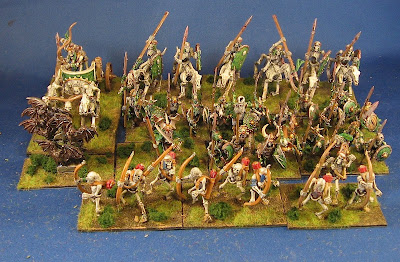 First up are three bases of riders. These give the army some mobility and are one of the better units in HoTT. These are GW plastics (tomb kings, I think) with 60mm frontages.

The army also includes a chariot. This could be played as a rider general or as a knight--I think the latter is a better for for the model. Again, a GW tomb king model. 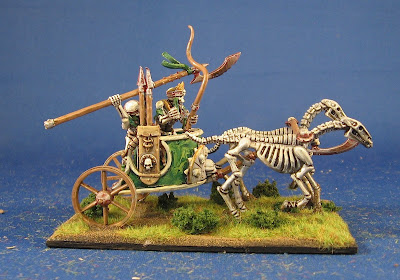 The army also has three shooter bases of archers. This creates a good rough-going group and also gives good protection against other mounted units (unless you roll ones...).

The core of the army are five bases of blades (could also be spear or hordes, depending on your desires). These are GW vampire counts and are sweet models.

I have includes a close up to show off some of the detail. 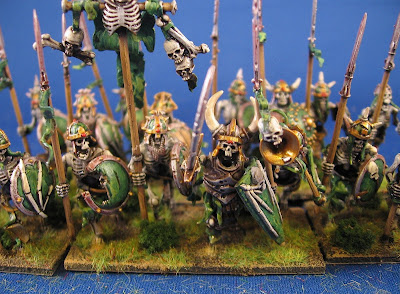 Every skeletal army needs a lich and we have a hero, cleric, or magician (your choice). this is a vampire count with a custom-made staff (jeweled) and cloak (putty). 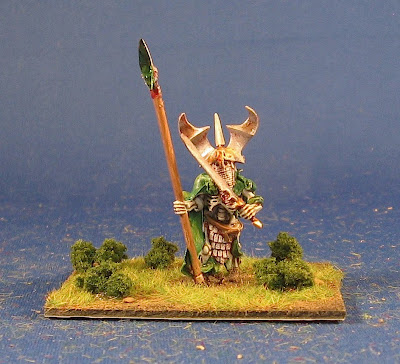 Finally, there is a unit of bats as flyers. This is a metal Reaper model. 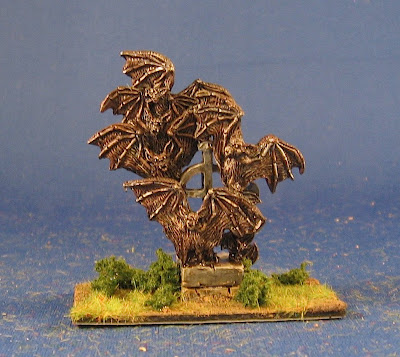 these are from a smoke- and pet-free home if that is a concern for you and have been painted by me with acrylics and sealed with floor wax. They will be shipped with each base bubble wrapped and floated in peanuts. I'm asking $100 OBO plus $20 shipping in Canada or the US. Offers to bob.barnetson@shaw.ca

Up next: A coiuple of commissions are en route but in the meantime, I have made a start on some littoral terrain (maybe I'll do a tutorial) as well as a 15mm late Roman DBA army that I found in a drawer. Perhaqps some stock taking is in order? I also have some 28mm plastic medievals that I am basing.
at 11:44 AM

Thanks Scott; yes dipping rocks. Wall is now selling army painter which might be a bit less messy. Yet I have become somewhat enamored of my hands smelling of pine... !

I'll stick with the Future as it's quite a bit cheaper. Wow, did that sell quick!

Yes, Future is the right price! And yes, it did go fast. Nice to see I got the pricing right on this one. And have a bit of shelf space for my next units. Must get back to working on some Celts, But I also have some legionnaires to finish off a camp so maybe those first.