I got distracted today by some 28mm late medieval figures (old Zvezda Ring to Rule fantasy figures) this afternoon. But I did manage to mostly complete a 28mm Roman camp for my DBA/HoTT Marian Romans. This is my first large-scale modeling project and I'm learning a lot as I go. 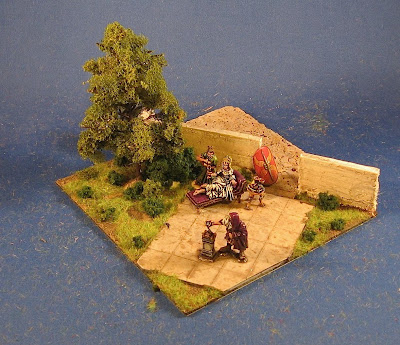 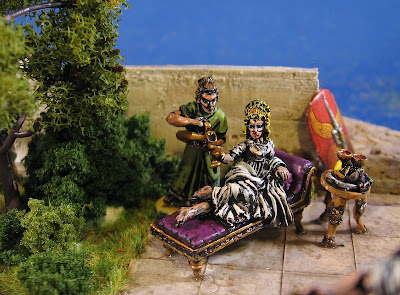 These were nice but a bit smaller than the Wargames Factory Romans I'm using for units. Not sure what is going on with the fellow's face below--some sort of reflection obscuring the details, I think. 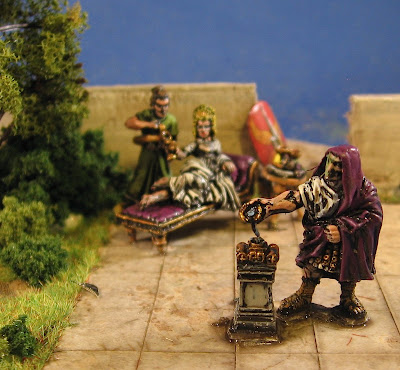 Where I'm having some difficulty is what to do with the patio section behind the figures. I'm of two minds. The first is to clutter it with gear (rolled tents, shields, spears, crates, etc). The other idea I have is to populate it with Romans awaiting the results of the auguring. Suggestions anyone? 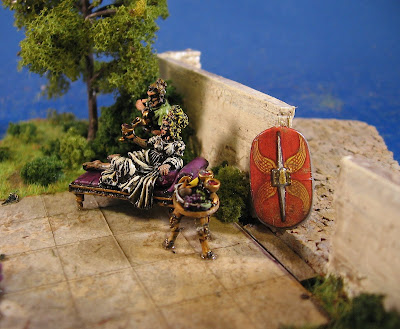 Up next: Two bases of late medieval foot (bow and spear) need to be dipped then based. And I have 20 skeletons painted and 20 primered. I'd like to create a mixed unit so I will hold of basing them. I also need to get my AWI game together for the club on Tuesday.
at 6:44 PM

Really nice. Behind the wall I'd stick a handful of legionaires mulling around waiting, or maybe a mounted trooper holding the reins of an extra horse for the augerer.

Yeah, I'm inclined to put figures as well. Not sure how the WG.WF size incompatibility will work out. Maybe some of the WG Legionnaire's Justin has will work.

Have you added any figures to this yet? I ask because I'm about to get some WG slingers to add to my WF Imperial Romans and if there's a size incompatibility I'd like to see some pictures!