Bruce dropped in for a game yesterday. We decided to give our armies for an upcoming campaign a workout to see how they performed. I pulled out Leidang Vikings (III/41c) and an Anglo-Dane army (III/71) for Bruce. The Anglo-Danes were mostly Museum Miniatures with the general stand below having an Essex horseman and Irregular priest i. Basically a lot of spear stiffened with some blade. 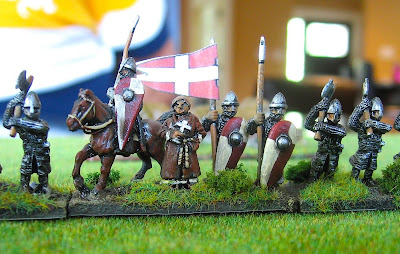 The dark ages is all about the shieldwall and our two games were no exception. In game one, the Viking (almost all blade) advanced and managed to get a flank turned (on the right) before the Anglo-Danes to reciprocate (on the left). Things were dodgey for a moment (you can see Bruce's six!).

But then Bruce rolled a one and the Viking's slight advantage in combat began to tell. This game went 5-2 for the Vikings, although it was closer than the score would suggest.

In game two, we decided to try a river which, in the end, turned out to be paltry and of no real importance. I refused a flank to see how that worked. 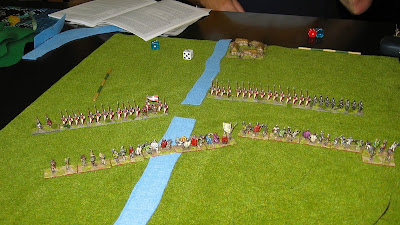 Not so well, as it turned out and Bruce came close to rolling up my left side and winning. Fortunately I hung tough, managed to close the door on the other flank and squeaked out a 5-4 win. This was as close as the score suggests. 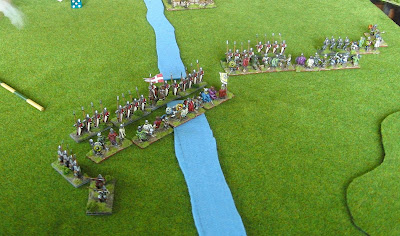 Overall, good games without much finesse. I would like to try out the Vikings vs Normans to see how they do but these boys are off to take a bath and get rebased for the campaign. I also need to create some littoral terrain.

Up next: 28mm medievals are based and ready to go while some 15mm AWI guys are painted and will be based tomorrow. Then onto some 15mm dwarves followed by I don't know what. Liking the viking rebase and terrain I need to do.
at 8:03 AM

The Vikings will probably have their asses handed to them by the Normans... Over half the Norman army can quick-kill any stand in the viking army... Oh, and they fight at (I think - can't find my book right now) even odds. Best hope for them is to defend and throw out LOTS of bad going!

Yeah, that was certainly my experience a couple of years ago when I played Saxons against Normans--only hope is to narrow the frontage via terrain placement (ergo a low aggression is good), look for any gains possible on overlaps, rear support or drawing them into bad going. The quick-kill does a nice job modeling the charge effect but sucks to be the recipient of it!