I based up some of the skeletons I have been painting these past few weeks. I've come to like the idea (if not the reality) of hordes in HoTT and skeletons seems like the perfect hordes army--anything to bring back some stands foolishly lost, I guess. So, 50 some skeletons later, I have seven bases.

There are a couple of different versions of GW skeletons here. Some tomb kings, some vampire counts, some very old (and slightly smaller) skeletons and then some I simply cannot identify. These have been trades from a variety of gamers (thanks to Scott and Tim especially). 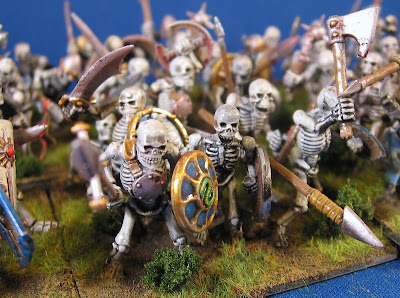 I did a couple of bases with a few guys half-emerged from the ground to reflect the fact they will all be reincarnated a lot under my command. 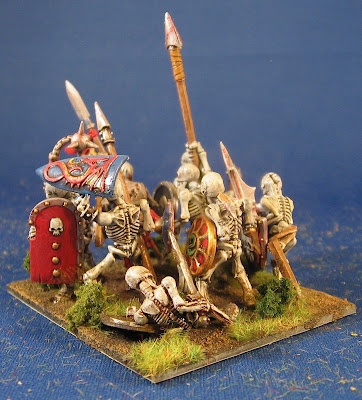 I also did a magician. He started out as a vampire count. I then added a cloak and green-gemed staff. The, I built up a lectern out of skulls and blue stick-em and then added the book (vinyl floor tile). I'm pretty happy with him. 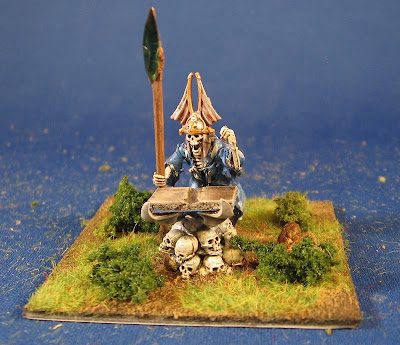 I also did a base of lurkers. I picture the guy on the right yelling (in a Mr. T voice) "Sue-prise suckas!" 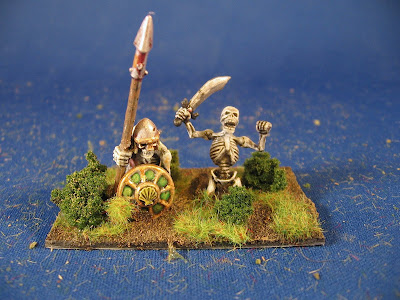 Up next: Some skeleton cavalry and shooters (the last of these guys, I think) and some medieval knights. Then some more medieval foot.
at 8:01 AM

I love the lurkers popping out of the ground! I've used the spare heads and arms to make bases/stands of guys clawing their way out of the ground before, but hand't thought of making a stand of lurkers doing that. Brilliant! I may have to steal that idea.

Very nice. The mage is awesome!

Thanks guys; I was very happy with how these guys turned out in the end--not always my experience! Back to medievals shortly. Painted six knights today so I'll base those tomorrow night.

Bob,
Love the skeletons and all the cool character you've added to the bases. Very inspirational!

Thanks. Should have done some sort of standing stone behind the magician (in hindsight). Oh well!

Excellent job on the skeletons

I love 'em! How deep did you make the bases? 60mm?
Regards
derFigurenschieber