Although the deal fell through, I completed a skeleton chariot for a HoTT army on Tuesday and the basing finally dried enough to photograph it! 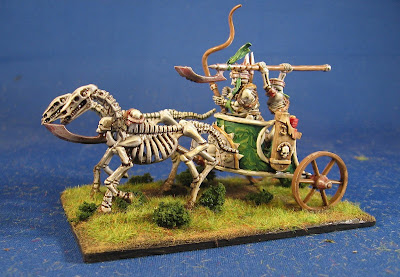 I have two more of these, a bunch of cavalry and several bases of hordes and shooters left-should be enough to field two armies in the end. I'd have more done but we spent this morning celebrating Canada Day at the Legislature and then picking strawberries for jam-making this evening. 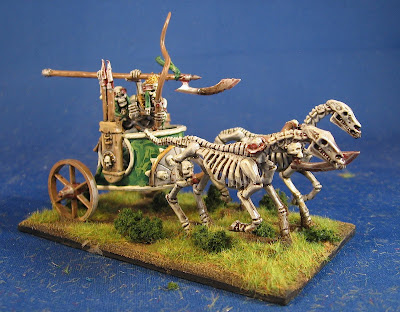 Just rolling off the workbench are another 20 28mm dwarves (spear and heroes) and 24 15mm AWI guys. Just need the dip to dry and then I can get the basing done.

Up next: The remainder of the dwarven cavalry, a cannon and some shooters. Thereafter, probably some 28mm goblins and some another batch of 15mm AWI (over the mountain men and some more loyalists). There is also club onTuesday and I was thinking about bringing out Pandemic for a play.
at 12:54 PM

Dude! You are a machine!!