I have for sale a painted 38-AP 15mm HoTT Orc army. It comprises 16 bases, 9 mounted figures and 40 foot. All of the figures have been hand painted by me and come from a smoke/pet-free home. I'd like $65 (which includes postage in Canada or the US) for the army. I'd also do a part-trade for some 28mm GW High Elves. 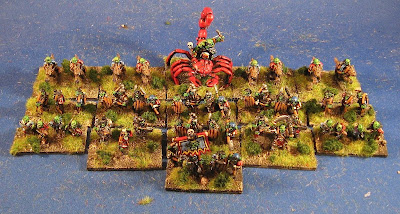 First up are four bases of Warg Riders. These fellows have striped shirts and I painted the Warg's teeth (not sure if that shows in the picture). All of the flesh on all of the figures has also had a highlight done.

There are also two bases of shooters and two bases of goblins. The goblins could be warband or lurkers, depending on your mood.

The core of the army are five bases of Orcs. I'd play these as Warband or spear. This also includes a general element with banner. It is hard to tell from the front-on picture but I have given these guys fairly bright clothes (perhaps Sauron was in a jokey mood that day?). The idea was to make them bright and gaudy rather than drab and dreary.

There is one base each of magician and hero, each of which would also do for a general.

Finally, there is a fellow riding a scorpion as a behemoth. This is a nice model from Reaper. 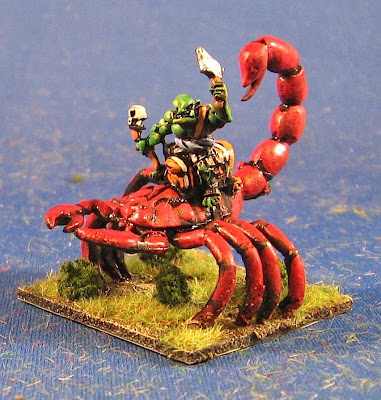