I finished up the last of my dwarf HoTT army last night with some shooters and the cannon. I might look to add a behemoth if I run across one but there is over 50 APs of troops here so enough to run almost any combination I'd like or to have a double-sized game. I also think a cool mechanical flyer might be interesting (or a balloon that can drop rocks?). I'll have to think about that. 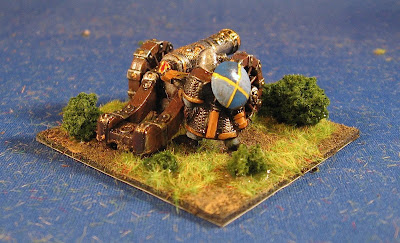 First up is the cannon (from Battle Master). I added in a (poorly) converted dwarf as a crewman. If I find another suitable dwarf I will add him as well (can anyone spare a suitable dwarf?). The cannon had lots of detail that drybrushed very nicely. 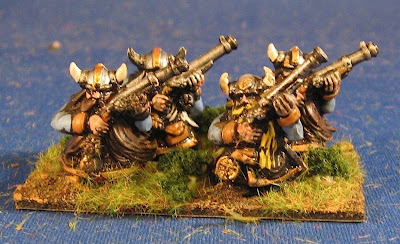 I also did a base of hand gunners (GW figure, I'm pretty sure). Not sure why they are so blurry. 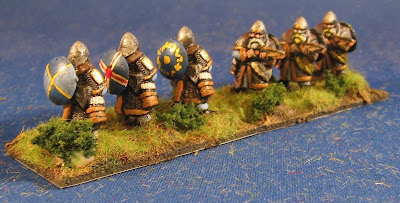 There are also three bases of crossbowmen as shooters. 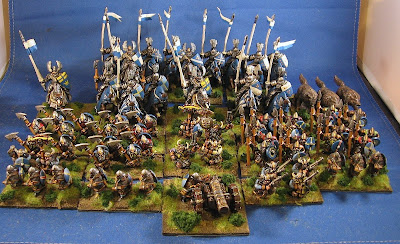 And then here is the war host fully arrayed. 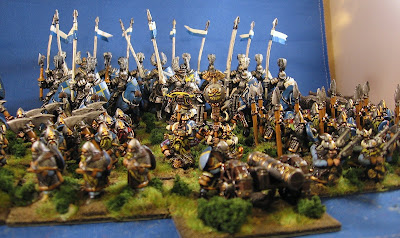 And a different shot showing off the standards.

Up next: I dipped 24 AWI foot yesterday and will hopefully base them up tonight. I also have a flyer for the skeleton army completed. And I converted some extra Roman cavalry into centaurs (which was way easier than I thought it would be--gotta love plastics). And a trip to the Tyrell is also coming up--perhaps I will find my behemoth there?
at 7:37 AM

Bob, did you get a dwarf cannon crew? I can send you one (from the battle of skull pass starter set, he's the one holding a cannonball, very "crew" looking), just let me know at joshuadc1975 @ yahoo.com