Well, I guess the elves had better get on some ships and sail west as the time of human has come. Dave came over yesterday for some HoTT gaming and brought his Arthurians. I gave the elven army I sold a quick playtest before shipping it. What a debacle! 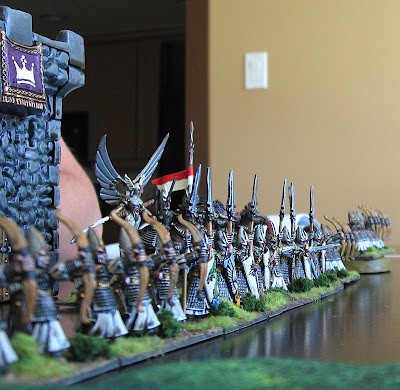 Game 1 was won with superior generalship by Dave. Good match-ups on his part--dang his general was a good unit! 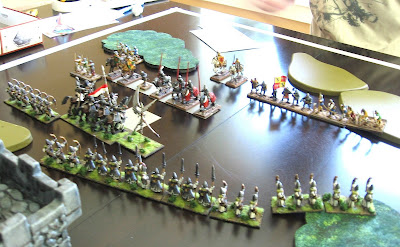 Eventually he killed my general and that was game. 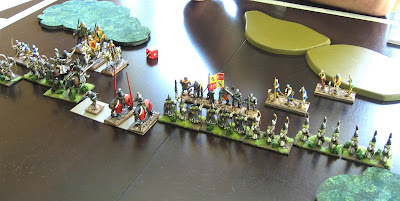 Game two saw dice betray me again against superior tactics. but I learned something important about the value of bow in woods!

Then I rolled five one's in a row and lost five freaking' units (the entire centre of my line)! 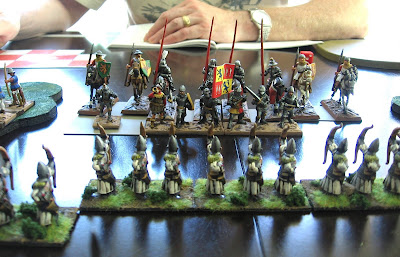 I managed to hold out longer than I thought but what can you do when you are one unit away from destruction? Good lessons, though.

Up next: 15mm Goblins are just about painted and then on to skeletons and perhaps more elves (depending on what the postal carrier brings today).
at 6:25 AM

I can confirm that Bob's dice were just hideous, they deserve decimation in the Roman sense (dicemation?).

Footnote, the shooter in the woods lesson is a painful one first time, don't duel them with shooters in the open (shooters in woods get +2 when shot at). HOTT is different from DBA in that way. This is where a pair of lurkers (wood elves? pixies? sprites?) would be worth their weight in gold for that Elven army...